Cryptid Clash (#1.3): The Thunder of Madness 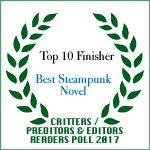 Tatzelwurm vs. Beast of Dean

With a sound like gravel against bone, it began to purr.

After the bloodiest battles of World War One, two desperate plans are set into motion.

A German soldier is dispatched from Austria, accompanied only by a box. This box contains a cat-like reptile, desperate for blood. He is to take this monster—this tatzelwurm—into the heart of Britain, and let it feed.

Two women, a scientist and a mage, work to end the war. From the mystic energy of the earth itself they will produce a weapon so terrible that all the nations of the world will give up war rather than face it. But there is something in the forest. Something that intends to stop their weapon. The Beast of Dean.

As the players slowly draw together,war will be joined. Their own, mystic war.

From David Annandale, The Thunder of Madness is third volume of Cryptid Clash!, a series which pits cryptozoological creatures against each other in fights to the death.

Be the first to review “Cryptid Clash (#1.3): The Thunder of Madness” Cancel reply