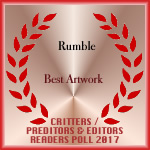 Like thunder rolling beneath the sands, the mole person could feel the worm roll by. The sand tented just enough for it to track where the storm was headed: straight for the feeding frenzy.

Something has gone wrong in Mongolia. Morgan Industrial Technologies’ natural gas station has gone dark. No communication in or out, it seems, and the satellite imaging shows the station wrecked. Wrecked as though everything has descended into a warzone.

Which perhaps it has. The station may have been working on more than natural gas. Mongolian Death Worms, the olgoi khorkhoi of lore, have attacked this base–ripping up anything on the sands, and rending the foundations of the structures. At night, the Eaters in the Rocks emerge, ripping people apart and eating everything they can get their many limbs on. To say nothing of the other dangers–a wild man whose flesh is carved with arcane wards, young Mongolian eco-terrorists, and, most dangerous of all, an office bureaucrat.

Cecilia Stonecipher’s mercenaries will descend onto this station. But is modern firepower enough?

Be the first to review “Cryptid Clash (#1.5): Rumble” Cancel reply