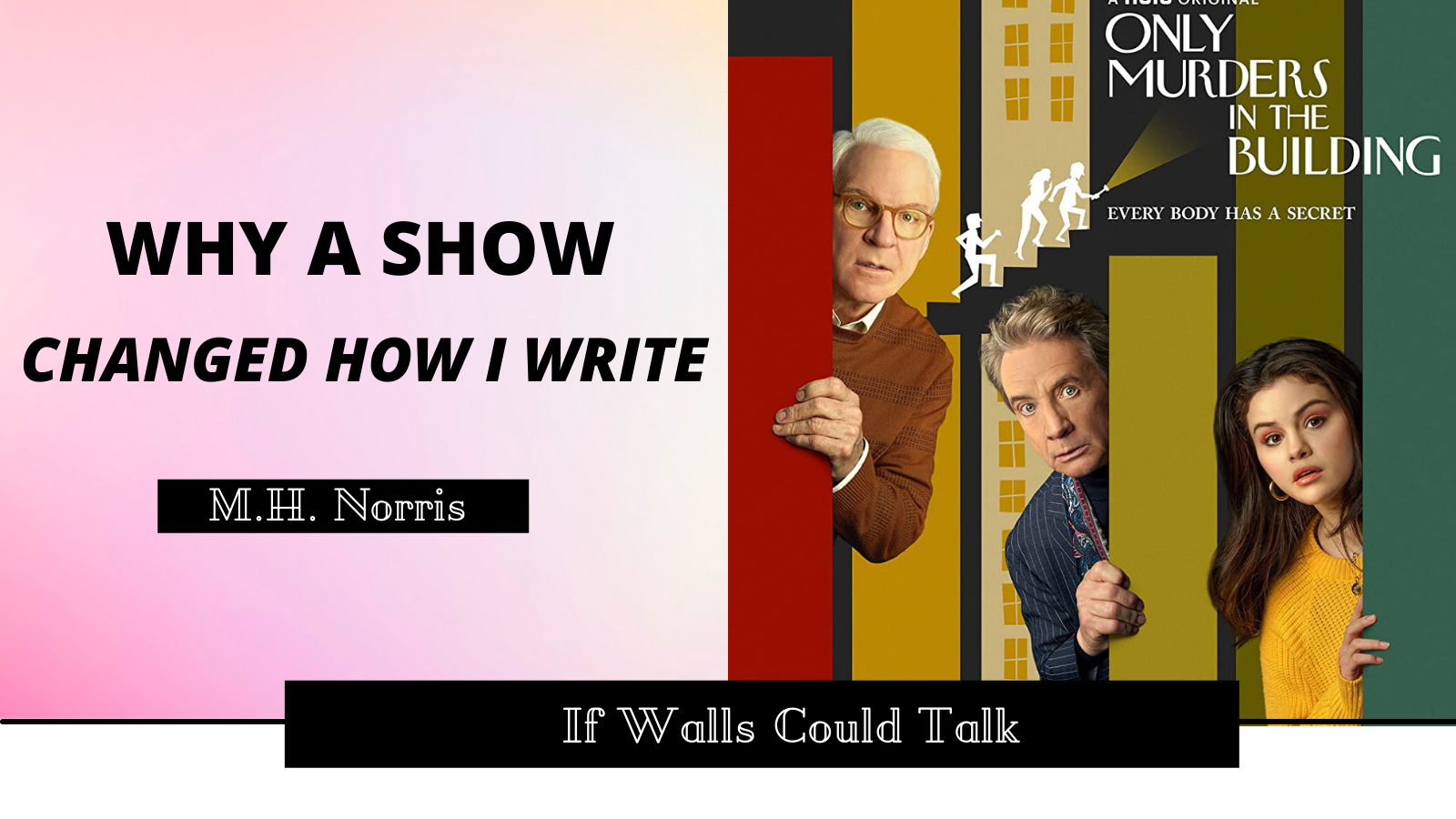 If Walls Could Talk: Why a Show Changed How I Write

This is an analysis of Only Murders in the Building. I will freely talk about the twists and turns of the series. Massive Spoilers are coming your way, including the identity of the killer.

Consider this your enticement to watch the show if you haven’t!

Who is Tim Kono?

What happened that night?

Hulu’s Only Murders in the Building seeks to answer these questions and many many more during their 10 episodes first season. Starring Steve Martin as Charles Haden-Savage, Martin Short as Oliver Putnam, and Selena Gomez as Mabel Mora, this genre-defying show is easily one of the best-written pieces of television I’ve seen in a long time.

What exactly do I mean by genre-defying?

Comedy shows tend to feel like sitcoms but this show has all the suspense of a thriller, all the laughs of a comedy, and the characterization of an  Aaron Sorkin show (and for those of you who know me, you know just how big a compliment that is). As a rule, I don’t like comedies. It’s nothing more than a personal preference; I just gravitate to dramas.

But, this show hooked me in, and over the course of three different TV nights with friends, I devoured all ten episodes.

To me, this show changed how I write mysteries. In order to properly explain how so, I am going to spoil the entire season in the paragraphs to come. If you haven’t seen the show and want the thrill of guessing who did it, bookmark this and come back when you’re done.

When Jan and Charles sat down for their date, I shook my head and watched. To me, this was nothing more than a throwaway characterization scene where maybe we’d get some back story or a stronger point of reference for Charles.

The pair talked a bit about their pasts. In the process, Jan makes this comment, “The ‘being second’ thing for me is kind of a theme. So, the last guy I was dating never put me first. I mean, he wouldn’t let me order food first. If we both had to pee, he’d pee first. I mean, whatever. My therapist says we’re all driven to recreate the dynamic of our first wound, so we can change the ending.”

And beyond thinking her last boyfriend was a jerk, I thought nothing of it.

But I should have. Because at the end of the season it turned out that that throwaway line was the key to everything. It was the heart of the whole case. Tim ended his romance with Jan and then bought a ring which made Jan feel like a second choice.

“You know how I feel about being made second,” Jan tells Charles. “That’s a big trigger for me.”

While Jan was my favorite (even though the stabbing made for an excellent eleventh-hour red herring) by the end of the season to be the murderer, the fact that it boiled down to a throwaway line that I’d dismissed BLEW MY MIND.

This wasn’t the only place where dialogue played a big role, but it is my favorite. This taught me about the use of space. A scene I thought was nothing more than character building had massive implications for the plot. I totally misread the situation. To be honest, I’ve never been so happy to be wrong.

What did I learn here?

Seemingly filler scenes can play a big role. Lines have power even down the line. Odd bits of characterization can come back in surprising ways. Every scene can and should tie back into the bigger mystery, and maybe scenes I’ve cut for pacing or because they seemed extraneous can be the scene the entire story hinges on.

Charles is a washed-up (you’ll never hear him use that term) actor. Oliver hasn’t produced a hit on Broadway in my lifetime. And Mabel… perhaps she has the biggest secrets of the group. It’s obvious when the three meet that they have nothing in common except for their love of true crime.

While a podcast brought them together, it’s a murder in their building that forces them to leave their comfort zones and change their lives.

As discussed above, Charles’ love life has significant implications for the finale.

We learn Mabel once dated Tim Kono and was close friends with another suspect. She was even present when another murder happened in the building. Uncovering her secrets leads them down a road that gives them pieces of their answer. Turns out, one of her best friends from ten years ago is Charles’ prime suspect. Clearing his name gives them a whole new mystery to uncover.

And Oliver. His layers are different. Turns out he has an in with another mystery in the building. His past intertwines with theirs. There’s also his family, his finances, his past.

On top of that, there’s an entire ensemble. Residents of the building past and present. The Detective who declared Tim Kono’s case to be a suicide but finds her mind changed when her wife stumbles across the trio’s podcast. Everyone has secrets, at least half the building has a motive for killing Tim. Some have means and opportunities as well, especially since the cause of death isn’t clear at first.

This many characters, this many moving pieces could easily become overwhelming but the writers weave a canvas so complex at just the perfect pace.

There are no truly extraneous characters. Everyone in the large cast is either directly tied into the murder(s) or sheds light on the case. Every character adds complexity. Each character adds to the whole. It’s something I’m excited to try in my writing.

To be honest, I hate serialized mysteries with few exceptions. To me, they almost always have pacing issues. They move too slow, focus in weird spots in order to get you to question what you think you know, and rarely deliver a satisfying mystery.

But Only Murders in the Building does not have this problem. It uses the sheer amount of characters, the complexities of the secrets, and an extra mystery or two to keep you on your toes for the entirety of the ten-episode season. Each episode has a self-contained plot focus and its own beginning, middle, and end. It’s refreshing, and it works so well.

Pacing is something I struggle with. It’s been one of the hardest things for me to manage going from novellas and short stories to a full-length novel. How do I weave a story that can last upwards of 60,000 words?

This might be where Only Murders in the Building influences me the most. Red herrings are a weak spot for me. There’s a subtle nuance to it that sometimes I feel I lack. But to watch this show places multiple interwoven into this gorgeous tapestry?

What if every chapter in a mystery novel is as “self-contained” as this? What if I build a tapestry with my cases? It’s exciting to think about.

When we hit the end of episode 10 and that final round of credits was rolling, to be honest, I felt like a fraud. Up to this point, I felt like I was on par with a lot of mystery writers on television. Perhaps that was a bit vain of me, but it’s the truth. But seeing this gorgeous mystery play out made me feel so inadequate. But it was also a creative shot in the arm that opened my eyes to new possibilities!

I tossed the entire draft of Rosella’s first novel. Looked at it, said no, and opened a completely new document. Oddly enough, it was freeing. As far as I’m concerned, the project will be better for it. I’ve learned so much, and I am excited to put it into practice.

There were so many lessons I learned from Only Murders in the Building and I can’t wait to use them all in projects to come.