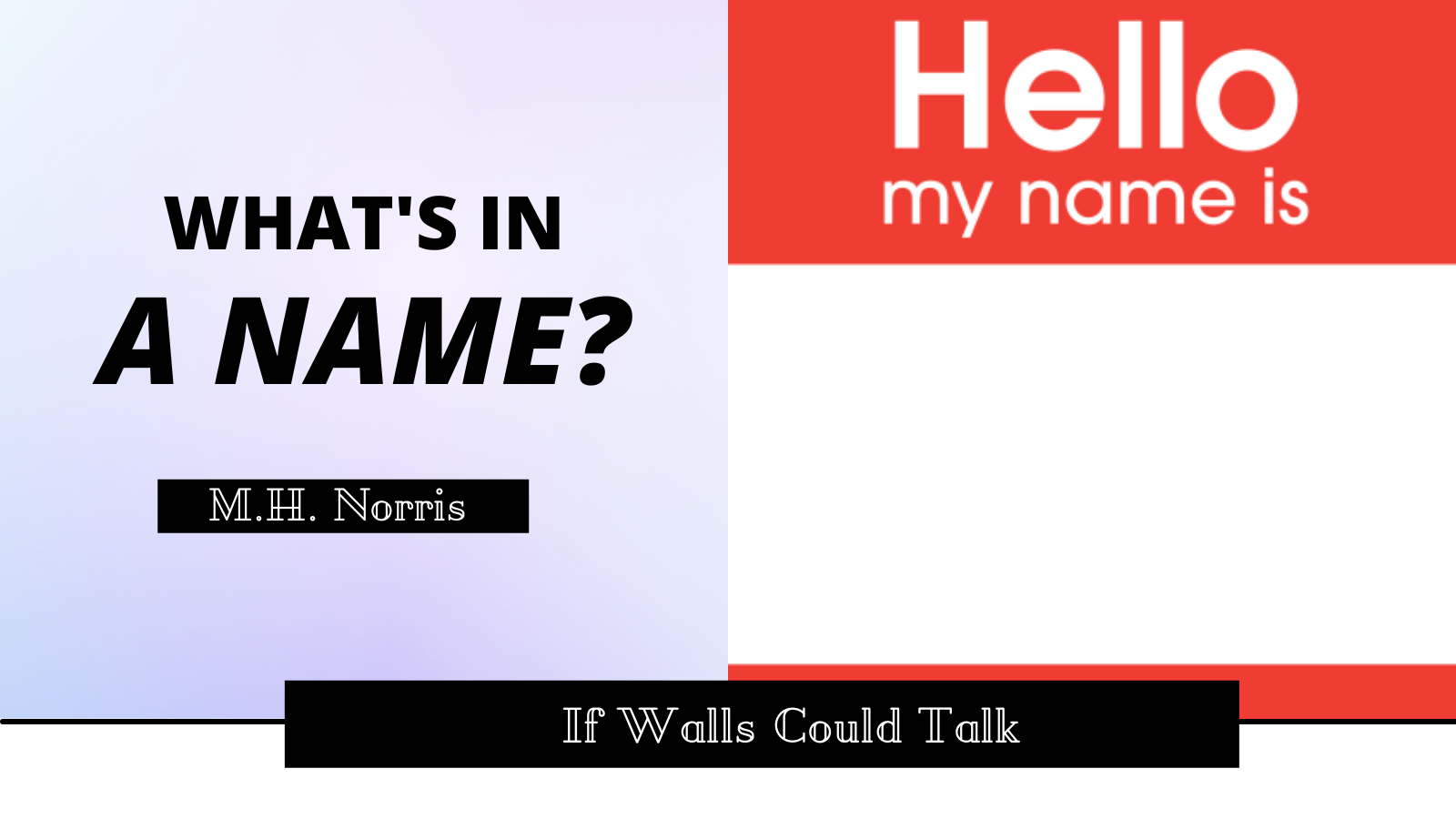 If Walls Could Talk: What’s in a Name?

So, here’s your fun fact. My name almost wasn’t Mary Helen. It’s odd to think about that I came within weeks of being named something else entirely.

I was almost Helen Marie. I was named after one of my grandmothers.

But, a few weeks before I was born, my mom mentioned my name to a friend. They said that if I was named after one grandmother (her mom’s middle name was Helen) that I should be named after both. Marie became Mary, after my other grandmother.

It was a couple of weeks after I was born before the Mary in Mary Helen learned about the switch.

Our names are at the center of our identities, at the core of who we are. Some we’re born with, some we give ourselves, but we carry them with us.

I put a lot of weight into naming my characters. While yes, Rosella’s name came out of a name generator, it actually helped to shape her as a person. Before I found the name, Rosella only existed in the vaguest senses.

But once her name arrived, so did most of her character. I searched the origins of the name. It’s Italian. So she became Italian American. Her parents were both born in Italy and moved over. Rosella, of course, means rose. She earned her thorns.

Naming people and places are one of my least favorite things about starting a new project. It’s one thing if it’s a character that you’ll only see for a few pages, or a suspect that I’m just throwing in to throw you off. The trick is that you don’t figure out which names I agonized over to make sure they fit the character and which ones I just grabbed off a generator or my bookshelf (yes, I’ve glanced over and meshed authors names together). But it’s another when it’s a character that will stay with you for hours – or for years.

There’s another project I’m working on at the moment, one of two books I’m writing. I’m in the… honestly I’ve lost count of the drafts on this one because it hasn’t been working. James and I sat down and had a long talk over how to make it work.

And we decided to add a character. She’s going to play a significant role in the story, and I may use her again.

She doesn’t have a name.

And it’s driving me nuts.

Because a name tells us so much. Where is she from? Where is her family from? Does she have a nickname?

Right now, she’s formless, the beginnings of someone who will impact a story that I’m working so hard to bring to life. But she doesn’t have a name.

I’ve started tossing names around but one hasn’t spoken to me yet. I’ll probably do it a few more times. I may even throw up several different name generators. But when I find it, I’ll know.

Rosella came from one set of names and Tassoni came from another and then I threw them together. I won’t be surprised if that’s what happens with this one.

So what can you do if you find yourself in this situation?

1) Use a Name Generator

My favorite is here. I use it for a lot of things, not just people. There are tons of these around the internet and some writing programs have them built in.

One thing I love about my favorite generator is that it gives me a list of ten names in whatever category I select. It makes the picking and choosing method easier.

2) Use a Character Generator

I use this one often. There are features there which allow me to create a character and will even give them a bio. I’ve used this for throwaway characters a few times. It’s a quick and easy way to help me give them some depth.

Some authors may view it as cheating. But if a character is only in a few scenes, it helps if they have some personality – but to be honest my creative energy can only go but so far.

Another thing I love about this method is the names are more general. It was a similar tactic to how I named Rosella. I went in a name generator and spit out names and then built the details around that.

If you hear of a name you like, write it down. There are notes apps on most phones that are handy (there’s also the Google Docs app if you’re looking for one – you can see some other options for writing on your phone in last week’s article), and paper is everywhere.

I am very much a person who has to write down things while I’m thinking of them because I will not remember later. James will be the first to tell you he’s gotten tons of messages from me with random things because by writing it down will help me remember.

Names are hard. They make us who we are and they help make our characters who they are. Maybe some people have the gift of naming characters and finding a name that fits like a glove but I’m not one of them.

How do you figure out your character names?