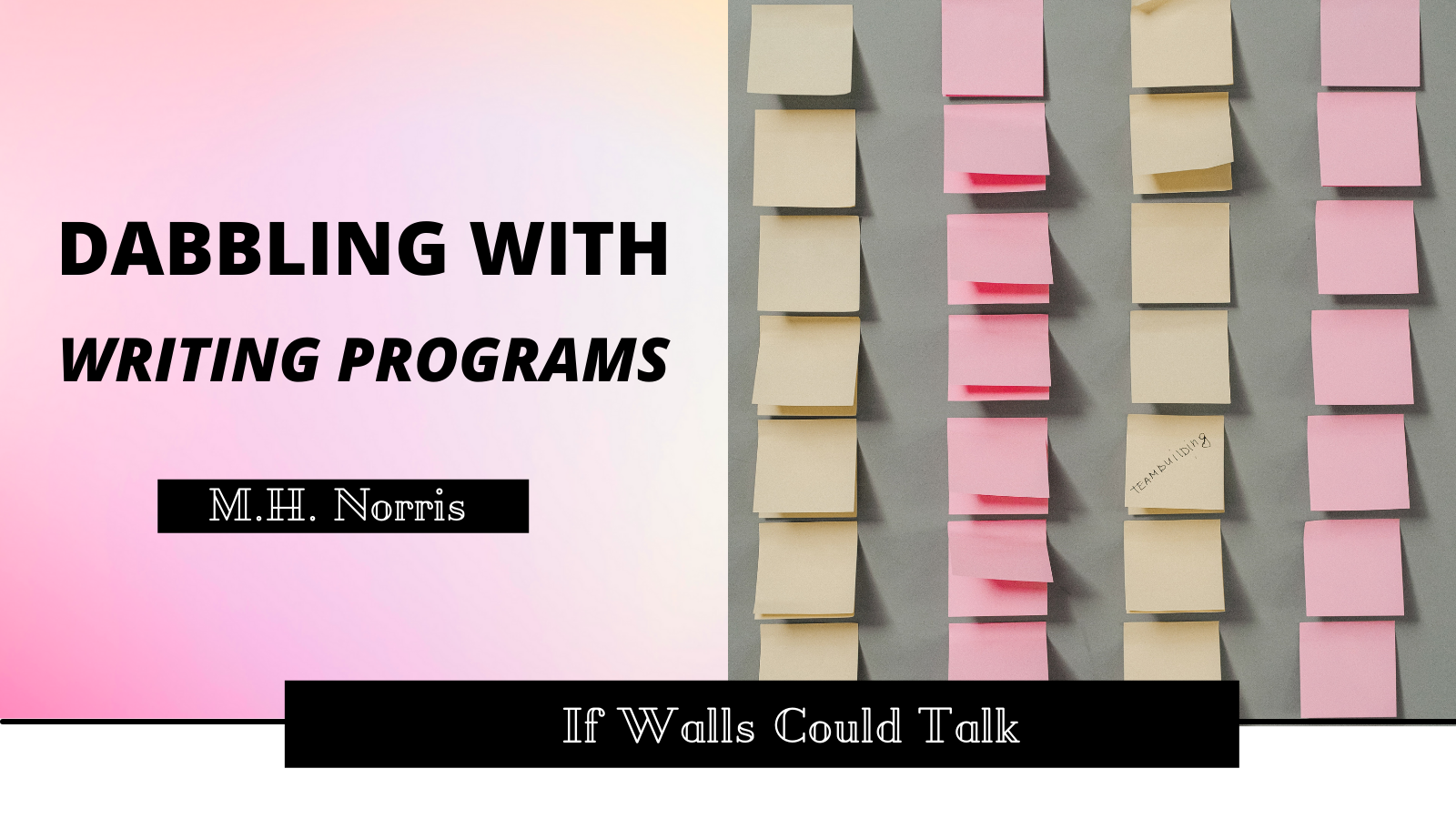 If Walls Could Talk: Dabbling with Writing Programs

Two weeks ago, we dove into some writing resources that make the writing life so much easier. I briefly mentioned word processors in “Resources Every Writer should Have,” but I want to highlight some of the programs I’ve used over the years. I’ve written books in most of these; I want to help guide you toward the program that works best for you.

To be clear as I start, there is no right or wrong answer. You may go through a few before you find one that works for you. Your computer may influence what program is right for you. As I’ve gone through a few word processors over the course of a decade of professional writing, I want to share my expertise with you.

We’re going to start with the free option for that very reason. Google Docs is part of the Google Workspace. It’s a free alternative to Microsoft Word with a lot of features that make it a solid option.

As mentioned, it is free. The biggest disclaimer is that there is a limit to how much free space you have on your Google Drive but if you’re mainly putting documents in there, it will take you a long time to hit that maximum.

One of my favorite features of Google Docs is the ability to collaborate in real-time with other people. James is added to most of the docs in my drive for that very reason. You can edit, comment, and chat in real-time. Plus, it sends you an email if your collaborator makes changes.

There’s also an app for this too and editing on the fly is fairly easy.

Fun fact, I’ve actually written an entire article of If Walls Could Talk solely from my phone.

Personally, I’m not a fan of typing long pieces on my phone, so for me to sit down and type over 1,000 words in a sitting just from my phone was an accomplishment.

The main downside is that formatting options are somewhat limited, and you’ll be challenged to do much beyond basic submission formatting (and even some of those steps can be a bear with Google Docs). While you should never rely on spellcheck over a human editor, Google’s is particularly doubtful. I’ve seen it recommend words that are either simply wrong in context, or non-existent words two steps away from a keysmash.

Some novel-length manuscripts will cease to load properly. I know a writer who had Google Docs freeze entirely around the 200k mark. That won’t be a problem for everyone, but you might want to break large documents into several parts.

But Google Docs is a solid free option. The main reason I don’t use it as my primary writing software is that, like with Microsoft Word, everything is in one giant document and sometimes it overwhelms my brain.

The solution to that?

Give me time, I’ll get there.

You can find the professional version of Google Workplace here. The consumer version can be found via any Google account.

As the industry standard for submissions, a lot of writers take it to mean that that’s what they should write in. It’s what I started writing as I began my professional career. Most writing software has a feature that allows you to export some or all of a document to Microsoft Word.

Microsoft Office has three personal plans: a single download key of the suite at $69.99 a year, a family pack at $99.99 per year, or a one-time download of $150. The final option resembles how Microsoft Office used to be sold.

Honestly, I wrote a couple of books (that will never, ever see the light of day) solely on this. The longer a document gets, the longer it can take to start up. On a slower computer that can be especially frustrating.

On top of the program, there is an online version and an app. If you want to go this route, you’re going to have to experiment with what works best for you.

As I type this, I realize that I sound rather lukewarm about this option and I am. Yes, this is the industry standard and you should format your documents for it unless otherwise stated. But for actually writing in it? There are far better programs and the price tag isn’t great for what it brings to the table. It can be invaluable for editing and especially formatting, but I’m cold on it for lengthy writing.

You can find Microsoft Office here.

Through a good chunk of college and beyond, this was the program I used. I wrote Notches, The Whole Art of Detection, and Midnight on this program.

If you are a Mac user, I highly recommend this program. I will admit there is a bit of a learning curve but when you get the hang of it, it’s amazing.

One of my favorite features, probably the one that drew me to it, is that it allows you split the document up more efficiently than creating headings in both Google Docs and Microsoft Word.

Each chapter can be split into its own document. Each scene within the chapter can be further divided. The process of editing goes a lot smoother when you can easily navigate from scene to scene.

I love that. To me, it increases my productivity. Every scene is essentially a blank page which can be great for inspiration.

There’s also an IOS app as well but unlike the two above, it’s not included in the cost of the program.

Unfortunately, this product loses a lot of the functionality I love about it when you use it on Windows. So when I found this last option, Dabble, I made the switch.

While invaluable for writing, I wouldn’t necessarily recommend it for editing, formatting, or releasing books straight from your computer.

You can find Scrivener here.

I found this program about two years ago, not too long after it launched. Honestly, it was a Facebook Ad that brought it to my attention. I tried the free trial and fell in love with it. While it was still very much a work in progress, it had a lot of the things I loved about Scrivener with the functionality I lost when I switched back to PC.

Like with Scrivener, I can divide chapters and scenes. But it does more. It allows you to set writing goals. I want to write this many words in this many days. It will then show you the goal, how far you’ve come, how far you have to go, and how much you have to do today to say on pace.

They’ve also teamed up with NaNoWriMo and as I mentioned in my other post, you can directly interact with your profile on NaNo’s site.

Dabble is cloud-based and I adore that feature. It automatically updates your document in the cloud which provides a backup in case your device crashes. Having it sync like that allows you to move from device to device.

There’s a web-based version and a program you can put on your desktop. They also made it mobile-friendly but at this time, there isn’t a specific app yet. They add features all the time.

I’ve been using it for a year and I plan to use it for a long time yet. It’s a monthly subscription but there is a lifetime option that I may invest in down the road.

Formatting is visually pleasing but limited, and it’s an open question how well it will export (depending on your goals). I wouldn’t recommend it for editing. But it’s made all the difference for me when it comes to writing.

You can find Dabble here.

As I said as I started this article, finding the right writing program can be tricky. There are lots of options out there and I only covered four.

Did I miss your favorite? Do you use one of the ones I mentioned? Let me know your thoughts! And I’ll see you right back here next week.