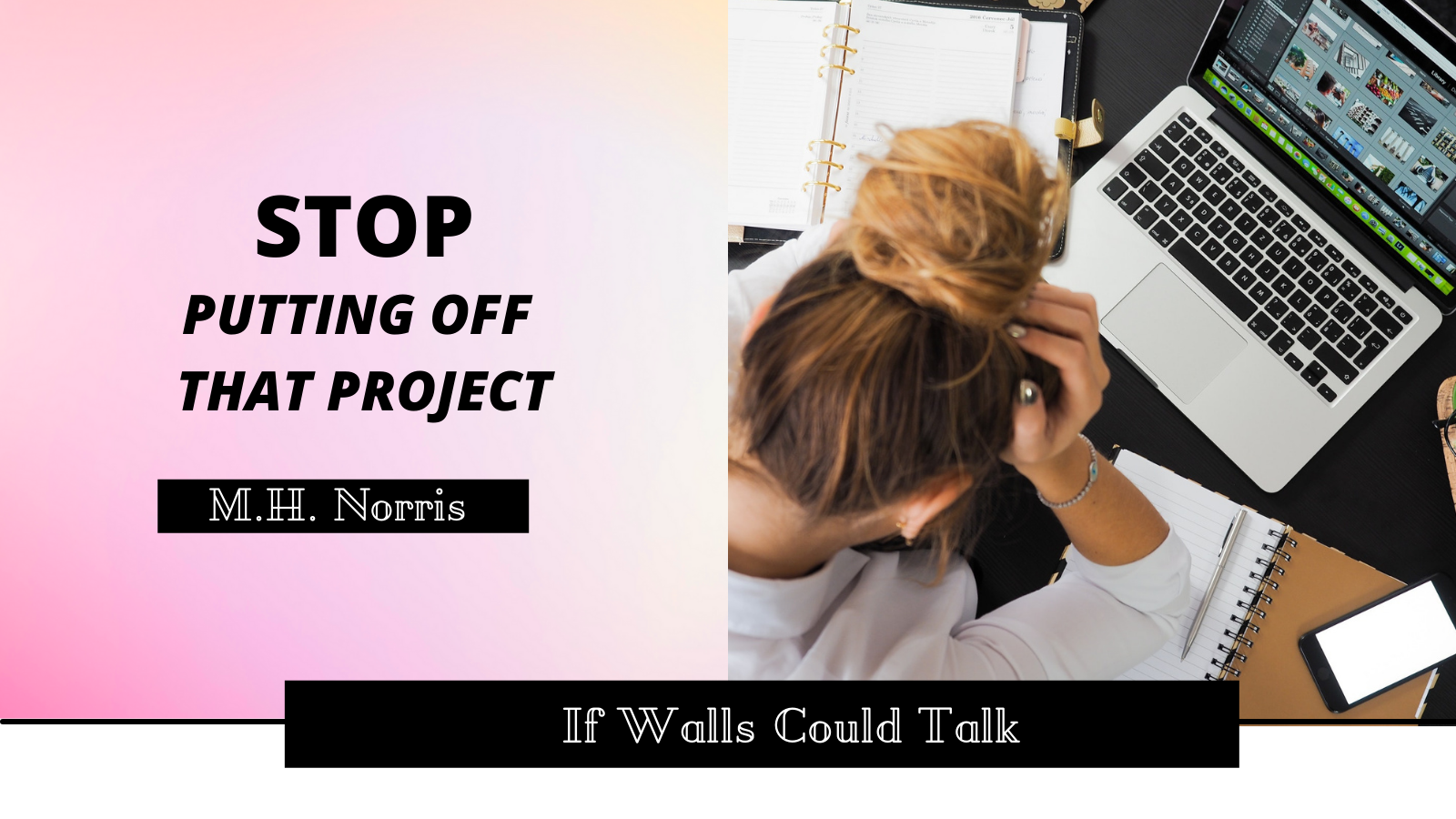 If Walls Could Talk: Stop Putting Off that Project

This might end up being one of those times where I have to practice what I preach. The last several times I’ve posted on social media, I get messages from friends talking about how they saw my post and want to know how I got published.

And often, that question is followed with, “I’ve always wanted to write a book…”

I almost always respond, JUST DO IT.

You might respond with, I don’t know how to write.

Look at my first short story. Trust me, I didn’t know how to write back then, either. More often than not, when I refer to that project I go, “It was a start.”

My first book is the same way. Somewhere in the multiple rounds of complete edits, the first sentence managed to lose its period. When I discovered this, I was embarrassed – but these days, I honestly find it amusing.

It keeps me humble, that’s for sure.

I’ve got a project I’ve been wanting to work on. Two actually. Both are sitting at the very early stages of development. One I’ve amassed a large collection of research materials for. And I mean large. I’m looking over at my bookcase as I type and I’m spotting nine books without looking too hard (plus I’m fairly certain some aren’t in my office for one reason or another).

But they sit there. Untouched.

And I tell myself… I’m dealing with health issues (to be fair, this one is a legitimate reason). I don’t have time. I’m tired.

So they continue to sit.

What’s your reason for why you’re not working on a project?

Learn As You Go

Is it because you don’t know how?

When it comes to writing, there’s no better teacher than experience. I love the craft of writing because it lets me continuously learn. And I love it. I love learning things about the topic I’m researching. I love learning more about this craft that means so much to me.

Remember how I mentioned a few weeks ago about giving yourself grace? Trust me, it’s something I still struggle with. My therapist is encouraging me to do so. One thing I’ve been doing is to allow myself an hour to play through Horizon Zero Dawn. I actually restarted last week and I’ve almost caught up to where I was previously (that’s on the to-do list for the day).

If you didn’t read that post, please take a second and do so.

Give yourself grace. And while it wasn’t the point I made originally, part of that is knowing that things will not be perfect. Trust me, I’m a Type One on the Enneagram and I really do manifest the “harsh inner critic” stereotype. James has to continuously remind me that things aren’t as bad as I think they are.

Someday, I’ll believe him when he says it.

A few months ago, I had someone message me that I have a distinctive writing style. Honestly, it’s grown even since a lot of you last saw it. The process of growth between “Midnight” and Jazz Street will definitely show that years passed between me writing the two pieces.

Your first piece will be rough. Even as a finished product.

Did you know that Tolkien released a revised version of The Hobbit years later, making significant changes to Chapter 5? In the original version of the chapter, Gollum offers up the Ring in the Riddle game and once Bilbo wins, he willingly shows him the way out. But as Tolkien went on to write what became the rest of the series, he had problems with Bilbo’s claim to the ring and thus went and changed it. Frankenstein went through multiple editions with fairly substantial changes. It was also Mary Shelley’s first novel, and first substantial piece of writing.

Even writers who are considered the best in their fields (or of all time) are honestly making it up as they go along.

You are a Real Writer

Some people tell me that they won’t write their book or stories because it’s just a hobby, they’re not a professional. Or worse, that they’re not a “real” writer.

First, it’s a wonderful thing to have a hobby. One thing I quickly learned in the early days of the pandemic was how few of my friends had hobbies at all. The thought never occurred to me. Between writing, reading (A LOT), playing video games (CPU, Switch, and my recently acquired PS5), cosplay, and tabletop I’m not short of things to do. But, as everything shut down and we spent a lot of time in our homes, I realized that I was an exception not the rule (at least among people I know in person).

For some of you, writing is purely a hobby. There is nothing wrong with that. Being a hobbyist does not make you less of a writer than someone who wants to make this their career. If you’re a person who picked this up for yourself, that does not invalidate your work or your desire to write.

You are a real writer.

So don’t put off writing just because you’re not making it your full-time job, or just because you do it for fun. Your dream projects matter too. Whatever it is, please write it.

A lot of people tell me that they don’t have time.

My favorite argument against the “I don’t have the time” argument is the story of the timeline of writing my first book.

I accepted the contract to write it in January 2014. It has been a…rough few months for me and I took on the project as a way to ease me back into writing. At the time, I thought I was going to craft a ten thousand word short story (at that point, similar projects were the bulk of my writing credits) but instead I got offered the chance to write a novella.

I embraced the challenge and spent the rest of January and a good chunk of February researching and outlining the project. I wrote the first draft in March, edited and did rewrites in April, and turned it in the first week of May.

At the same time, I was going to school full time, working a job, running the creative writing club, and doing serious developmental work on a web series (that will never see the light of day).

The thing is, that story is all too common for writers. Those writers who can do this full time are seriously in the minority. Even New York Times Bestselling authors are working day jobs.

But that’s an extreme example, and not one I recommend.

What do I recommend? Sit down and write even a sentence every day. You’ll reach your goal in the end. You can do this, even when you’re strapped for time. Setting a word goal and writing toward it in sprints has done wonders for me.  I’m rooting for you.

You won’t regret it, truly. Honestly, working on a project that’s been kicking around in your brain for a bit can be such a freeing feeling.

But don’t just give yourself grace when it comes to quality. You need it when it comes to time. I have a lot I’m working on and it’s easy to chew myself out for slowing down or, yes, putting projects to the side while working on other things. As much as I’m fired up to work on everything all at once, I also need to focus. It’s a balancing act.

What are you Waiting for?

This whole post has made me want to work on those two projects that have been stewing on the back burner for years. One of which I have no idea what to do with it and the other I’ll have to pick up some new skills to properly see it done.

But what are you waiting for? What’s holding you back?

Even if the project sits on your hard drive and collects digital dust, you’ll still have it finished.

So what project have you been putting off? And what steps can you take this week to bring it closer to completion?

If you want to share, you know where to find me.