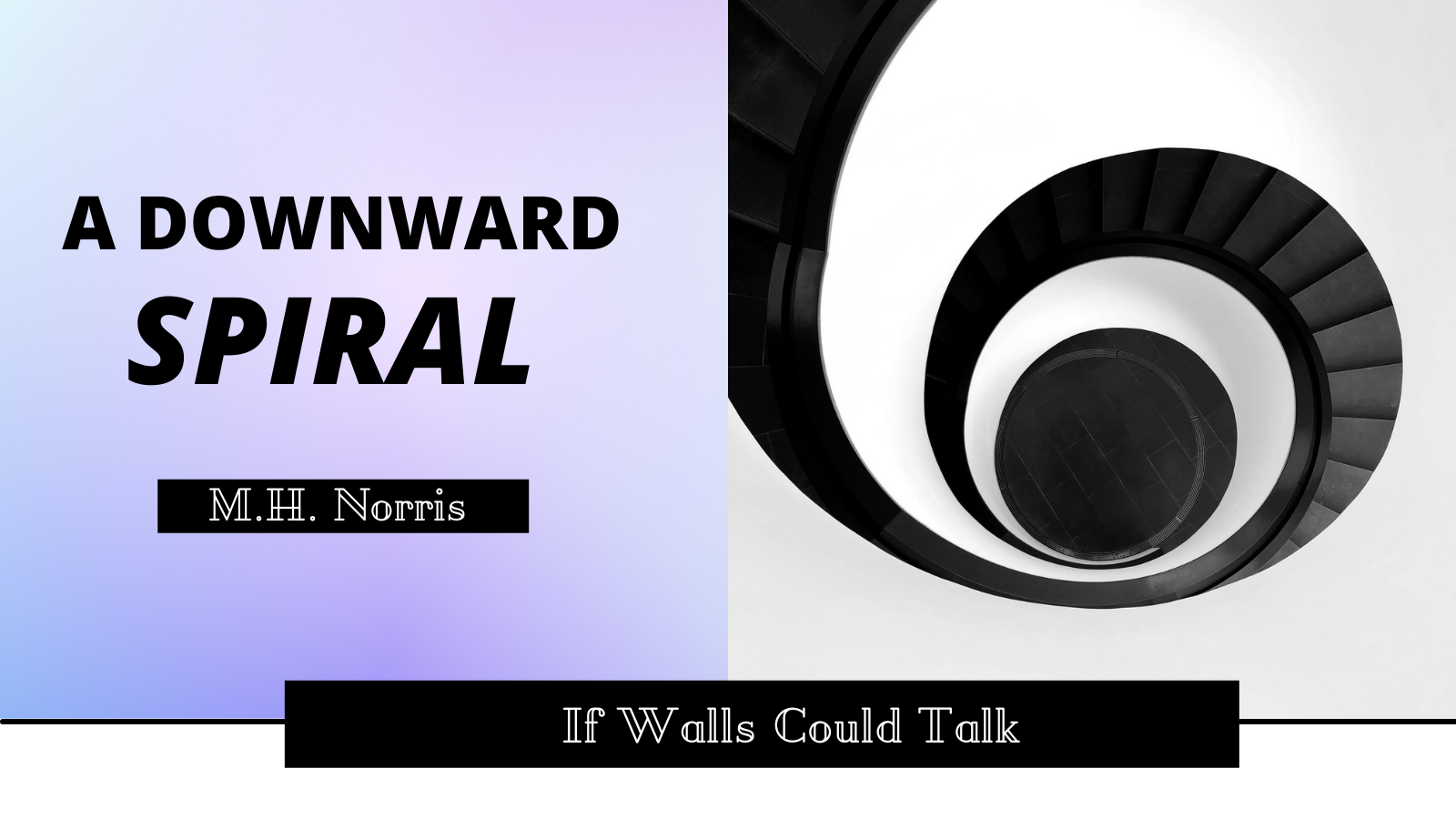 If Walls Could Talk: A Downward Spiral

You would think that returning from vacation would mean that you’d be bursting with energy. That a week away at one of your favorite places on the planet was just what you needed to recharge your batteries and you’d be bursting full of creative (and literal) energy.

Unfortunately for me, that was not the case. If anything, the return to reality has been absolutely draining. I’ve barely managed to get anything on the page this week and have had the least productive week I’ve had in months.

And for me, that loss, that lack of productivity, is hard. On the Enneagram, I’m a Type 1. Now, I know these days they’re trying to rebrand it as “The Reformer,” but for years and years it’s been “The Perfectionist.” Let’s take a moment to be perfectly honest with ourselves, the latter is more accurate and I’m not ashamed to admit it.

I can be a perfectionist. I am a perfectionist. I set obnoxiously high standards for myself (especially when it comes to my writing) and often feel I don’t meet them. It seems like half of James’ job as my editor these days is to tell me my stuff isn’t awful and that I’m not allowed to chuck it all out.

So when I have weeks like this, it can cause a spiral. I can beat myself up because things aren’t getting done and then I feel guilty that I haven’t gotten things done. Before I know it I’m in the completely wrong headspace to do any creative work and am in the middle of a rather vicious cycle.

My therapist and I have talked about this. How I need to give myself grace.

It’s really hard to come and write this column about my complete and utter lack of inspiration this week after spending weeks talking about how things have inspired me. But it seems as if that inspiration stayed in Florida and is taking its sweet time getting here. Even writing this column took far longer than it should because I just wasn’t inspired at all.

So what can you do when you find yourself in a similar spiral?

The other night, I had a lot of things happen during the day. Things that were completely out of my control. It was frustrating because I’d had the intention of writing all afternoon and catching up on projects only to have things come up the morning of.

Not a single thing on that list got done.

But I decided to listen to my therapist and give myself grace. I read. I played video games. I attempted to recharge my drained batteries to better face the week ahead.

Walking away was the best option there. I’ve learned forcing myself to write will very rarely result in usable material.

When I get home from work, I need time to decompress before I can bring myself to write. Sometimes, that takes different forms. Sometimes I’ll watch an episode of a show (I’m so far behind on my shows right now I could cry), other times I’ll catch up on chores around the house, still others I’ll read and sometimes I’ll trick my brain into doing writing work by reading some research for an in-progress project.

If you need time to decompress,  walk away and fill the time with something that needs to be done. Maybe you aren’t getting your creative writing list done, but checking other things off might help. That feeling of accomplishment might fuel a few hundred words.

3) Find Someone to Talk To

Talking helps. Maybe there’s something bothering you. Maybe you just have too much on your plate. Maybe things are rough right now. Talking helps. I’ve said time and time again that writing isn’t a solitary task. It takes a village to bring anything into the world.

And sometimes it takes a village to make sure you don’t fall down a spiral.

To be honest, I have five projects going at the same time right now. They’re in various stages of completion. While that may sound utterly insane and overwhelming (and at times it very much is), it can be freeing. If Novel A isn’t behaving, we can slide over to Project B or C or D.

Sometimes you need a palate cleanse from a project. Walking away from a project for a bit can help you make great progress when you return.

Honestly, that’s why I always have to “cheat” at NaNoWriMo. I can’t settle down on one project for 30 days. But between a handful, I can easily do the 50K.

Taking care of your mental health can be hard. It’s not a visible injury or stumbling block so it’s easy to ignore.

Most importantly, it’s important to know that spirals like that are more common than you think. Far too often, we don’t talk about mental health issues in the writing community. But if you ask a lot of us, we’ll be honest that if we aren’t currently going through something, we have in the past.

You are not alone in something like this. And I can’t promise you things will get better quickly or that they’ll stay better forever. But I can promise you that you’re not alone in this. One of the things I wanted to do this year was to be a bigger advocate for both Migraine Awareness and for Mental Health Awareness.

So here I am, being brutally honest with you. Sometimes I get so caught up in my own head I can’t write. And unfortunately, over the last few years those days have outnumbered the ones where I’m good and writing freely.

For a few months, I was on a roll.

And then I hit this past week. And it felt like I’d gone back to square one. But I haven’t really. It was just a bad week. Next week will hopefully be better.

Then I’ll have to listen to my therapist, give myself grace, and keep trying. I’ll have to keep telling myself I can do it.

And I believe you can too.