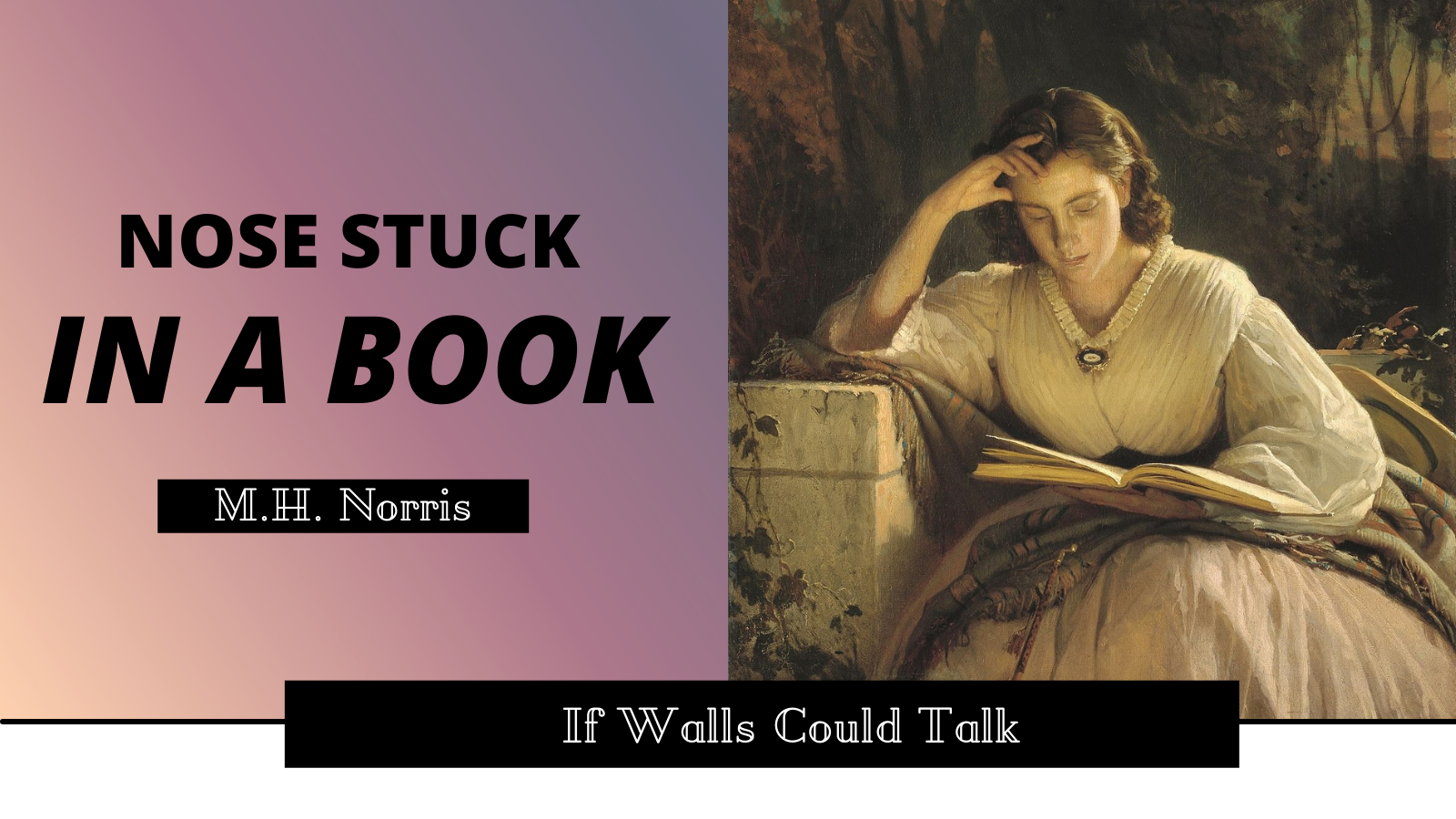 If Walls Could Talk: Nose Stuck in a Book

Any writer will tell you that good writers read A LOT. Even I’ve suggested it a few times over the years in this very column. Writers have often been compared to sponges; they take words in via reading, and squeeze themselves as they write.

For some reason, honestly, I’m not completely sure why, I dramatically slowed down on my reading over the last few years.

Well, I did until a couple of months ago.

At the time of writing this article, I’m on book 18 of the year. When this releases, more than likely I’ll be on 19. And it’s not been one genre. I’ve read For Dummies books, podcasting books (is that perhaps a tease of something I’m working on), true crime, Brandon Sanderson, Preston & Child, and even more.

Some of my reading is so I can prepare for projects I’m working on, but some of it was honestly just for fun. Friends gave me recommendations and I stared down my to-be-read pile – and decided that either I tackle it or it might smother me soon enough. I’ve started trying to be sure I read at least two hours a day. There have been a couple of days I’ve been under and several where I’ve been over that.

The point is, I’m being intentional about making sure I read more again. And honestly, I love it. I’ve always loved reading.

There are two authors who I’ve been getting into recently that I wanted to share with you all along with some of the things I’ve been learning from them.

Writing duo Douglas Preston and Lincoln Child have been working together since 1995. I was 4-5 when this team was born, which is honestly a bit mindblowing if you think about it.

They’re best known for their Pendergast series which started with Relic in 1995. I cannot stress how much I recommend this book. But you also have to read the two after it, Reliquary and Cabinet of Curiosities. That’s as far as I’ve made it in the series if I’m honest. I do have Still Life With Crows sitting on my desk waiting for me to come back and read it. There are 22 books in the series so far which will keep me busy for a bit.

What do I love about these books?

Especially in these three books, you see a lot of the same characters repeatedly. I’ll see if we follow them more in later books as I get there. The thing is, the story is mostly told from what I’m going to call an Outsider Point of View.

The series is named after Pendergast. He is the thread that brings them all together. But we very rarely see the story from his point of view. Instead, we see how he draws others characters in. Honestly, I didn’t even notice that the authors were doing it until book 3. But it’s fascinating.

Not only is there a mystery that the book is centered around, but we get to figure out the mystery that is Special Agent Pendergast along the way. This also helps us get to know other perspectives on the case and each of them tends to have an important piece to bring to the table along the way.

I’ll tell on myself here a bit. Back when I wrote Notches, I intentionally didn’t write an autopsy scene because I thought they were gross. Criminal Minds was a major influence on my writing at the time, and they rarely explore that topic.

But then I discovered Bones. And fell in love with how they used forensic anthropology to solve their mysteries, and that a large portion of their clues are recovered from the autopsy. My love of Bones is a large factor in what inspired me when I was creating Rosella.

In the years since, I’ve grown from not wanting to write autopsies at all to having James hand me a draft and say, “You need to cut at least one.”

Kathy Reichs writes fantastic autopsy scenes. And I’ve not seen anyone match her until I was reading Relic. All three of these authors do a fantastic job at using this to hide details you’ll need later. Preston and Child in particular use techniques I’d love to expand on and use in my own way.

If you’re like me and want to incorporate autopsies into your mysteries, I highly recommend you check the Pendergast books. While they are just a small piece of wonderfully crafted novels, I do recommend them.

This is something that I struggle with and a reason I’ve devoured three Preston and Child mysteries (two within a month of each other – I read Relic about six months ago or so). They are absolutely masterful at weaving pieces in and out.

For example, in Cabinet of Curiosities, there was a loose piece that I couldn’t quite figure out how it fit. But it sat there taunting me. Until I found out how it fit. There’s a reason that the failed Pendergast Paramount show was going to center its first season around this novel. And if they want to try that show again, I would add that to my dream list of shows to write for. I’d write for it in a heartbeat.

Reading has made me feel better and not just creatively. Currently, I’m three books ahead on my Goodreads 2022 Reading Challenge. I’m trying to finish 100 books this year. They’ll be in all different genres. Honestly, changing it up has been refreshing and I’ve discovered some fun series I wouldn’t have otherwise.

So once again, let me join the plethora of writers who encourage you to read more. It’s necessary for the craft. And if you want to stop by my Twitter (@girlinpink44 in case you forgot) and let me know what your reading goals are for the month, I’d love to hear it.

See ya next week!