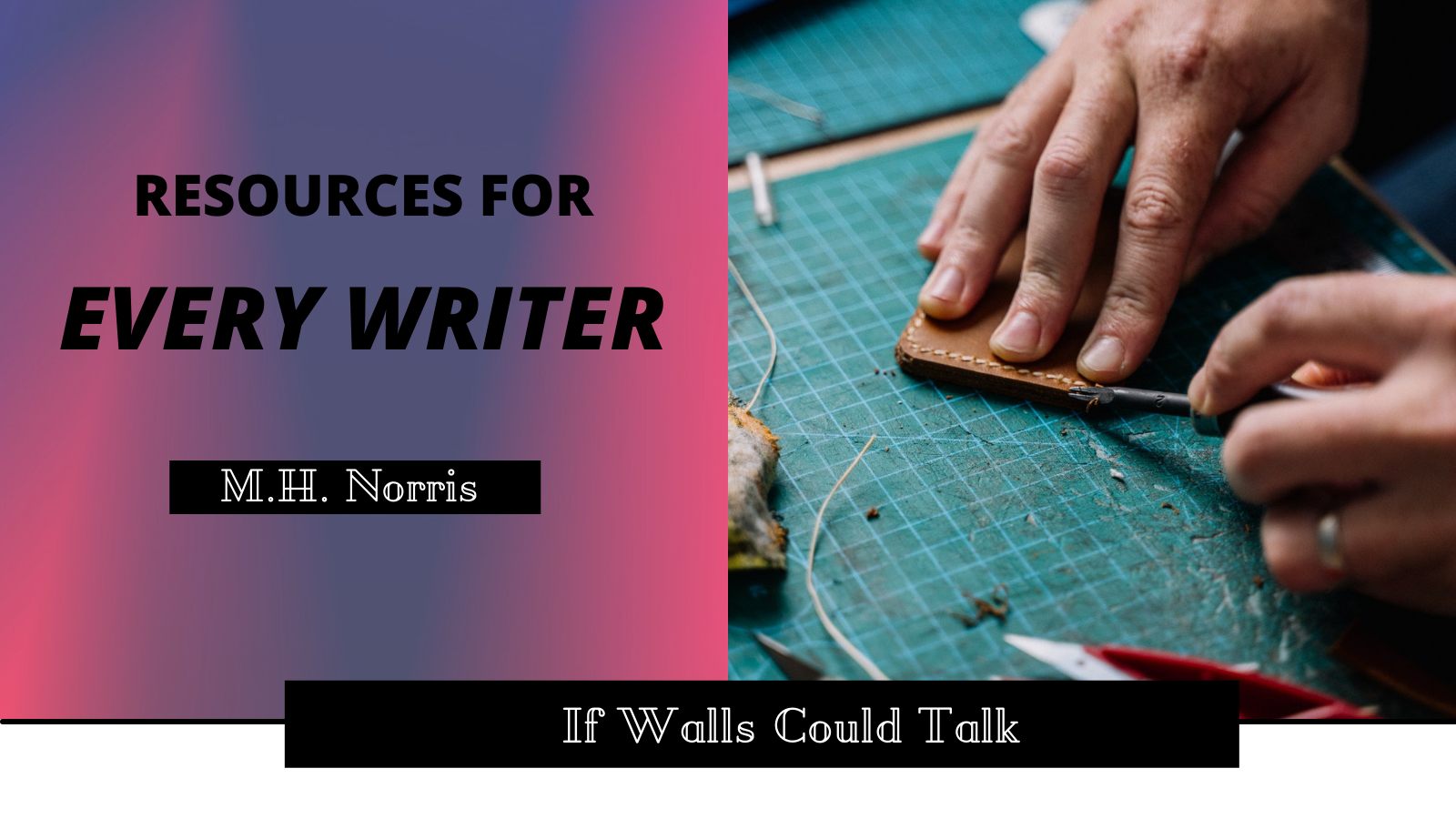 If Walls Could Talk: Resources for Every Writer

Quite a few years ago, I did a version of this article for screenwriters over on the Stage 32 blog. It was recently reposted to their blog, and, reading it over, I realized that I could do a version that catered to fiction writers. While there are a couple of items that will be on both lists, I am including some special tools that prose writers will find more useful.

Most of these are free, while some carry low-cost options. Trust me, I’m aware that as writers we can be the textbook definition of starving artists. We need to make every penny count.

I’ve often said that it takes an army to write a book. While you’re assembling your team, I can share some of my favorite tools…

I’ve been using this novel-writing tool for over a year, and I love it. For years, I religiously used Scrivener but when I switched from Mac to PC, I discovered that its PC counterpart loses some of its functionality. It took time for me to find something I liked just as much and, in the end, I found Dabble. It’s a lot like Scrivener, but more user-friendly and it works wonderfully on PC.

It syncs to the cloud – providing you an extra backup for your work, which is a feature I adore. If you’ve ever lost a draft, you know how much of a life-saver that is. It also allows me to jump from device to device – and even pop in on my phone – and check things really quickly.

Right now, Dabble is super simple and basic and I love that about the project. It also is super easy to switch between projects. And, if you’re like me and do NaNoWriMo, NaNo will sync with your account. That saves me a trip to the website every day.

It’s still a new software. I’m fairly certain it’s not even 18 months old at this point. They’re adding features all the time.

Instead of a one-time fee, it is a subscription-based program. It’s worth looking into. You can find Dabble here.

This is a program I discovered three years ago. For those of you who have never heard of it, it’s a program where you can create boards for various topics. It’s a bit like a virtual white board, but organized into various tags that you can move between columns. It’s incredible for tracking the flow of individual parts of a project. I tend to create boards for books. I even have a board with my writing schedule. I’ve got potential topics for this column there, articles for Stage 32 with their due dates highlighted, and more.

You can also collaborate with this program by inviting people to your board.

For projects with a lot of moving pieces, Trello can be invaluable because you can post documents, set deadlines, and comment on individual pieces. You can move cards around the board; it’s perfect for someone who needs to have things just so, or for a scatterbrained artist who needs the bigger picture put out in a visual form (and yes, I am very much the latter).

I was introduced to this project for one of my former jobs and even though I left ages ago, I use this program all the time.

While there is paid version, you can do a TON with the free version. I highly recommend you check it out at some point. It makes organizing your projects so much easier. You can find Trello here.

Confession time, and I don’t think I’ve ever admitted this publicly. Dr. Rosella Tassoni’s name came out of a name generator. I threw together several generated lists and looked for names that spoke to me. Rosella was in one list and Tassoni was in another and I married them together.

But naming characters, places…anything, really…is my least favorite thing in the initial drafting process. While having a blank page is freeing and thrilling, names are hard. There’s a lot of pressure because a name becomes a part of them. In fact, Rosella’s name helped shape her as a character. Name generators help me consider everything more objectively, and inspire me to meet characters on their own terms.

I have two that I use all the time and I wanted to share them with you.

First is a simple Name Generator. Most commonly I use the Quick Name and Character Name features on this site. Quick Name is good for a one-off character that I just need a name for (honestly, this is where I get a lot of victims’ names in my mysteries). The Character Name feature allows me to create a quick pre-made character bio. I’ve used this for a character that will appear throughout a book, or even a character who appears for only a few scenes that need an extra dimension.

The second is the Fantasy Name Generator. If you’ve never seen this site, it’s a game-changer. This has generators for hundreds of different categories. It can allow you to get rather specific, especially if you need the feel of a name to match an idea for a character. You can easily get lost on this site.

People underestimate the value of Google’s free tools. Docs, Sheets, Slides, Chats, Meets, and more. All of these tools can be invaluable. Fun fact, I write in Google Docs for this column and James is able to see me work and help in real-time.

These are free and you can even export Google Docs as Word documents if you need to go industry-standard style docs. Most of Microsoft Office’s programs have a counterpart in the Google Workspace realm of software.

Another of my favorite pieces here is Google Drive. I store backups for a lot of my files here in my drive (in fact I pay monthly for extra storage at this point). You can leave docs floating or put them in folders. Sometimes, I’ll go through and find gems that I long forget existed.

Did I mention it’s all free?

I watched a project fail because one of the leaders paid thousands of dollars per month for something like Google Workspace. Don’t be afraid to see if the free option already has what your team needs.

There are so many tools out there for writers. There are even a handful on my private list that I haven’t gotten the chance to try yet. In fact, when my article was reprinted on Stage 32 last week, someone recommended a new one to me that I’m super excited to check out.

Do you have a favorite? Is there something you can’t write without? I’d love to hear about them!