Errol Flynn crosses swords with men who take his star-power a bit too literally.

There was a girl in Mr. Flynn’s dressing room. This was not an unusual occurrence, nor was it something that Mr. Flynn tended to complain about. Some would argue it was an unspoken perk of a job like this. Unexpected, gratuitous adoration was rarely worth turning down. It didn’t hurt that most of the girls that came to see him also happened to be stunningly beautiful.

A wry smile. She didn’t seem to have noticed him yet, and he never missed the chance for a grand entrance. He crossed the threshold, clearing his throat.

“Forgive my intrusion.” The smile shifted into a wide, mischievous smirk. “But I’m afraid I’m something of a regular when it comes to that seat.”

Before his second word, she was up, spinning on her heel, grabbing the back of the chair. She stared—eyes wide, mouth agape.

“Y-yes…” Eyelids flickered as she glanced down at the floor. “You’re here. Thank goodness!”

With a few clicks of her heels, she reached the door. Holding it ajar, she cast a furtive glance out into the corridor. The door snapped shut. She held herself against it.

“Well, you certainly have made yourself at home. Although I must admit I like to at least know somebody’s name before we move in together.”

“Ah. Yes. Excuse me…I’m afraid it’s frightfully important that I speak with you, Mr. Flynn.” He was fixed with a firm, blazing stare. “I have something terribly important to tell you.”

“I’m afraid that I have reason to believe your life is in danger.”

“Yes, now, I’m sure you probably think I’m insane. To be perfectly honest, I would likely feel the same. But I swear, there will be at least one attempt on your life. Soon.”

“Of course, of course. And do you have any pieces of helpful advice for this supposed threat I’m going to be dealing with?”

He reached for his coat and fedora.

The girl jerked forward, taking hold of his hands.

“Yes, yes, and I’m sure that now we’ve all been saved from the madness of Jack Warner’s business management.” Finishing with his coat, and with his hat waiting in his hands, he opened the door. With his other arm he outstretched his hand, only to let it swing over until it pointed through the empty doorway. “No doubt thanks to your timely intervention.”

They barely made it out of the room before Mr. Flynn collided with a small man. He had been waiting on the other side.

“Oh, ah, good evening, Mr. Flynn!” The young man beamed, nodding toward the girl. “I wasn’t getting in the middle of something now, was I?”

“No, there’s nothing the matter, George, don’t worry.” He held out his hand, urging him away. “This young lady and I had just about finished our business, wouldn’t you agree?”

Her hands tightened into fists.

“Well, Mr. Flynn,” George continued, “I’ve just been sent down here to tell you that some of the boys have organised something of a party. I know Mr. Isaacs is already on his way over there.”

“Ah, and we should never keep our fearless director waiting now, should we, George?” A flash of teeth, followed by a strained sigh. “Yes. Yes, I’ll be right there. Just lend me a moment.”

With an eager nod, George headed off down the hallway. Mr. Flynn turned back to the girl.

Eyes closed. A deep breath, fingers moving to grip the bridge of his nose.

“Miss, I’m rather afraid that I’m not going to lock myself into my apartment until I’m free of this…danger that you’re so concerned about.” He patted himself down, producing a small notepad and pen. He quickly signed his name, ripping off the page and handing it to her. “There. Now you’ve got something to show for your time. Now please, if you’ll excuse me…”

He strode down the hallway, adjusting his jacket. The girl stood back, forlorn. She crumpled the paper in her fist. Then after a moment, she sighed, and straightened it back out. Now neatly folding the autograph, she tucked it into her bra, turned, and ran in the opposite direction.

Two figures stood at the corner of a hallway. Their backs touched the walls, yet neither one could see their counterpart. This would not be the first time they would meet in this location, nor would it be the last.

“Almost. The Green Light was going to make contact as I left him.”

“Good. You know I don’t like leaving it until this late.”

“It was necessary. The Blood Captain demanded that we allowed him to continue with his work as long as possible.”

“The Blood Captain is an excitable child. We all know he shouldn’t have been give the position he—”

“Watch yourself, Prince. You know how words can sometimes carry in these corridors.”

“As you should. Now, be about your business. We cannot allow ourselves any missteps this close to the Hooded Hours.”

“Only to a better man than myself.”

Soundlessly, they were away.

A young boy perked up, grinning at the sight of who was calling for him. “Yes, Mr. Flynn?”

“Head down to the garage, I’m going to need a lift rather soon.”

A different voice. The young boy halted in his tracks. His smile wavered slightly. He felt George’s hand on his shoulder as the two men caught up with him.

“Make sure Mr. Flynn gets to his party on time, understand?”

Shaking off the man’s hand, Bart nodded, and dashed off.

“You know how it is.” George’s grin somehow managed to get even wider. “They always end up managing to get the slowest drivers, and always when you really need to be somewhere.”

The two men left the building. In the harsh evening, the lots appeared to be coated with rust.

“I find that they seem to do a decent enough job on their own, personally.”

“Well, Mr. Flynn, you have a fair bit more experience than I do.”

“Not to worry, George, we were all a rising star at one point or another.” They paused at the curb, a short, black car pulling up in front of them, and Mr. Flynn moved to open the back door. “Now, let’s see if old Gerry Isaacs can stop fawning all over me when he isn’t being paid to.”

“Oh, no, Mr. Flynn, I—” Protesting hands urged him away. “I’ve still got a bit of work to do back in the lot. I’ll be along in a little while. Please, don’t worry about me, I’m just happy to be giving you the message.”

“Suit yourself, old man.” With a farewell tip of his hat, he pulled the door closed. “Take me home, would you, driver?”

The car pulled away. Only a few minutes later, it was invisible amongst its fellows.

“Who knows? Perhaps the people from the Northampton Rep have finally grown a bit of backbone.”

His mind drifted, eyes glazing over as he became consumed by his own thoughts. The studio car continued on. When he returned to his senses, the buildings that passed them by were unfamiliar. A quick glimpse through the window, and it was clear they were heading out of town.

“Driver?” He leaned forward, not quite tapping the man’s shoulder. “You do happen to know where you’re going now, don’t you?”

“Driver…” His voice carried a wary edge as he shuffled across to the opposite seat, hoping to catch the man’s eye. “There’s nothing wrong is—Woah!”

The driver slammed his foot down on the accelerator. The car jolted. Mr. Flynn regained his balance, gripping the front seat as he leaned forward.

“Are you alright, man? You seem to be trying to get the pair of us killed!”

The driver still didn’t respond, still staring dead ahead as they careened through the streets. His neck glistened with sweat as he stared forward, too nervous to focus on anything besides reaching his destination as fast as possible. A commendable trait, in other circumstances.

Mr. Flynn looked about the cabin, weighing his options. He tried the door, only to find it locked. The windows seemed to be jammed shut. A quick reach across the back seat returned the same result. He looked down to the footwells for anything that may be useful, cursing as he found them empty. He looked up, before having to blink in surprise as he saw…

Pulling up beside the car.

He looked up at the horse’s rider, only to see…that girl!

She flicked her hand upward, urging Mr. Flynn to join her. Without a thought, he leaned back, lying across the car seat. Shoes slammed against glass. A few heavy kicks, and the window shattered outward.

With a bounding leap, he launched himself up, out of the window. His arms wrapped around the girl just as she flicked the reins. The horse galloped.

The car’s engine snarled. It turned into the next lane. Launching forward, it began to charge its target.

“I must say, I’m not exactly used to being on this side of the situation.” 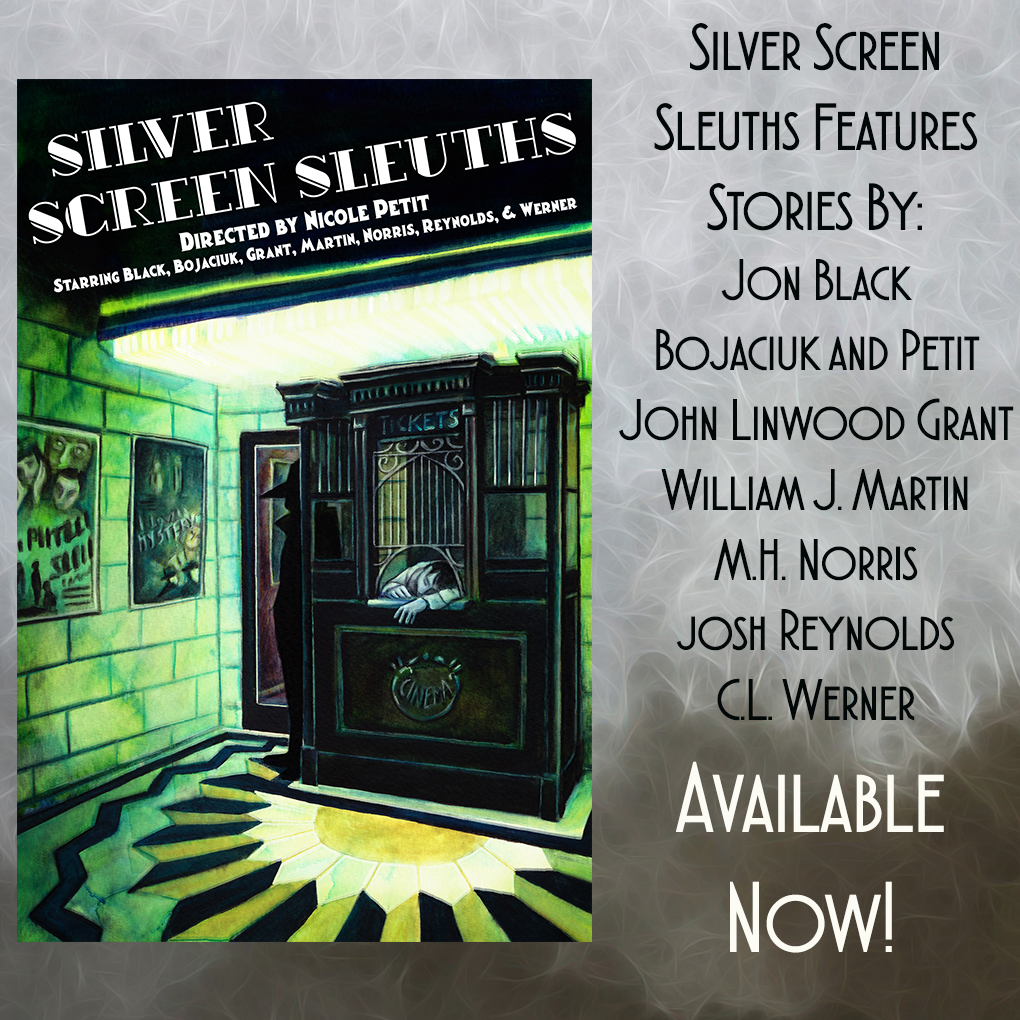