Two days ’til Christmas and we’re back! We’d like to usher you to the music scene of the 1950s, when rock was born and lighting up the charts. Maxwell Price takes us behind the scenes, to the horrors we might want to forget, in The Rockabilly Singer. 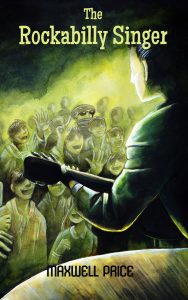 Cecil Jones is an aging boogie-woogie piano player scrounging for gigs in the mid-1950s. So when one of his old bandmates calls with an opportunity to make some money backing one of those hot new rockabilly singers, he catches the first train to Memphis.

Cecil hasn’t been back to the south in years, but he soon reconnects with his old comrades. There’s Big Jim, a towering wild man who thumps a killer upright bass, and Junior White, a cranky guitarist who tolerates playing rock-and-roll for an easy paycheck. With help from a teenaged drummer, they form a lean, mean rock-and-roll band behind Bucky Bennett, an odd-looking hillbilly who just might be the next Elvis or Jerry Lee.

Bucky has talent like you’ve never seen. Not for singing or playing, mind you, but for holding an audience at rapt attention. It’s uncanny. Those kids dancing…why, they’re almost in a trance, or something like it.

Not all rockabillies get to the big time without hitting a few bumps in the road, though. Like having to cover for Big Jim, whose outsized appetites might throw his bandmates’ fortunes back into the gutter. Like dealing with all of those morbid dreams, snatched out of restless nights, saying how the good times never last…

It’s the past that does the most damage, however. Especially a past filled with missing patches and dark secrets. That kind of past haunts musicians, but Bucky’s is darker than most. Bad record contracts were just the beginning.

Now that he’s going places, something has followed him out of the past, and it’s closing in on Bucky and his band.

We asked Maxwell Price some questions about The Rockabilly Singer

Give our readers an idea of what to expect!

The Rockabilly Singer is a short novel, set in the 1950s, about an aging piano player named Cecil Jones. Thanks to some old bandmates of his, Cecil ends up with a plum gig backing a young rockabilly singer named Bucky Bennett. Bucky may not have movie-star looks or the greatest voice, but he can hold an audience in the palm of his hand like nobody else. After years of scraping by, it looks like this will be the gig that Cecil can ride all the way to the bank, but strange and unsettling things start happening, and before long it appears that Bucky’s mysterious past is catching up to him. I would say The Rockabilly Singer is a Southern Gothic tale with its hair slicked back, cruising and tapping its two-tones shoes right along – until the really weird stuff starts going down.

What makes the 1950s music scene so interesting?

To me it’s an interesting time in general. It’s starting to get so far into the past now that a lot of what we tell ourselves about the 1950s could more properly be thought of as myths and legends, which may or may not have some truth to them. It was definitely an era of of social upheaval and paranoia, and it was also a time when you could hustle your way into the record business without having to mount a huge, multimillion dollar PR campaign.

At the same time, it meant that the full force of this unprecedented mass media fame was being unleashed on a lot of fragile and unprepared psyches. Many of the early rock-and-roll stars died young, or ended up disgraced, in jail, or just plain ripped off. We have this story of rock-and-roll being a liberating force, something that kickstarted the counter culture and helped the civil rights movement along. That’s a nice story to tell ourselves, but I think that the guys that made this music, for the most part, they didn’t get that kind of liberation. Come to think of it, who did? If anything, the things we may believe about the past (and which we believe about the 1950s in particular) are the very things currently holding the present hostage.

So that’s where the appeal is, as a writer. I wanted to do part of the story as a fairly realistic take on an often-mythologized part of American culture, but then bring in the supernatural stuff to connect things back to a set of much, much older myths and legends.

What should our readers listen to, to get in the mood while they read?

If you want to listen to spooky rockabilly/rock and roll music, there are many supernatural-themed novelties, like Jackie Morningstar’s “Rocking in the Graveyard,” Ronnie Dawson’s “Rocking Bones,” and Billy Lee Riley’s “Flyin’ Saucers Rock and Roll.” I would suggest Gene Vincent’s “Race With the Devil” as the best of these, for no other reason than Gene and the band play it straight, utterly convincing when they claim that Satan is on their tail. Similarly, Chuck Berry’s demonic “Downbound Train” is one of his best story-songs, and the band’s steam-engine chug brings the lyrics to life. Bill Haley’s version of “Thirteen Women” is also great; the record producer had Haley modify the lyrics to a typically amorous R-n-B tune to specify that the only reason so many women are after poor Bill is that all the other men were wiped out by the hydrogen bomb. For something quieter, the Everly Brothers singing on a death ballad like “Barbara Allen” is so stark and pure it will put a chill down your spine, and Elvis’ Sun Records arrangement of the standard “Blue Moon” is drowned in so much fluttery echo that it sounds unearthly.

In fact, much of Sun Records’ output has an eerie, evocative quality. Besides the big guys like Elvis, Carl Perkins, and Jerry Lee, try some of the more obscure rockabilly singers like Harold Dorman or Ray Harris. These are some of the guys I had in mind when writing about Bucky Bennett.

If you get distracted by lyrics, then try Link Wray, who recorded a series of menacing guitar instrumentals all throughout the 50s. His first big hit “Rumble” got banned from radio for promoting juvenile delinquency, a neat trick for a tune without any words and precious little in the way of a melody. Perfect (bad)mood music for a strange tale. Ditto for the song “Stalkin” by Duane Eddy and the Viscounts version of “Harlem Nocturne.” When things get wild, crank up anything you can find by Red Prysock, like “Hand Clapping,” where Red’s tenor saxophone sounds like it’s about to melt down by the ending.

But if you want to really get into the world of the characters from The Rockabilly Singer, I would suggest looking a little further back into the music that begat rock-and-roll: Jump blues, honky-tonk country, western swing, and early rhythm and blues. Get to know Wynonie Harris, Joe Turner, Amos Milburn, Ruth Brown, Big Maybelle, and Little Willie John. All their stuff rocks. Sun Records also recorded lots of great black singers before they became “the rockabilly label,” and the early songs by Howling’ Wolf, Bobby “Blue” Bland, and Jackie Brenston and His Delta Cats are incredibly powerful.

Finally, listen to Moon Mullican if you want to get an idea of what Cecil’s piano playing would’ve sounded like. Moon was a hillbilly that tore up the keys on all kinds of music, from blues to cajun, but a song like “I Done It” is rock-and-roll all the way, and was released the very month in 1953 when Elvis was just getting up the nerve to go into the studio for the first time.

That ending! Without spoilers, tell us where that came from!

Most of the Rockabilly Singer is a slow build, something that I wanted to do after reading turn-of-the-century weird fiction like Arthur Machen’s “The White People” and Algernon Blackwood’s “The Willows,” where unspeakable horrors are hinted at but never seen outright. T.E.D. Klein structured his stories in Dark Gods the same way, in a more modern setting.

(That said, if you look at Machen’s “The Great God Pan” or Klein’s “Children of the Kingdom,” some nasty stuff goes down. But you only get glimpses, and the narrators are spared the worst of it.)

If you look throughout The Rockabilly Singer, you can spot little shout-outs to some of these stories as things keep getting weirder. I wanted to cop that sense of loose, seemingly unconnected details – footprints in the snow, odd coincidences, unlikely song lyrics – coming together and creating a sense of dread. That’s what Klein does especially well: building the logic behind the creepy stuff, even if it’s a hazy sort of dream-logic.

But I’ve also read a lot of Joe R. Lansdale and Stephen King, so at the end I said screw it, lets have all hell break loose. Telling a scary story can be like southern cooking; sometimes you need to bust out the deep frier and give the people what they want. So in that very rock-and-roll spirit, I went for broke with the ending. If this book was made into a movie, I can proudly say that the last fifteen minutes or so would blow the budget to the moon and back, and probably require Rob Bottin to come out of retirement.

WE WANT TO THANK Maxwell Price FOR ANSWERING OUR QUESTIONS.

The Rockabilly Singer is available from both Amazon and from 18thWall Productions.

TUNE IN TOMORROW TO SEE OUR final BOOK OF CHRISTMAS!