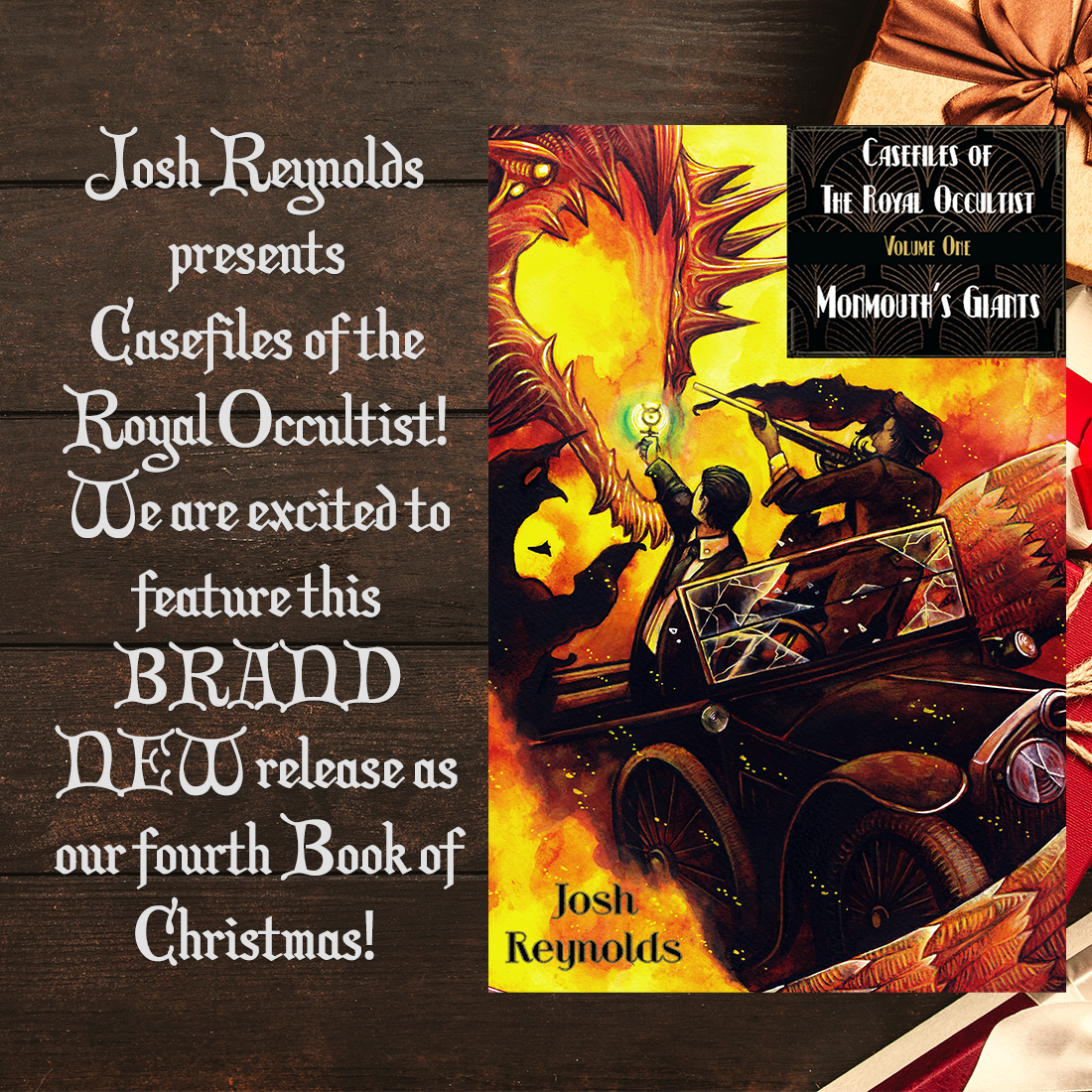 9 days ’til Christmas and we’re back! Now that we’re hitting the single digits, it’s time to get serious. Today we are thrilled to present our first of two new releases, Josh Reynolds Casefiles of the Royal Occultist!

We are proud to feature as our fourth book of christmas the brand new casefiles of the Royal occultist by josh reynolds. 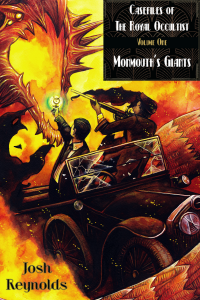 Jazz Age Britain is rife with the impossible.

Only the Royal Occultist can set these right.

Charles St. Cyprian and his assistant, Ebe Gallowglass, defend the British Empire against sinister secret societies, eldritch occurrences, and foul creatures of myth and legend. If there are satyrs running amok in Somerset, or werewolves prowling Wolverhampton, the daring due will be there to see them off.

Casefiles of the Royal Occultist: Monmouth’s Giants is the first of several volumes collecting all of Josh Reynolds’ Royal Occultist stories, including an all-new, never before published novelette, “Fane of the Black Queen.”

We asked Josh Reynolds some questions about this new release

Tell us a bit about what inspired this series?

I have long had an abiding love for the occult detective genre. So, when an editor came to me looking for a series character a few years ago I decided to take the opportunity to try my handat creating my own eldritch investigator. I wanted to avoid the tropes that had come to be most associated with the genre, and decided to avoid mean streets and hardboiled private investigators. Instead, I set my stories in the England of Wodehouse and Waugh, with a side of John Buchan, and a pair of adventurers who took more than a dash of inspiration from John Steed and Emma Peel.

You created a version of Britain where the magical or horrifying is only just a half step away (or below our feet). What makes this so engaging?

It’s a nation steeped in shadow. I’ve always been fascinated by the myths and legends of Britain, from the pseudo-histories of Geoffrey of Monmouth to the urban folklore detailed by Peter Ackroyd. There’s a wealth of stories waiting to be told, and more material than one writer could use in a lifetime.

For readers who may not have discovered the Royal Occultist before this collection, what are some things they should know going in?

Well, first and foremost is that the stories are intended as pulp entertainment. Whether I succeeded in that is up to the reader, obviously. There’s an emphasis on banter and excitement, rather than chills, and they wear their influences on their sleeve. I would also recommend taking a break between stories – they were meant to be stand-alone, so there’s some repetition when it comes to descriptions.

Can you tell us about some of the fan favourite characters and stories that are in this collection?

Three characters spring to mind. The first is the arcane bumbler, Philip Wendy-Smyth.

Wendy-Smyth has appeared in a number of stories, always attempting to make a name for

himself as a gentleman occultist, but doomed to be remembered as the man who let a clowder

of spectral cats loose in the club that one time. He’s comic relief at its finest, and can always be counted on to get St. Cyprian and Gallowglass into trouble.

The second is the unflappable night manager of the London Tunnel Authority, Ian Stanhook.

Stanhook and his men are the thin line between London and the terrors that dwell beneath its feet. Unlike Wendy-Smyth, whenever Stanhook appears, things are bound to be serious. As such, he’s become a favourite of readers who like a bit more grit in their stories.

The third character is also central to this collection’s unifying story arc – that of the Black Pharaoh, Nephren-Ka. Devilishly cunning and monstrously hard to kill, the bestial mummy is a reoccurring foe of the Royal Occultist. He’s appeared in three stories to date – all of which are included in this collection – and while his tale ends fairly conclusively in this volume, it’s hard to keep a good mummy down.

There’s a brand new story for fans of the Royal Occultist. What can you tell us about that?

“Fane of the Black Queen” is the first solo outing for Ebe Gallowglass, St. Cyprian’s plucky – if somewhat murderous – assistant. It’s also the final story in the Nephren-Ka cycle.

Without saying too much, things get very bloody, very quickly. There are also a few hints as to Gallowglass’ origins – something only mentioned in the vaguest terms thus far.

WE WANT TO THANK Josh Reynolds FOR ANSWERING OUR QUESTIONS.

Casefiles of the royal occultist IS AVAILABLE Now

TUNE IN TOMORROW TO SEE WHAT OUR Fifth BOOK OF CHRISTMAS IS!