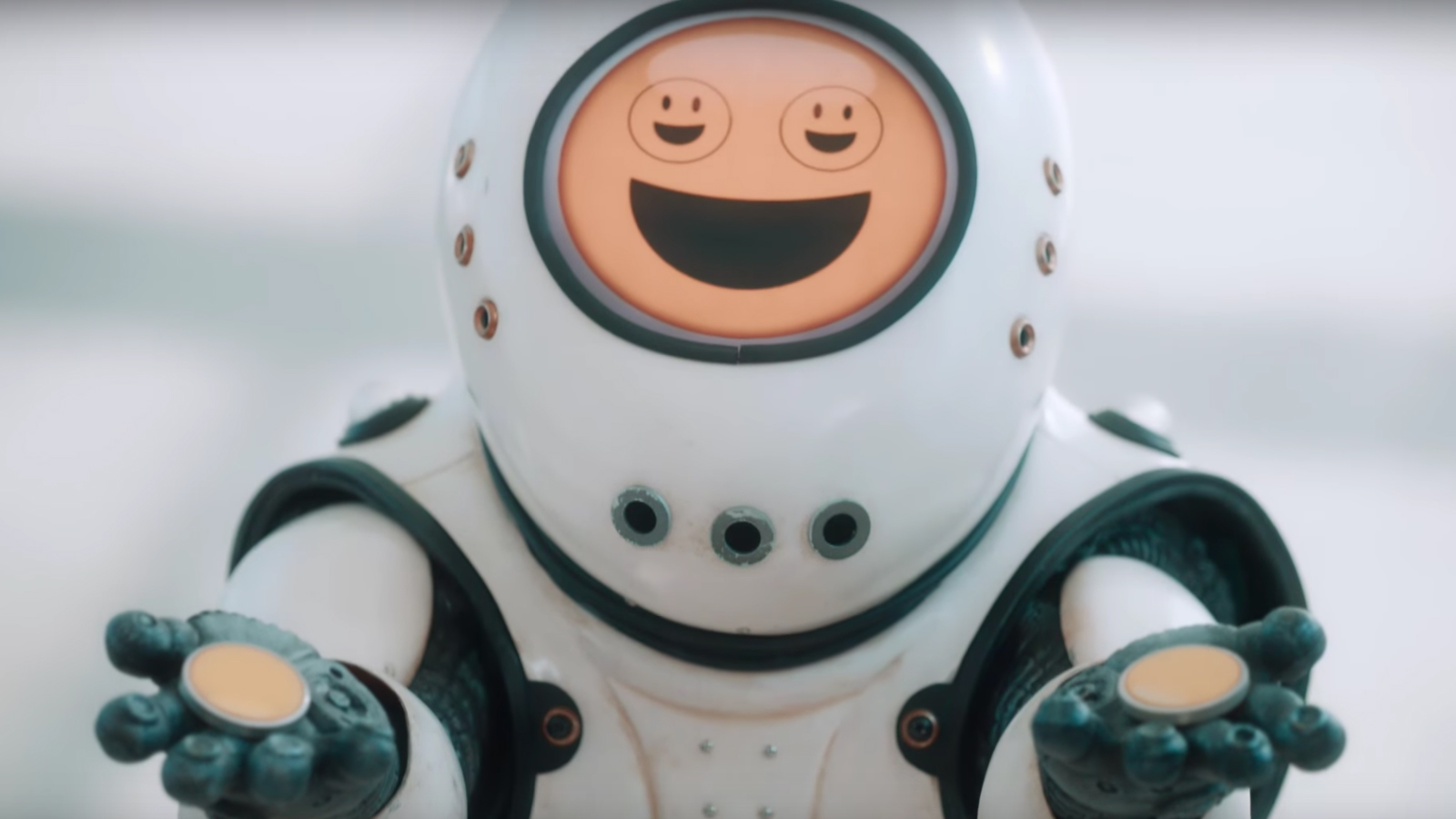 If Walls Could Talk: Writing at a Pace that Makes your Readers “Smile” (Doctor Who)

We wanted to start the fifth year of M.H.’s column with a look back at her most popular and well-received article, which was shared widely and received thousands of hits. It’s an excellent examination of pacing, what can go wrong, and how to make pacing work for you.

Doctor Who is now two episodes into its new series and, honestly, in terms of quality they were vastly different. In this column, I try to share with you lessons I learned in writing; and after watching “Smile” on Saturday night, I saw something and wanted to share it with you. 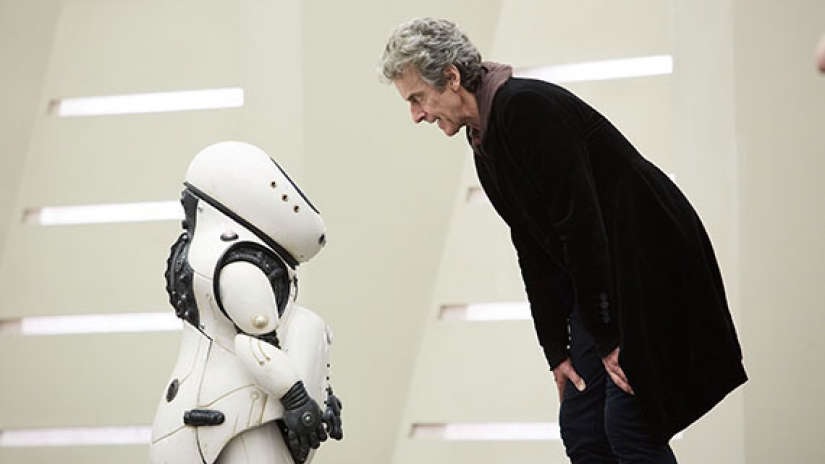 Before I begin, I wanted to take a second to note that I do not want to lay blame completely this episode’s author, Frank Cottrell Boyce. That may seem odd, after all, he was the one to write it. But, in quite a few interviews, Steven Moffat has admitted that he often rewrites episodes from the ground up. That in mind, there’s no telling whose feet to lay the blame at (and I’m not bashing Moffat with this article, so much as critiquing; I’m still keeping an open mind about Series 10).

I found myself watching–but not loving it. It wasn’t until the very end I put my finger on what was wrong.

I’ll come back to it in a second.

And stories move at their own pace.

This is a hard one to really show and talk about, in abstract. But then “Smile” seemed to open the door. Because the majority of the problems with the episode aren’t conceptual, but mechanical.

“Smile” fell flat due to a pacing issue.

Let’s break down the average 1-hour television drama and let me talk about some of my observations.

Taking out the commercials, there is roughly 42-44 minutes of actual programming in an hour timeslot. Traditionally, and I mentioned this in a blog post ages ago, crime shows–like Psych on USA Network–finally solve the case and resolve the crime in the last 7 minutes of the show. That’s the last sixth of a program, dedicated entirely (in a well-paced program) to climax, resolution, and tying everything up in a pretty bow.

That’s not to say that the previous thirty-something minutes are purely set up. There’s sometimes a few false starts and leads, the A- and B-story weave in and out of each other. Up to that point you know a good chunk, if not all, of the who, what, where, when, why, and how–and it just ties itself into a bow. This is your rising action.

What I’m saying here is they don’t solve the entire mystery in the last 7 minutes. They get bits and pieces that all come together there. 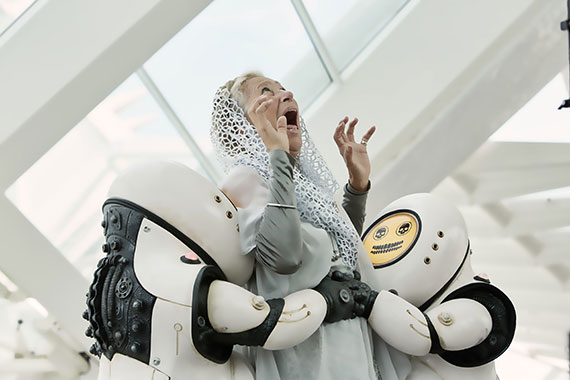 “Smile” had a two-part problem.

One, it had too many threads fighting for dominance and demanding to be completed.

Two, they spent too much time setting up the concept only to rush (and in my opinion ruin) that setup with a new rising action, climax, and conclusion (with new information) all in the final few minutes.

“Smile” kicks off with the Doctor taking Bill to some point in the future of mankind. They’re on a planet half the universe away, where, according to the Doctor, a ship full of humans are on the way to colonize it.

It turns out, the emoji bots were made to make humans happy and don’t know how to deal with the more negative emotions humans face. Unable to deal with it, the kill the unhappy people to try and keep other people happy. And this city, this supposed future Eden for the human race, is made out of tiny little robots that can leap out of the walls and kill people at a moment’s notice. 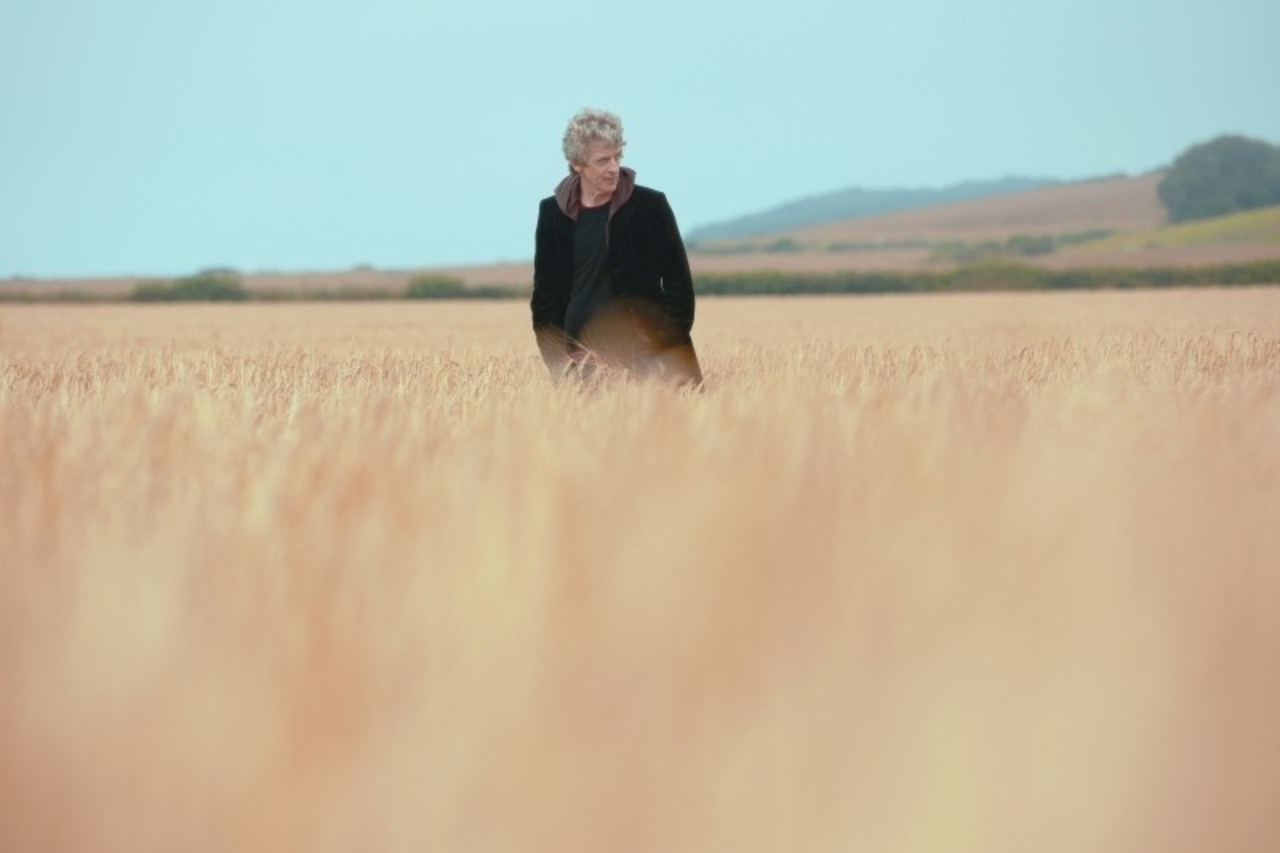 The Doctor decides to take the very Ace-like solution and blow the city up, letting the humans start over when they arrive. They find the spaceship the skeleton crew arrived on, and he heads to the engine to sabotage it into a makeshift bomb. Meanwhile, Bill finds a body of an elderly human woman. A book with flashing images is mounted on her slab.

It takes us about a half hour to get to this point.

Using the above time table, we have about 10 minutes of programming left.

All of a sudden, a little boy shows up, we discover that the humans aren’t on the way–they’re on the ship a la Ark in Space, the robots are apparently a sentient species (apropos of nothing), and that the Doctor doesn’t know what to do with the robots.

Honestly, “Smile” felt like it was a two-part episode that was forced to be one – and most of the second part was dropped and crammed into less than 10 minutes of air-time.

If I was editing this script, I would have cut here and waited til next week to finish this story.

Upon discovering that there are humans on-board the ship, upset that their people have been killed by the robots, they gather their weapons and chaos ensues.

And it doesn’t make sense.

Do not throw information out of left field in the middle of your climax, especially without having anything in the story to support it. “Smile” did this and it leaves your reader (or in this case viewer) feeling a bit disjointed. To pull this off, you need to set it up like a mystery, with elements that seem out of place until the reveal makes these elements make sense.

Even if they don’t see it coming, your audience must have a fair chance to. They appreciate it. They feel as though you’re honoring their intelligence, and it adds depth for people who read or watch your work a second time.

Don’t try and justify this by dumping the information in their laps. Leave them a visual clue somewhere, put it in dialogue, make every tool you have work to your favor so when they are done, your audience sits back, looks at your work, and sees how you utilized everything to tell your story.

Show your readers how you’ve come to your climax, and make them see that that’s where you’ve been going to the whole time.

Info dumps are not only telling, but are a sign that there’s a pacing issue somewhere along the line.

Maybe that information can be hidden somewhere you main character almost overlooks at the beginning of the book. Maybe it’s a passing sentence on page 15, and is actually the key to the whole story.

Does it come up again? Or does it slap them in the face as you go into the climax and they realize that maybe they should have paid more attention?

You don’t want to hold your reader’s hands. You want them to think. But you have to give them the tools they need to do it.

“Smile” is Bill’s first real adventure. It’s a proper adventure where she’s been invited onto the TARDIS, and not shoved in to hide from something else. To that degree, the Doctor needs to hold her hand a bit.

Then again, he is the Doctor. He has been known to be unaware his companions are actually along for the adventure with him ( cough cough The Time Warrior cough cough). 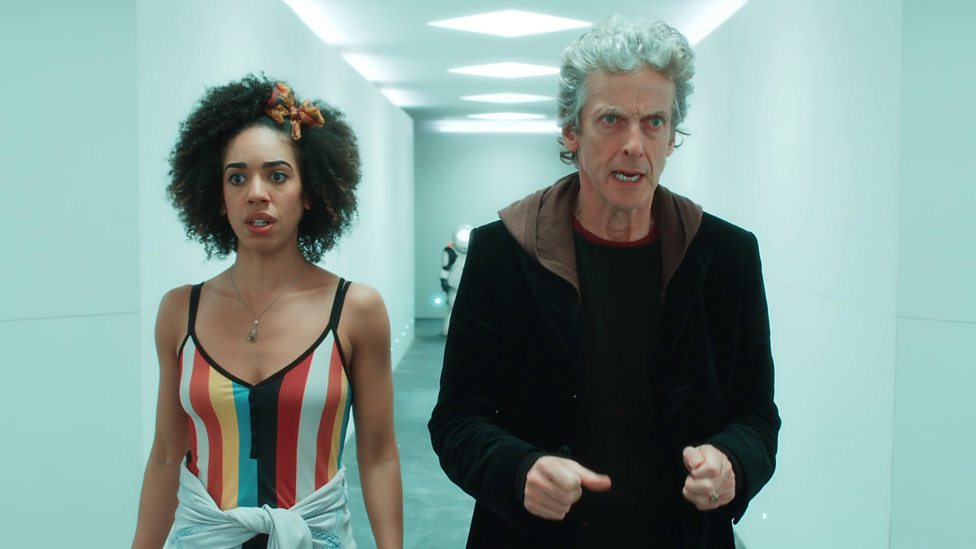 Out of nowhere, as the humans shoot emoji bots, the Doctor resets the robots, treats them as if they are a new sentient species (again, apropos of nothing), and gives them jurisdiction of the planet–making the humans the new species and tells them to all get along because, after all, the robots know all about the city and they don’t.

There are multiple reasons this does not work.

One: The Doctor is  is always going out of his way to help victims, and all of a sudden he’s defending robots that spent the episode trying to kill these people?

It doesn’t fit the Doctor’s character thus causing a disconnect between writer and viewer. This could be forgivable, but see point Three.

Two: There is no indication whatsoever that the robots are sentient before the Doctor decides they are in the last couple minutes of the episode. It is an infodumped climax item that doesn’t fit. There is no in-story evidence they’re sentient. They exclusively act like ordinary, programmed robots

Three: It morally compromises The Doctor, without ramifications. So, he apparently mind-wiped an entire sentient species? When the previous episode, “The Pilot,” makes mind-wiping out to be an extreme violation of a person, and absolutely, always, morally wrong?

Not only that, but now there’s an entire chunk of the human population who are now forced to live with robots that the Doctor claims are sentient. They are forced to live with people who killed their friends and families, with no sense of justice? If the robots are sentient, it makes matters worse. Instead of simply suffering a malfunction or oversight in their programming, the robots are living, thinking, beings who willfully chose murder.

As a crime writer who spends some time in the heads of people who have dedicated their lives to bringing justice to families, I find that horribly out of place for anyone, especially the Doctor.

This could work if there was a ramification, an acknowledgement, and exploration of the fact the Doctor failed. There isn’t one. This is treated like a triumph, when even the last episode tells us otherwise.

Four: the audience does not have the tools to reach or understand this conclusion in the context of the previous 30+ minutes. It’s a narrative and pacing break. 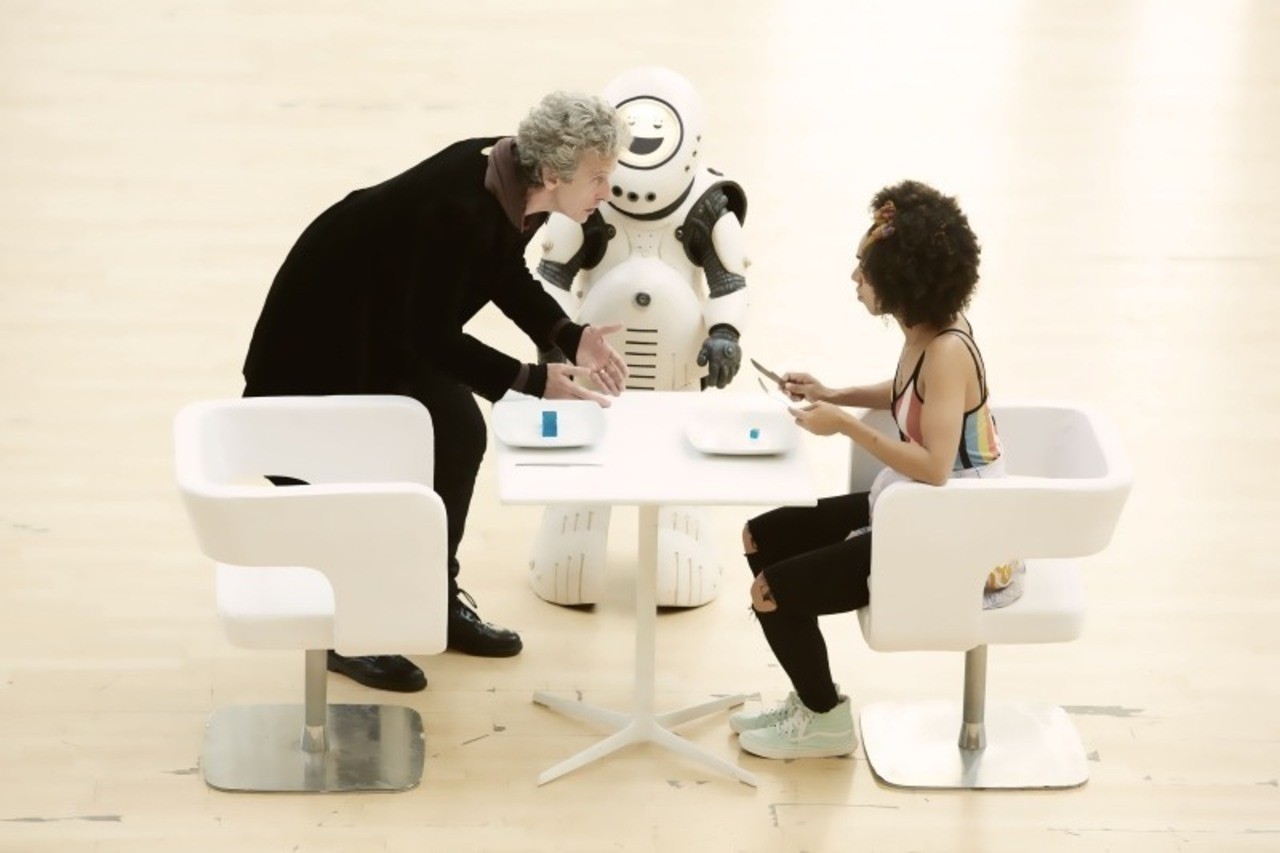 So what does this teach us?

After all, one thing I’ve said multiple times is that I like to study television shows, movies, and books to see if there’s something I can learn.

Set-up is important. Every good story needs it. But you can’t set-up at the expense of your climax and conclusion. These need to be satisfying for your readers, make the story tie itself together in a pretty little bow, and stay true to your characters.

Another thing we learn from “Smile” is that a good story can be ruined by having too many things going on. B-stories are honestly something I struggle with as a writer, “Midnight” being one of the first times I really attempted to weave one into a story.

For once, “Smile” didn’t annoy me by being a less than stellar episode of the show. Because this time, I was able to look at it and see where it went wrong and apply it to my writing.