Articles, If Walls Could Talk

Once upon a time, there was a young writer in the infancy of her career. She dreamed of the day she’d have a book published. For years, she thought she would do it with a Young Adult novel.

Then, in late 2013, a series of events burned out this young writer, pushing her to her breaking point. She went on an emotional writer’s strike for about six weeks (during that time only writing about 300 words – the lowest her count has been before or since).

In January of 2014, she decided that it was time to get back on the horse and write again. So, she went to the open call page of a publishing house she’d submitted to before. Did they have a call that spoke to her? They did!

She found one about a family of cops, and asked about writing a present day novel featuring the third generation of cops in a town with a strong police force. In her naivety, she thought she could handle it. After all, she’d read tons of mysteries growing up. And, she’d recently gotten into USA Network’s Psych.

But when she prepared her pitch, layering in the odds and ends that make up a mystery, she realized that she was going for a darker, more serious tone than her beloved show and needed to figure out how to handle it.

Perhaps she’d heard of Criminal Minds from ION while watching Psych marathons? Or maybe she’d seen it somewhere else? But, the show came to mind and she quickly went and found the first season and sat down and began to watch.

Over the next three months, she would catch up with the show. It helped her learn how to handle a dark mystery, characters, and serial killers.

To this day, that writer believes that Criminal Minds has helped to make her the writer she is today.

And today, that writer has to say goodbye. I have to say goodbye. Tonight, Criminal Minds airs for the last time on TV and honestly, I’ve spent the last few days getting rather emotional over it. I’ve teared up a few times already writing this post.

Let me say it again. Criminal Minds made me the mystery writer I am today. In a time where I was just inching into the genre and felt completely lost, the BAU provided me insight and support. It helped me as I found my voice. 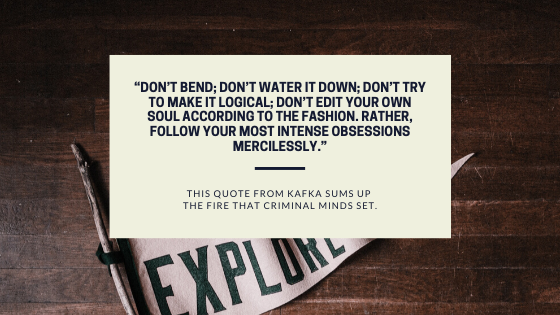 What are some specific things that Criminal Minds taught me?

1) It Taught Me About Murder Investigations

Back in the early days of mystery writing, I didn’t know much about killers and how to go about creating an investigation. I didn’t understand how they worked, or the subtle nuances that you needed on both ends to make a convincing story.

I’d started to read profiles of various killers but Criminal Minds gave me a way to see it in play. And the perk of watching it done this way was that every 45ish minutes, I saw them do it again and again and watched as different variables changed and how they handled them.

In season 2 episode 21, “Open Season,” JJ walks the local Sheriff through his first notification. In that episode, she gives him step by step instructions on how to handle telling a father that his son is dead. In Notches, there’s a scene where my detective had to do the same thing. Being a seasoned homicide Detective, she would have had to do this several times and I needed to figure out how to approach that scene and be comfortable doing so.

When she started to spell it out for the guy, I took notes. I played the scene a couple of times until I thought I had everything JJ told him.

And then I turned and used those notes to write the scene.

Deidre, Adelaide, and (especially) Rosella have used geoprofiling. They’ve built psychological profiles of the people they’re chasing. I learned all of this from Criminal Minds.

2) It Taught me about Motive

For me, one of the hardest parts of creating a mystery is coming up with motive. Why would someone do something like this? Especially once we wander away from crimes of passion, and into more horrible crimes.

Criminal Minds teaches us, however, that the motive doesn’t have to make complete sense to us. It only has to make sense to the UnSub.

But one of the biggest focuses of Criminal Minds is the motive. If they can figure out why someone did something, it might help them figure out the who.

Fun fact that I’m not sure I’ve shared before. In Midnight, I never share why the killer did it. I had a motive in my head that I came up with at some point in the process but I never share it. I think the only two people who know are James and me.  Not even Rosella knows.

And no, I’m not telling. But you can figure it out.

The fact that I didn’t give Rosella the closure of knowing why that happened, why those events were set in motion, is something that haunts her. It’s a character building moment.  Closure in a mystery comes in two parts. The first is knowing the “Who.” But the most important is knowing the “Why.”

We spend so much time trying to make sense of why things happen. There has to be a reason.

But what if you don’t know? In real life, there are times we never get the answers. We don’t get to find out what was going on in the killer’s head. I think by doing that in Midnight and keeping Rosella in the dark, it made it that much more realistic.

And not having the why in her first big case is something that might haunt Rosella for the rest of her life.

3) It Taught Me to Set the Bar for My Mysteries

I don’t settle for average murders when I begin to craft a mystery. Perhaps that’s part of the reason that the idea of combining myths and mysteries appeals to me so much. Perhaps some would view it as overly complicated, but I like mysteries with layers that take time to unravel.

And it’s something I learned from Criminal Minds. Things aren’t usually simple, even if they appear that way at first. After over 300 episodes, Criminal Minds has tried to raise the bar and come up with new cases. Sure, there was the Scratch storyline that stretched on a bit too long – but otherwise they’ve kept things different to keep people coming back again and again. Yes, there’s been cases that have spanned multiple episodes, one even acted as a B story for most of a season. But for the most part, these have been unique cases with new killers and yet they find ways to keep things interesting.

I hope to be able to say that about my writing someday. 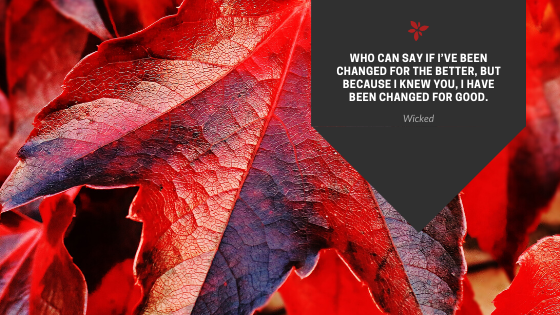 Over the last 15 years, Criminal Minds has had its ups and downs. Honestly, when the announcement came that it was going to end this year, I wasn’t surprised. At least the show has decided that it wants to go out on its own terms.

It’s a bittersweet day for me, sitting here knowing it’s the end of something  that means a lot to me. I would not be the mystery writer I am without Criminal Minds and I will forever be grateful for the lessons this show taught me. The three I listed here feel like they don’t scratch the surface.

Thank you Garcia for always being my spirit animal and lighting up every scene you stepped in to. Thank you Dr. Reid for finally making me feel less self-conscious about how fast I read. Thank you to all the agents who came and went, each bringing their own lessons and touching my writing and my life in their own, unique ways.