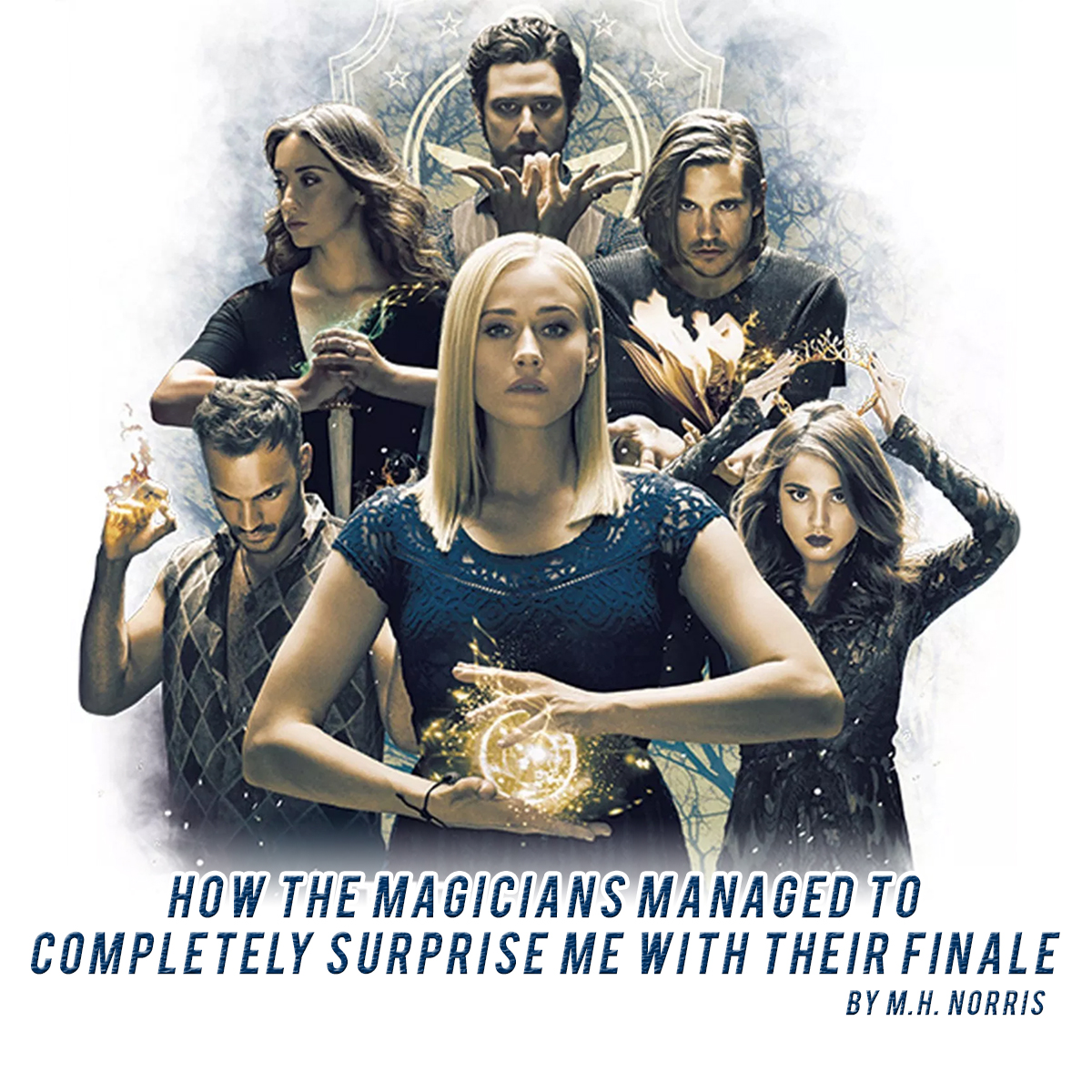 If Walls Could Talk: How The Magicians Managed To Completely Surprise Me With Their Finale

The Magicians wrapped their fourth season with a finale that managed to surprise me – and left me feeling better about a finale than I have in ages.

To make you understand the massive kudos this deserves, let me tell you my opinion of The Magicians.

I only started to watch this show after it was announced that Felicia Day was going to be guest star in season 3. With Day being one of my personal heroes, I was excited to see her on a show again. So I dove in a few weeks before the new season began.

I did keep watching because I was curious what they were doing, a decision I didn’t regret when Felicia Day returned for another appearance the following season

But, this is not a show I watch to study to see how they do things. I do not watch this show because it’s the highest quality thing on television. Half the time, I put it on as white noise while I do something else. I passively watch it.

The finale aired on a Wednesday and I put it on that Thursday while I worked. About 35 minutes in, the work was abandoned and The Magicians had my full and undivided attention.

Before I go any further, I want to put a MASSIVE SPOILER WARNING for the season four finale of  The Magicians. Actually, to an extent, a spoiler warning to the whole show. So, if it’s on your list to watch, or you’re behind and plan to catch up, walk away now and come back when you have.

The Magicians is based off a book series by Lev Grossman. It features Quinten Coldwater and a group of college-aged people as they discover that not only is magic real, but it’s darker and more dangerous than they thought. Over the course of four seasons, they’ve found most of the missing class of Brakebills, recovered magic, stopped god-like beings, and learned a lot about themselves and the world around them.

At the end of season three, an unnamed being possesses Elliot after the gang tried to restore magic. This season has been about stopping the being and saving Elliot.

Up until the point it surprised me, the finale felt rushed. It’s a normal problem. Having seen the whole thing, however, I understand why they rushed. Their last act needed the room to breathe. And while I think that final act is some of the best television I’ve watched in a long time, I wish that they’d shoved some of that plot into other episodes to negate that rushed feeling.

They were in the mirror world, throwing jars which contained the possessing being into a crease between the universe and…something else. They weren’t exactly clear on that. Moral of the story, whatever went in would never come out.

“They,” in this case, are Quinton, Alice, an alternate version of Penny, and Everett. Everett was the head librarian and had been introduced late in the season as an antagonist who was trying to bestow godhood on himself.

To stop Everett from achieving his goal, Quinton does magic in the Mirror World – something you cannot do because magic tends to go a bit haywire in this dimension. This causes a chain of events that kills both Everett and Quinton.

Yes, you heard me right.

The Magicians killed off their main character.

Coming back into the final act of the season, I was shellshocked to say the least.

How were they going to deal with this?

How do you come back from writing off your main character?

That answer won’t come, not until the show comes back (it got a surprise renewal ahead of the season four premiere). And they’ve official got my attention as to how they’re going to deal with this.

But none of this is what blew me away. Shock deaths aren’t new.

What blew me away was how they handled his death. He shows up in the Underworld where he meets the Penny of his timeline who died a season ago. It’s Penny’s job to help him to prepare to pass on.

Quentin mentions how before he’s been in and out of hospitals due to suicidal thoughts. That he’s made attempts attempts, and there’s been meds, therapy. When he found Brakebills, and thought that was behind him.

But here, sitting on the brink of the afterlife, he asks a question.

“Did I do something brave to save my friends or did I finally find a way to kill myself?”

I stopped cold when I heard that. Because, I would have never have looked at it that way.

And I’d kinda forgotten about that side of Quentin. But, in that moment, in one of the last moments we see this character, he’s still haunted by the demons of his past.

Penny makes a comment about needing the “deluxe package” and the two end up at Quentin’s “funeral” where the rest of the main cast is attempting to come to terms with what has happened.

And through a musical number, we have one of the most touching ways I’ve seen to say goodbye to a character.

Each person brought an item to the fire. For each item, there was a story about Quentin.  There was real, touching grief in that moment. And yes, it was done in a slightly unconventional way but that might be what made it so…for lack of a better term, right.

As to the answer to Quentin’s question? The answer was in the funeral. He changed their lives as much as they changed his. It wasn’t a suicide attempt. It was, in fact, a brave act of heroism that will allow his friend’s stories to continue.

To me, the cliffhanger didn’t matter. To me, they could have ended the show itself here and I would have been okay with it.

And that brings me to the first of two things you can learn from this finale.

1) The Cliffhanger Doesn’t Have to be Over-The-Top

It seems as if television has come to a point where it feels the need to outdo its previous finale, but to place that finale as one of the BIGGEST cliffhangers of any given year. People go bigger and bigger and that’s not necessarily a bad thing. But often…

An example is Criminal Minds season 12-13. The Scratch storyline was dragged out entirely too long. It almost started to feel like a CW show where they were creating drama for the sake of drama.

By the time we hit the over-the-top “we’ve finally got the killer where we want him – let’s go get him” charge at the end of the season 12 finale, I was, quite frankly, over it. The further cliffhanger on top of that, leaving the cast’s fate uncertain through a car crash, made matters worse.

But The Magicians did a quiet cliffhanger. It let Quentin’s death stand as the biggest blow and didn’t attempt to eclipse it with some shiny “here’s what we’re going to do next season” cliffhanger.

It understood that the story they were telling in that moment didn’t need it.

We mention it all the time, and The Magicians finale is an excellent example. Show, don’t tell needs to be your daily mantra.

Say it with me.

Funerals are scenarios that make it hard to escape telling. After all, people tend to tell stories about whoever the funeral is for. In books, movies, and television, that’s not different.

But here, they had a funeral without the speeches and instead each one had an item that told a bit of Quentin’s story. And we saw that story, that memory they attached to it, to Quentin.

It showed us so much about Quentin, and it touched me more than funeral scenes usually do. We weren’t told, we saw – and because of that, we felt.

I was surprised when this finale touched me as much as it did. It blew my mind how it was brave enough to make a tough decision like killing off its main character to advance its story. That’s something that television has been lacking (and yes, two years later I’m still upset that the CW didn’t kill a certain character in The Flash).

You’re risking a lot by making this choice. Taking out a main character impacts a show and often times I see that it takes several episodes for them to find their legs again. The Magicians tends to do 10 episode seasons which means they don’t have that kind of time (as opposed to CBS’ Bull, who, after removing a character, can find space in its 22 episode order to recover).

It’s got my attention because I’m curious to see if the risk pays off.

If you had told me a week ago that I would be sitting here writing an article about the season finale of The Magicians I would not have believed it. But, this was some of the best television I’ve seen in a long time.

It reminded me of why I want to work in television. It reminded me the joy of a good surprise, of pulling off a big reveal. I was jealous of the showrunners for pulling it off with no one being the wiser.

As we go into finale season, I wonder if anyone can top that.

To be honest, I’m not sure they will.