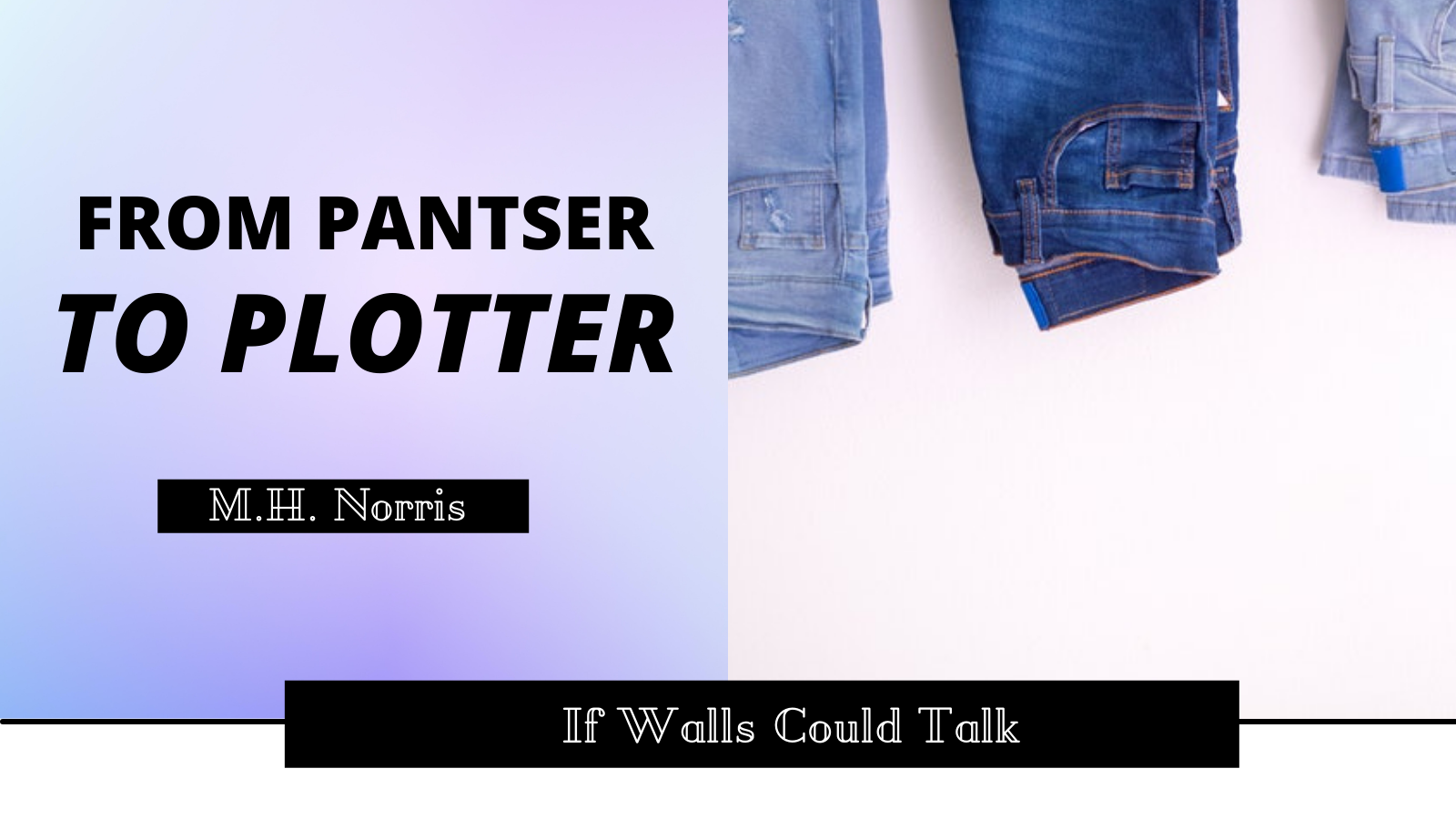 If Walls Could Talk: From Pantser to Plotter

For those of you who are unfamiliar with the terms I used in this week’s title, let me start off by explaining those.

Planners are exactly what it sounds like: someone who plans out their stories. Now, that can take many forms. Some writers have detailed outlines, while others are more vague. Some have detailed boards with locations and character bios – and research everything.

Pantsers get their names from the phrase “fly by the seat of their pants.” They are the writers who wing it. Who abhor outlines. Who embrace the challenge of the blank page and all of the unknowns that follow.

I first ran across these terms while doing NaNoWriMo. It’s where I see them used the most, but I’ve found them in books about writing, conferences, and just about everywhere writers get to talk about their approach to the craft.

There is nothing wrong with either style. In fact, over the years, I’ve changed. When I first started focusing on my writing – making that shift from a hobbyist to wanting to do this professionally – I was a Pantser. I HATED outlines because, to me, they squashed my creativity.

To younger me, there was something thrilling about writing a short story and not exactly knowing what was going to happen. I loved making it up as I went. I even did several NaNoWriMo attempts (I might have even won one) with this method.

I would sit down after work, after classes, whenever I had free time and I’d create. Armed with little more than a vague idea and what little writing talent I possessed, I cranked out hundreds of thousands of words.

So why did I change?

Why did I go over to the dark side and start planning?

It all started when I wrote Notches.

To me, the opportunity to write a full-length release was so exciting and I was so eager to do well, that I embraced planning.

And proceeded to spend an entire month planning the book. I took the synopsis I submitted and fleshed it out into an outline. From there, I took a second (more like a month) to do A LOT of research. I read multiple books, binged crime dramas so I had a baseline for the genre (hello, Criminal Minds), and looked up various casefiles from serial killer cases featuring similar (and a few different) demographics.

From there, I went and sat down and wrote the book. For the first time in my (admittedly short at that point) writing career, I had spent weeks in the beginning stages of a project.

I was surprised to find that it helped my creativity. By not focusing as much on where I went, I instead got to focus on the story itself. I got to invest that creativity elsewhere.

In the last few years, my tendency to plan has also helped me as I work to fight through brain fog. By going in with a plan, I took some of the pressure off.

Bonus tip in this article: when writing mysteries, go in with a plan (and, ideally, a detailed one). It is not fun to make it a good chunk of the way through a draft and realize you don’t actually know who did it.

There’s no right or wrong way to write. I want to be very clear that I’m not sitting here and telling you that you need to spend weeks on an outline before you even touch a project.

Nor am I saying that there’s anything wrong with that.

Have I mentioned how much I love the craft of writing? There isn’t one right way or wrong way to do it.

For me, I was a Pantser and now I’m a Planner. When I start plotting, it’s vague. I write a rough idea of how I’m getting form point A to B for every single scene.

Then I write a first draft. Which James often refers to as a glorified outline. Usually my first drafts come in severely under the word count. Sometimes they’re missing endings altogether. Endings are seriously hard.

When I was primarily a pantser, the appeal to it was that I was putting the pieces of a puzzle together. I wouldn’t have the full picture until I wrote the final words on the final page. The exploration, the journey, was in making my way there.

As I’ve gotten older, I’ve found that I prefer finding that mystery, that discovery, in the individual scenes. While I have the vaguest picture of what I’m doing, I now get that discovery multiple times throughout a project.

I was working on a scene recently that takes place in a theme park. There are a few factors that make this unique. It was a scene that I spent a couple of weeks on, though it would amount  to a few thousand words. While painting this picture, this scene has more layers than I ever have attempted before. When this project sees the light of day, see if you can catch some of them. I’m hoping I do the idea in my head justice.

I started with a lot of notes, some research. I consulted some experts. It was a ball and helped me fall in love again with research (and now I smell a future topic for here).

As I stated before, there is no right way or wrong way to write. If you are a Pantser, keep on pantsing it. It’s a perfectly valid way to do it and on shorter pieces, you’ll find I still do go that route.

With Planning, there is no right way to do it. Some people go overboard. Some do a little and it’s enough for them. Personally, I fall in the middle of the two.

For me, the decision to switch how I wrote has helped me grow as a writer. It’s part of the process of becoming a writer, finding what works for you.

There’s your challenge for this week. Take a look at your process and see how you feel about it.

Experimenting is half the fun.