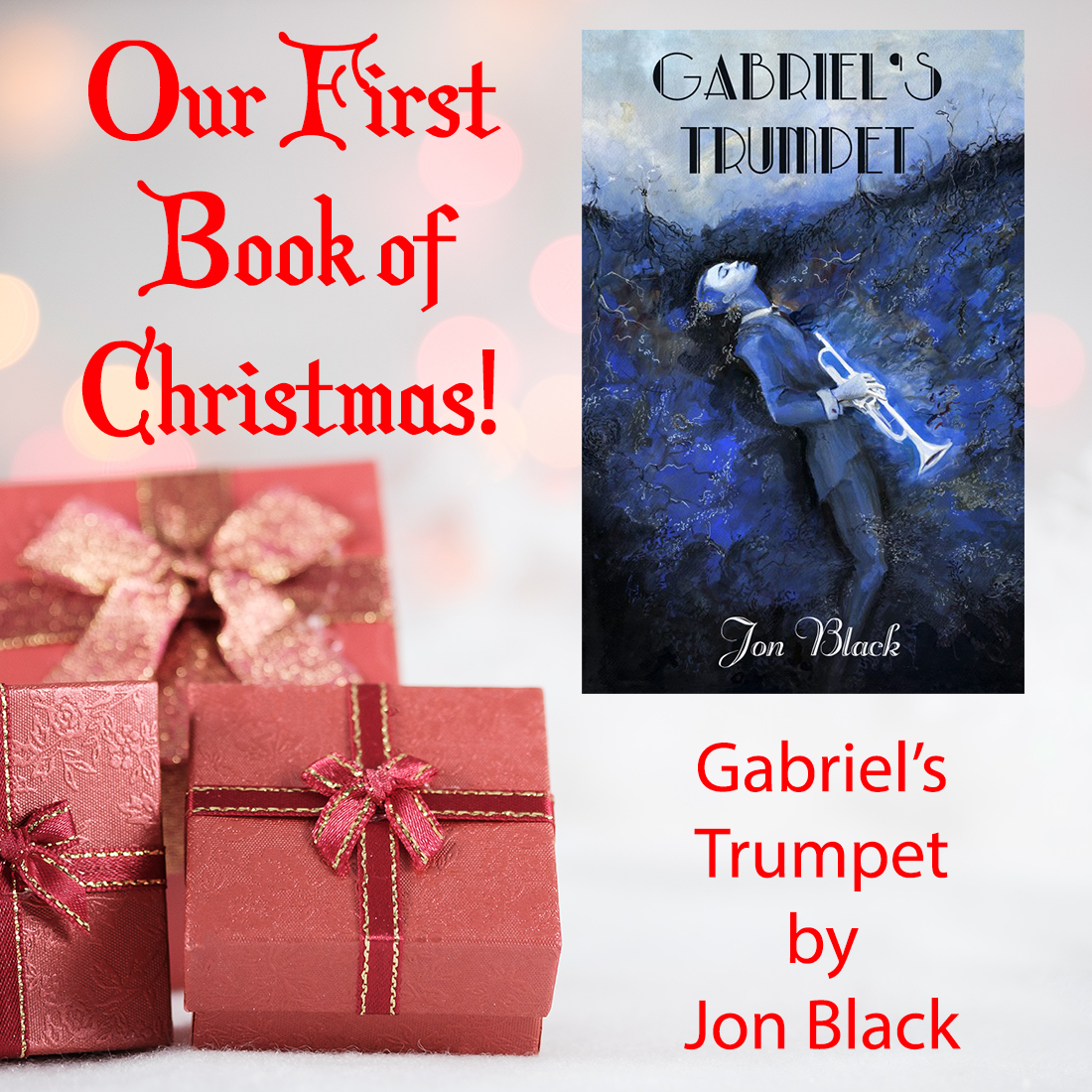 Gabriel’s Trumpet by Jon Black Kicks Off Our 12 Books of Christmas!

Hard to believe that we are 12 days away from Christmas! M.H. Norris here and I don’t know about you but this is one of my favorite times of year. Even as I sit down to write this post, I’ve got Christmas music playing from my speaker (in honor of Gabriel’s Trumpet being the subject of this post it is jazzy Christmas music). And for the first time ever, I’m almost done with my Christmas shopping (wrapping too).

When everyone here at 18thWall Productions came together wanting to create a promotion this holiday season, we threw around some ideas. We really hope you like what we came up with.

That being said, starting right now, we are launching a 12 Books of Christmas promotion. Every day, we’ll feature a book from our store. Each featured book will have a new article from the author (or curator for the anthologies in the lineup) with some new insights.

When we were putting this promotion together, we debated on which book to start with. After some discussion, we decided to kick it off with an author we feel so lucky to have writing for us. A little tease, this isn’t the only time you’ll see this author during this promotion. 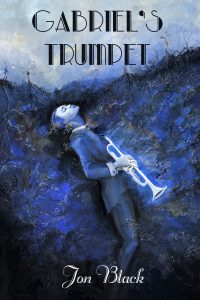 Every time I hear that we’re going to be releasing another Jon Black story, I am so excited. Black is a fantastic writer and his stories have had me hooked since the first day I read something by him. I’m excited to include him in this promotion and loved being able to chat with him more about it.

But first, what is Gabriel’s Trumpet? Check out the description below.

That’s the question confronting Dr. Marcus Roads, physician and investigator for the Boston Society for Psychical Research, in this Jazz Age supernatural mystery. Gabriel Gibbs, a jazz trumpet player, was murdered in New Orleans two years ago. Now, Gabriel is back … with a gleaming silver trumpet and preternatural musical talent.

Marcus’s superiors task him with a high-stakes investigation. Is it really Gabriel? Or is someone (or something) claiming to be him? From tracing the musician’s origins in the tragic Mississippi Delta community of Pilate’s Point, Marcus follows in Gabriel’s footsteps through New Orleans and into the mysterious deep bayous. Ending in Harlem at the height of its Renaissance, Marcus searches its streets for his ultimate goal: a face-to-face encounter with the trumpeter whose life threatens to consume his own.

The latest work by award-winning novelist and music historian Jon Black, Gabriel’s Trumpet simmers in the music and musical scene of the 1920s. Having walked in the same footsteps as his characters, Jon vividly brings to life the great locations of America’s Jazz Age, putting readers right in the action alongside Marcus as he struggles to answer two questions…

You can get Gabriel’s Trumpet as an ebook in our store.

We sat down with jon black to ask a few questions about this wonderful story.

With a passion for music, as well as a background in music journalism and music history, music finds its way into my stories even when I’m not trying. Few decades have been more musically fertile or pivotal than the 1920s. Though the origins of Jazz stretch back to the 19th century, the 1920s stands as the moment when the genre exploded into a national and international phenomenon. And, of course, America’s great jazz cities, places like New Orleans and New York City, are locations any author of historical fiction loves working with.

Take those two elements, jazz and spiritualism, shake well, and you get the story of Dr. Marcus Roads, paranormal investigator for the BPSR, tasked with chasing down jazz trumpeter Gabriel Gibbs, who, stories say, owes his sublime to talent to more than earthly means. And when the phenomena of music and spiritualism overlap, you get some of the era’s most notable locations and a cast of memorable historical figures, from Charles Fort and Langston Hughes to Harry Houdini and Willie “The Lion” Smith (see below), waiting to walk onto the pages.

That’s always a hard question for an author to answer. One of my favorites is Dr. Roads’ encounter, in the basement of a Harlem nightclub, with pianist Willie “The Lion” Smith and his band. While hardly the heaviest-hitting scene in the book, the clash of cultures between the well-heeled physician/investigator and a group of hard-living jazz musicians was a delight to write and, I hope, to read.

On a more substantial level, I am enamored of the day which begins with Dr. Roads’ obligatory visit to The Crossroads, following up on rumors that Gabriel might have made a deal there, and ends with a hair-rising high-speed chase down darkened rural roads in which he is joined by a most unlikely companion. It’s an eerie, evocative sequence showcasing why the Delta is, and remains, such a powerful magnet for folklore, superstition, and strange tales of all varieties.

You talk about a real life jazz musician, can you tell us who that is and why you chose him for your story?

The musician who really gets “screen time” is pianist Willie “The Lion” Smith. I had fairly specific criteria for someone to fill this role. I needed a musician active in Harlem in 1929 who, ideally, also performed at some of the clubs where I decided that Gabriel Gibbs played. I got lucky that “The Lion” was among those fitting the bill; headlining the house band at the Catagonia Club (also known as “Pod & Jerry’s) during this time. Even in a jazz community filled with larger-than-life characters, Smith stands out. Talented, brash, cocky, and quirky (including a habit of referring to himself in the third person), he also seems to have a good heart; all of which is precisely what I wanted for this encounter.

Another musician, Artie Shaw, appears in that scene. Ultimately, Shaw went on to become far more influential and (the majority of critics would probably say) more talented than his mentor. But during the time of Gabriel’s Trumpet, Shaw was The Lion’s second, protégé, and clarinetist.

Although he appears in the novel only through the memories of characters, King Oliver’s role in Gabriel’s Trumpet is even more critical than “The Lion’s.” In 1929, Oliver was on the short list of Jazz’s best trumpet players — though a venerable monarch whose star is slowly descending rather than a fiery newcomer. It is by besting King Oliver in a jazz trumpet contest that Gabriel Gibbs obtains the funds necessary to break out of playing the rural northwest Mississippi circuit, move to New Orleans, and start making real money playing in Storyville’s clubs.

A final musician getting some attention, mostly through the remarks of Willie “The Lion” Smith and his band, is Jellyroll Morton, a pioneering jazz pianist so colorful as to make The Lion sound like a choir boy.

We want to thank Jon black for taking the time to answer some of our questions.

Gabriel’s Trumpet is available both in print and as an ebook.

Tune in tomorrow to see what our second Book of Christmas is!