The Chromatic Court: Rick Lai’s “The Man in Purple Tatters”

We’re pleased to present our next excerpt from The Chromatic Court – an exclusive look at Rick Lai’s “The Man in Purple Tatters.” 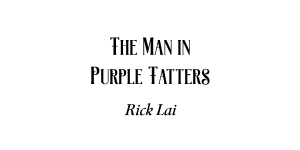 Introductory Note: The following is a translation of the last story from a 1737 French collection of folk tales. The translator, James Allington, mailed this sample story to various publishers in the hope of securing an advance to translate the entire book. Allington’s tragic 1934 suicide prevented this project from reaching fruition.

Loyal disciples, the moment has come for my final tale, I have entertained you with marvelous accounts of the survivals of lost Shâlmali inside the Pyrennes, the loyal retainers of the mummified Pelishtim, the crimson jewel of Costranno, the disastrous Shrewsfield nuptials, the addiction of Genghir, the leprous Hunters at the Hour of Mutation, the places called Dagoth, the Chewer of Cornwall, the boneless progeny of Yin Chhaya, the nocturnal habits of the Auber clan, the culinary skills of the abbot Henricus, the lunar celebrations of Nakura, the remarkable lineage of Yogash the Nugite, and the judgment rendered by the Cadj of Bussorah. Now I shall regale you with a revelation concerning one of the most respected families in France.

Submitted for your perusal are a pair of documents. Astute scholars will notice the discrepancies between the accounts of the Black Priest’s capture in the first document and The Chronicle of Jacques Sogue. The author of the latter work inflated the size of the force commanded by the Sieur de Trevec to a thousand men, and mistakenly portrayed Saladin as the Black Priest’s patron.

The Testament of Paul Henri Balfour

Our family confessor, Father Joseph, brought the Caravan of the Shepherds to my attention. This wandering troupe of performers had been touring the Duchy of Brittany for weeks. My uncle Yves, the Sieur de Trevec, had permitted the Caravan to pitch its tents on his estates. Father Joseph had heard troubling rumors that the Caravan was engaged in witchcraft. He urged me to arrest these sorcerers and turn over them over to the Holy Church for proper punishment.

Before departing to see my uncle, I gazed at the portrait of my beloved father, Alain Balfour, the prior Baron de Korlette. When Richard the Lion-Hearted had joined the Kings’ Crusade, his sister-in-law, Duchess Constance of Brittany, had permitted my father to form a company of Breton volunteers to assist in reclaiming the Holy Land. Serving as my father’s chief lieutenant in this campaign was my mother’s brother, the Sieur de Trevec.

“Father Joseph is an interfering fool!” proclaimed my uncle upon being informed of my mission. “The Caravan is not a nest of devil worshippers. They are Christians from Syria. They wait for the emergence of a star that foretells the Second Coming of Christ. In fact, their leader is Rustum Dadh, the Persian who served your father faithfully.”

“My father’s translator in the Holy Land! I shall hold a banquet in his honor!”

“Rustum is in no condition to celebrate. His face is frozen in a blank expression. He alluded to a horrible ordeal. I pressed him to say more, but he insisted that the details were for your ears only.”

“Then why has he not contacted me?”

“Only Rustum can provide the answer, but I can tell you this. He asked me about the Man in Purple Tatters.”

My uncle was referring to a horribly deformed individual who had interrupted a banquet at the nearby Chateau d’Ys five years ago. While the intruder was never found, a subsequent investigation revealed a troubling discovery at the nearby cemetery. The locks on my family’s vault had been broken.

As I rode towards the Caravan of the Shepherds, I recalled my father’s accounts of Rustum Dadh. Originally a member of the Christian community in Persia, he had fled to Palestine to escape the persecution of the Assassins. This infamous association of murderers dominated the mountains of his native land. To his dismay, the Assassins gained control of Masyaf, a city in northern Syria. The Sultan of the Saracens, Saladin, had initially sought to suppress the Assassins. One night, Saladin awoke to find a note pinned to his pillow by a poisoned dagger. Having proven their ability to slay Saladin, the Assassins successfully imposed peace terms on him. Saladin’s accord with the Assassins had outraged Rustum. He offered his services as translator to the Crusaders led by my father. When King Richard withdrew his forces after signing a treaty with Saladin, Rustum remained in the Holy Land.

The Caravan of Shepherds consisted of about twenty wagons. The performers included jugglers, acrobats, puppeteers, and men on stilts. There was a single pitched tent. A sign on the right side of the entrance simply read “Astrologer of the Shepherds.” On the left side was a black goat tethered to a pole. Attired in a white robe and gloves, a bald man exited the tent. Mounted on my horse, I approached him,

“You greatly resemble your father. I knew him in the Holy Land. I am Rustum Dadh, the Astrologer of the Caravan. Please dismount and accept the hospitality of my tent.”

Inside the tent were a table and two chairs. A pitcher and two wooden cups rested on the table. “Please be seated,” requested Rustum. My eyes scanned the Persian’s countenance. His face was expressionless. All life seemed to have been drained out of it.

“You are staring at me,” interrupted Rustum. “My facial muscles are paralyzed. I am incapable of registering emotion. My malady is due to the shock of witnessing the extermination of my entire family at the hands of a powerful enemy. The Sieur de Trevec informs me that you have a wife and three children.”

“True, but why mention them?”

“Because my enemy is your enemy! The monster who butchered my family threatens yours! Forgive me, son of my old friend! I vacillated over contacting you. I hoped to eradicate this horror without involving you.”

Rustum reached for the pitcher. “This is consecrated milk from the goat outside. Before we discuss the death of my loved ones, join me in a toast of long life to yours.”

After Rustum poured the milk, we drank together.

“You have tasted the Sacred Milk of the Great Mother!” proclaimed Rustum. “May it show you the Awesome Truth of the Ruler of All That Was.”

A great weariness overtook me. My eyes closed in deep slumber. I dreamed of a door bearing the symbol of a white hand. Opening the door, I witnessed a series of scenes from the past.

A church appeared. I recognized it as the Chapel of St. Gilda on the Breton coast. Thirteen individuals entered the holy sanctuary. They all wore black robes with raised hoods, but one of the robes was adorned with a black star outlined in purple. The interior of the Chapel had been desecrated. The altar was draped in black. The nearby crucifix was inverted. Three idols now resided to the left of the altar. The first was a satyr with ram-like horns, despite its clearly masculine face, it had the breasts of a woman. the second was of a wizened old man devouring a child while sitting in a throne designed from conch shell. The third was a bald man with a strikingly handsome face and the wings of a bat.

The figure in the robe with the black star took his position in front of the altar as the twelve others knelt before him. Lowering his hood, he revealed himself to be a bearded man with long black hair and bushy eyebrows. He proceeded to perform an obscene mockery of the sacred Mass. Eventually he reached the portion of his unholy ceremony that corresponded to a Sermon.

“The Black Priesthood is under assault from Duke Geoffrey,” stated the man with the ebony star. His right hand reached into a small pouch tied around his waist. He pulled out the small wax effigy of a man riding a horse. “This is the image of our oppressor. The Duke is participating in the jousting tournament in Paris as I speak. The time has come for this persecutor to face the wrath of the King of the Disinherited and the Older Ones who preceded him on Earth. We have gathered here to perform the Rite of the Nodensestbat. I, the Abbé Sogue. who deserted the Church of Rome for the True Faith that began in the Tower of Semaxii, shall make the invocation.

“In the name of the Ram with a Thousand Young and its Unspeakable Consort. and their Herald, the Monarch of Yrimid, I petition the Lord of The Great Abyss to smite our accursed foe! O Thamogorgos, O Darkness that spawned the Black Goat, O Primal Master of the Sea Serpents, O Sovereign of the Night-Gaunts, we beseech you to punish Duke Geoffrey of Brittany! May the hoofs of your phantom chargers crush him as I crush his likeness!”

His hands seized the waxen effigy and quashed it into an unrecognizable pulp.

The scene shifted to a jousting tournament. A bout had just occurred. The loser had been unseated from his horse. Mounted on his steed, the winner raised his lance in triumph.

“Victory belongs to the Duke of Brittany,” declared the master of ceremonies.

Led by the King of France, the crowd applauded. Suddenly the extremely loud neighing of horses interrupted the applause. Geoffrey’s charger suddenly fell sideways. to the ground bearing its passenger with it. With his right leg pinned beneath his horse, Geoffrey could not escape his saddle. Blood bust forth from the rider and his steed as if they were being trampled by unseen hoofs. The spectators gasped in horror.