We’re pleased to present our next excerpt from The Chromatic Court – an exclusive look at Micah S. Harris’ “Tatterdemalion in Grey.” 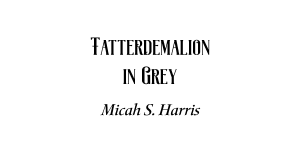 I performed my marionettes beneath the ribbons and wreaths of smoke that had been my fellow Jews. The children on the grass before me did not understand that the ashes brushing their faces were kindly Mrs. Schwartz or perhaps gentle Malachi, the middle-aged half-wit. The children had given him the only friends he had ever known in the shadow of the Lethal Chamber which, in time, had come to embrace him as well.

Transformed into the ash that touched their cheeks, the atoms of their elders caressed the children in their passing. I hoped it gave the dear departed comfort, for the young ones had, thankfully, no comprehension of what was happening. They were concentrating on my marionettes who moved to the musical accompaniment of my friend Eli on guitar.

Perhaps you think me worse than a dybbuk to carry out such play in this grimmest of situations. But it was Purim, and all special merriment had gone out of the children’s lives forever. Though, among those on the grass that day, only Eli and I knew that.

Then they came. I could see them at a distance, pausing, curious, pointing this way. A sheen of perspiration was now upon me and the breeze touching it made me shiver as I watched them coming closer.

But what was this?

The two Nazi soldiers appeared as mesmerized as the children by my puppet show.

They came silently until they stood within only a couple meters behind the children, who, so enrapt with the hanging of Haman the Agagite on his own gallows, had not noticed their approach. The men watched, exhibiting no desire to stop the show. But their presence alone did so anyway. I was perspiring now (Haman the Agagite had tripped on his way to the gallows accompanied by the off-noting of nervous Eli) and brought things to a hasty close.

Only then did the children notice the soldiers. They blanched and drew away like puppies threatened with a stick. They trembled on the grass, afraid to move, afraid to stay, until one of the Nazis barked “Go,” and the children fled.

I was quickly packing up my marionettes when they came to stand over me, their shadows blocking the sun. I felt the chill from the dew on the grass. The soldier who had shouted at the children said, “Not you two. Puppeteer, you look familiar…Yes, I have seen you cleaning up in the latrine,” he pointed at me. “You are Herr Scheiss Meister.”

“I am Herr Scheiss Meister, yes. You have spoken correctly, sir.”

“How is it that you have been allowed to have your toys, Jews?” he asked, looking from me to Eli, who kept shifting his weight from one foot to another.

“I have a dispensation from Kommandant Heinz. He remembered me from bringing his children to the Kinderhaus in Frankfurt. I entertain them privately now on occasion at his estate. They like me…the children.”

The truth was Heinz only had one child, one far more witless than poor Malachi had been. One that he kept secret from the rest of the master race. But, as hard as it is for me to say, that damned Nazi loved his boy, who had so little to enjoy in this life. And my puppets made him laugh. And I was in no position to reveal the family secret.

“You have papers to support your story?”

“Yes,” I said, fumbling them out and handing them to him. “And they include Eli. He makes the music for the puppets. For the children.”

He looked them over, lingering, I think, just to unnerve us. There was no denying Heinz’s signature and official seal.

He handed my papers back to me.

“Pray they don’t grow up fast,” he said.

Then their stern faces melted away.

“How do you do that? Make them walk like real people?”

“I, uhm, observe.” I tapped my sweat beaded forehead. “I remember, and when I am creating a characterization, then I figure out how to convey it down the strings and into their limbs.”

“That girl, she was like a real little nixie! Make her prance on the grass!”

He played, managing to hold the tune together, as I timed, paced, and choreographed the Esther puppet’s steps to it. Despite my nerves, I was able to make it through.

The Nazis brayed in laughter, shoving each other.

“My father,” the one who was not Hans said, “is a clock maker. He made automatons for us kids. One Christmas, he made for me the robot from The Sandman.”

Wasn’t that robot a girl, I thought. So, your father gave you a girl doll when you were a little boy? That would explain much, including your trousers, Herr Kommandant: do they make them for men, too?

“I have an idea. You, Herr Scheiss Meister,” he said, “will create a puppet play especially for me and my men.”

“Sir, you are asking a lot of my talents…”

Their countenances fell and they frowned down in unison upon me.

“Do you feel you are being used too harshly, Jew?” the one who wasn’t Hans asked.

A cloud’s fleeting shadow passed over us, and I felt the presence of the smoke hanging in the air again. “No. No, Kommandant. Give me a month. And you will be much entertained.”

“And you make it real, just like you did here. None of that…” he looked at his partner, “…Hans, whadaya call that decadent film we saw at the cinema, the one I couldn’t sit through, but you did?”

“The Cabinet of Dr. Caligari.”

He looked back at me. “No expressionism. You make it as natural with your puppets as der Fuhrer paints. And—you know the dance the Maria robot did in Metropolis! You know that sexy dance? Yes? You do something like that with this girl puppet here.”

“Good,” the one who wasn’t Hans said. “We will be spreading the word. The men will be looking forward to Maria.”

The two of them walked off cackling like school boys. I suppose in anticipation of salacious puppetry.

“It seems I have become Shahrazad,” I said to myself.

My first thought was this questioner who had come from nowhere was another Jew observing Purim, for masquerade also was part of our ceremonies. But this was none of the historic personages involved in the story of Esther. This was no Mordecai, no Xerxes, not even a Haman. I had never seen any guise such as this.

The mask he wore was made of dented pewter and covered the entire head. Over this was a grey hood. The mask’s expressionless features were Byzantine, offering only a suggestion of eyes and a mouth, conveying a sense of a lack of humanity in whoever wore it.

Around his tall, straight frame was a ratty robe the color of slate. His hands were wrapped in bindings the hue of ash. There was a scent about him, too, that I found disconcertingly unpleasant. That he would stand out to an olfactory sense dulled by my living among a people forced to dwell in filth stunned me as much as anything about him.

“Who are you supposed to be, friend?” I said rising, fearing that I was in the presence of a leper. Eli, too, was regarding the stranger with obvious discomfort.

“I am Abhoth, the Grey Eminence.”

And I shuddered at that title. Yet he did not bear the Cendrée Sign, the tinctured constellation of the noose of the Hyaenas. Perhaps…

“That…is not a character from the scroll of Esther,” I said with a small laugh.

“No. I am pestilence from the second scroll of Moses.”

“That puts you out of place at Purim, but it explains much about your appearance. Who are you? I mean, behind the mask.”

“I am as you: a marionettist.”

“Are you one of the subversives who used marionette theater to spread propaganda against the Nazis?”

“I am one apt at subversive puppetry.”

“I understand why you are here, then.”

I was loath to have his perhaps unclean fingers take hold of my marionettes, but I felt obliged to offer a doll to him to demonstrate his art. He made no move to take it.

“You don’t use strings?”

He turned his mask toward Eli, who took a step back as the man in grey walked toward him. Eli held his guitar like a shield. The stranger’s wrapped forefinger reached out and plucked the top bass string. Suddenly, the E-note buzzed in the air.

“None with which you are familiar.”

He pressed the top string against the third fret, plucked it with his other forefinger, and the same vibrating string became the G-note.

“Nor the way you use them.”

He slid his finger down one fret. Plucked the same string again…

And the string became a grass snake stretched along the guitar neck.

Eli screamed and thrust his instrument away. It struck the ground with a discordant cacophony from all jarred six strings, the top one once again itself.

I stared at the guitar. What Eli said made it clear that we had seen the same impossible thing. But where pious Eli had seen a miracle, my jaded eyes had seen but an illusion.

“No. Merely a marionettist. Strings permeate everything. And often they are not necessary at all for my craft. Now, these Nazis want you to give them a puppet show,” he said. “They think they pull your strings. But let us school them on the loss of category between puppet and puppeteer.”

“Even given that such an effort as you propose sounds especially suicidal, how exactly would you go about doing that?”

“With a scenario which will cause their Prussian minds to collapse.”

“You are talking of a play…that can drive people insane?” I looked at him in his costume and shuddered, for now there could be no doubt.

“They are already insane. The play will do for them what is far worse. It will grant them perfect lucidity.”

“And…the title of this play?”

“It is called Tatterdemalion in Grey.”

I felt myself pale.

“You…you wish for me to perform that? With puppets?”

“You are familiar with it then.”

“You are supposed to be that Grey Eminence?”

“I am that Grey Eminence.”

“I see,” I see how you lost your mind, I thought, if you were in a production of that play. “Tell me: was…was it in Berlin? In the Weimar days?”

“But were you to be part of the Berlin cast of Tatterdemalion in Grey? Were you there?”

“Then you understand why I will not be involved with that abomination.”

“Why do you resist? You bear these Nazis no love—to say the least.”

The way he had said that last. What all did he know about Berlin?

I looked at him. “It is not for them that I won’t do it,” I said and felt my lower eyelids begin to brim.

“Perhaps you fear what it will do to you. But is it worse than what they have already done?”

I looked at him.

“You are judged already.”

I trembled at that blank, pitiless face.

“So,” I said after a long pause, “why not have revenge while I still can?”