We’re pleased to present our next excerpt from The Chromatic Court – an exclusive look at John Linwood Grant’s “The Songs of Burning Men.” 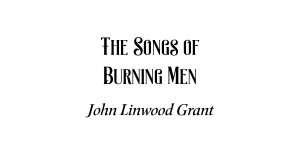 A dereliction of a soldier’s duty, you might say. The sky cleared, briefly, around eight o’clock, with the barest fingernail of a moon above us. Despite being instructed in the use of a trench periscope, Carter tried to peer over the parapet towards the enemy lines. The firing step in that section is a broken ledge of smeared clay, as likely to precipitate a man into the filth at the bottom of the trench as to give him sight of the enemy. He rose, but as he tried to take position, his left foot lost traction on the clay. Had it not done so, the German bullet which ricocheted off his helmet would have taken him in the forehead.

Carter was spared to die elsewhere; I was spared the letter of empty words that I would owe his mother. “Your son showed the finest spirit of the British serviceman, and performed every duty with cheerful…” The usual lies. Carter was a draper’s apprentice from Chelmsford—less than competent as a soldier, and too stupid to be afraid.

The boy ran his fingers along the mark where the bullet had scarred his helmet, barely sensible of his fortune. I wanted to scream at him, but I had the shakes again, and needed to get away.

In the early hours of this morning, some Hans or a Fritz had sighted his battery so well that it dropped twenty rounds of shells directly on the reserve trench, on the men who were there to support us. I had felt it necessary to go back, to see if there was anything I could do.

The men there had done their duty. Khaki rags, torsos and severed limbs lay everywhere, and the shelling was still bloody. I crouched in the muck and waited it out. Almost an hour later, I borrowed the whistle from their dead lieutenant. Bewcastle, he was called. I’d known him in training, but few would have recognised him from what was left.

When I blew the whistle to signal the all-clear, only one man managed to stand up in the section, and he was immediately hit in the head by a sniper’s bullet. Killed like Carter should have been.

“Hell of a shot,” said the corporal who’d accompanied me.

At dawn I sent two men and as many stretchers as I could spare. They could search the rubble for wounded. There must have been a functioning Aid Post somewhere. Or was this all there was, fields of wrecked trenches and moaning half-men, all the way back to the Channel? I was no longer sure.

Sergeant Graves was in the dugout, stretched out on one of the bunks meant for commissioned officers. At least the phonograph was silent.

“We need someone forward, in one of the listening posts before nightfall, sergeant.”

He looked up, his face stubble and vinegar. “Probably do.” He made no attempt to move.

I had imagined shooting Sergeant Graves. No one would have stopped me, and no one would have bothered to investigate. My Webley was somewhere under the barbed wire out there—an aborted assault—but the Luger I’d borrowed from a dead German officer would do the job nicely.

Graves stood up and left the dugout. He would get some corporal to choose a lucky man, a terrified eighteen year old who had to crawl along a shallow, badly-dug trench to the sap-head. That man’s night would be filled with the laughter of the Germans, or the cries of the wounded, until he himself was heard and a grenade was lobbed into the sap-head to end all his fears. Or not. Maybe Carter would be sent, and he would miraculously survive again.

I took up pen and paper.

“Dearest Aggie, we are trapped in a Godforsaken bend in the forward line, with no relief for over a week. Command has forgotten us. The Germans (a company of Saxon infantry, I believe) are erratic and confused; my own men are tired, and of less use than geese. Tell the King we are dying here, for the sake of the mud on dead men’s boots.”

Then I tore up the note, and found the whisky. Graves hadn’t touched it, which surprised me. More rain was coming, which would bring the dead rats and ordure above the duckboards. We would have to dig some sort of secondary sump.

The usual evening shelling began halfway down the bottle. Outside the dugout, Private Netherby was whistling. It was the tune from that damned record. Four or five times a day someone slips into the dugout and starts the phonograph up. If it wasn’t the only music for the men to listen to, I would snap the record in half.

I cursed whichever officer had left the machine here. It wasn’t British. Some of the dugouts and emplacements are French, from earlier in the war. Sappers and unhappy soldiers extended the trench system, clearing the dugouts and funk-holes as they went. Home-made grenades, a snapshot and a postcard or two—even once a half crate of a quite decent red. And the phonograph, with its single surviving record…

I left the whisky and went out to check on the men. Night had made its way through broken trees and settled over the corpse-strewn wire between the lines. Most of the bodies were from a German bombing party, caught clipping the wire when a flare-shell blossomed crimson directly above them. Even Carter had managed to shoot one. I had virtually no sense of smell since my hospitalisation, but I was told that the wind brought a hellish stench.

“Useful,” said Graves, one morning inspection. “If we can smell them, it means the wind’s blowing this way. Ideal time for a Hun gas attack.”

So the corpses became known as ‘canaries.’ Shattered limbs and bloated bellies, in a cage of rusting wire.

The night was monstrous with the noise of an artillery barrage from both sides, much as the night before. Inspection, and a check that everyone had their gas hoods ready.

Twenty seven men, stretched across a section of trench that would have better suited at least two platoons.

“Think we’re in for a pounding, sir,” added Elliott.

He was correct. Tonight’s barrage was relentless. The spotter planes must have failed to find the batteries involved. The high-pitched scream and whistle of shells passing over our heads made conversation almost impossible. I had Graves set up a couple of the trench mortars.

“Lob a few over, sergeant.”

If this bombardment was in advance of an assault, I wanted the Germans to know that we were still there and ready to fight. We had the range of their forward trench, whilst they seemed to have no mortars to hand. Half the bombs were duds, but it would make them think.

The dull crump of the trench mortars added to the racket, and as usual. the men began whistling. The first few nights I stopped them, but it seemed pointless. Low and discordant, the sound rose above the revetment and the sandbags. Even when our own guns opened up, far behind us, I could still hear it.

I had someone sent to get news from the listening post. In the darkness, a German shrieked. We hadn’t fired a shot.

“They’ll break soon, sir.” Corporal Elliott grinned. “We should go, up and over.” He had one hand on the hilt of his bayonet.

“No.” I didn’t bother to explain further. We hadn’t tested the German wire recently, and we had no idea of their strength.

I walked further along the trench, slipping on the wet duck boards as I made my way down a traverse.

“Careful there.” Graves again, crouched with a couple of privates.

“Is the Vickers ready?” I ignored his refusal to acknowledge my rank.

He nodded, a furtive bob in the light of a lantern. Over the rear lip of the trench, I could see the gleam of the Vickers’ muzzle, our only fully-working machine gun. There was another, nested twenty yards north, but it had a tendency to jam.

“Make sure it stays that way, sergeant. They could still make a push tonight.”

A private ran down the trench towards us.

The man—Coker—stepped back, as if I were going to hit him.

I cursed and followed him to where the shallow trench to the listening post began. Elliott was there, shading the lit stub of a candle. I flashed my torch at his uniform, which was smeared with a fine red ash.

“I went up there, lieutenant,” said the corporal. “Wasn’t a shell. The listening post was sort of flattened out, scorched.”

“I think this is Private Netherby, sir.”

He brushed his tunic with his free hand, and the red-brown ash scattered over the duckboards at his feet. Elliott didn’t seem overly concerned about the affair.

“Flamethrowers.” Coker pressed himself closer to one of the funk-holes in the side of the revetment. “Bloody hell.”

“Easily dealt with.” I kept my voice steady.

I’d seen the flammenwerfer teams in action, at Hooge. They were alarming at first, but it only took a shot to the tanks on the soldier’s back, and they made themselves obvious enough once they began their work.

I passed the word that lookouts should be at every observation slit.

The enemy did not come. At four a.m. I went to get some sleep. That did not come, either.