We’re pleased to present our next excerpt from The Chromatic Court – an exclusive look at Glynn Owen Barrass’ “Curse of the White Inferno.” 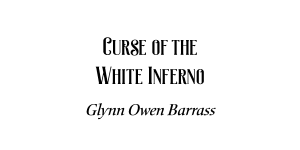 Music filled the wall-speakers, a dramatic orchestral piece that Howard knew from the script was called Omphale’s Spinning Wheel. As the violins reached a crescendo, the announcer, Sidney Fry, leant towards his microphone and began:

“Your local Black Diamond Coal dealer presents The Red Hook Mystery Hour, starring that menace of all crime and evil–doers and the scourge of the Underworld! This mysterious scarlet–clad figure of the night devotes his life to destroying evil, righting wrongs, and bringing justice to the unjust. Tonight’s installment sees him in his continuing adventure across the wilds of Alaska, as he resumes his quest to save plucky reporter Helen Asher in…The Curse of the White Inferno!”

Some sudden movements turned his attention to the sound booth to his left. The FX Man, Fred Williams, was darting frantically beyond the glass screen. He stopped, and the chaotic noise of a snowstorm replaced the music.

“Night, dark and windswept. When last we saw him, The Red Hook and his Mestizo-Indian tracker, Castro, encountered a terrible snowstorm while on the trail of Asher and her kidnapper, the escaped criminal Adolph Venke. We return now to our hero’s plight as he battles the elements, in his mission to catch Venke and rescue his helpless victim.”

Fry smirked, his pencil-thin moustache twisting with his lips. He bowed a head of slicked black hair, winked in Banks’s direction, and pointed to Howard.

Howard swallowed and got into character. “Castro,” he said in a deep, resonating, tone, “I can’t see anything in this blasted storm. Should we seek shelter?”

Redheaded Red Furlong, who had a number of roles on the show, replied in a deep but stilted voice: “No, Master, we must move on. This be heap big trouble, and dark forces wait ahead. We must push through.”

Howard cringed at the dialogue as Red/Castro continued. “Look, Master, a shape in the snow.”

He remained silent for a few moments, allowed the faux footfalls to fill the void, and said, “No! It could be Helen Asher!”

Faster footfalls followed, and Howard cried, “Helen, no!” Sounds of snow being uncovered filled the speakers, but to Howard, they more resembled scraping sandpaper. “Why, this is—”

Howard was quite impressed by the eeriness of Red’s howl.

“Come back, Master, it is a thing of evil, a Snow Thing!” Red said, slipping from monster to Indian speech flawlessly.

“Why, what foul abomination is this?” Howard said. “The thing has drooping gray skin, hooves for feet!”

Howard saw Banks giggling in the corner of his eye.

“No matter,” Howard said, and glancing at the Sound Booth, saw Fred lighting a blowtorch. The roaring flame joined the snowstorm, and Howard continued in a bold, commanding voice, “Foul beast! Face the justice of the Red Hook!”

The metallic din of slashing blades followed, and Red released a painful-sounding roar.

“Oh no, Master,” he continued, shifting again from monster to man, “More Snow Things!” He roared again, and according to the script, it was the announcer’s turn to speak. Silence followed, however, and Howard looked from his script to find Fry whispering to Banks.

The man looked up and quickly got into character.

“As the Red Hook and Castro are attacked, some distance away, in the dark woods, the evil Venke observes them. He is accompanied by his Medicine Man guide, and their unwilling prisoner, Helen Asher!”

“Why, you fiends!” Banks said, with a voice just as lovely as the woman herself.

“Ha ha ha ha ha ha! Foolish girl, did you really believe that red-clad buffoon would save you?” said Harold Trent in his trademark villainous tone. Blond-haired with a round, ruddy face, he looked far from villainous in reality. “Their plight is nothing compared to the coming wrath, the wrath of The Wind-Walker! Ha ha ha ha ha ha ha!”

Banks filled the studio with a high-pitched, ear-jarring scream, and the orchestral music reappeared.

It was time for an intermission, one that Howard sorely needed.