The Chromatic Court: Christine Morgan’s “When Lavender is in Bloom”

We’re pleased to present our first excerpt from The Chromatic Court – an exclusive look at Christine Morgan’s “When Lavender is in Bloom.” 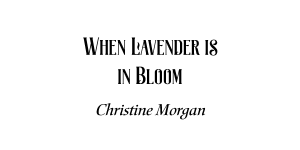 “It is a bad place for a stranger,” the old man told me. “You’d better take a guide.”

I turned to look at him. He sat frail and wizened in a wheelchair, wearing a soft heather-colored sweater. A crocheted blanket lay over his lap, suede slippers protruding from beneath its edge. How he had gotten up here to this cliffside viewpoint was, at first, beyond me. Then I saw, not far away, one of the many care-complexes clustered along the outskirts of the town, and supposed he must have wheeled his way over from there.

“I shall not lose myself,” I replied, or hoped I did, in my careful guidebook French. The local dialect was different from the Rosetta Stone crash-course I’d undertaken before this trip, and I went about in perpetual fear of inadvertently insulting someone.

His smile was the saddest I’d ever seen, the sigh accompanying it a wistful breath of eternities. “That’s what I said, so long ago. That’s what I said. And of course I did lose myself. I lost myself and it was wonderful. I would have stayed lost there forever. You’re American, aren’t you?”

“Yes.” I knew of fellow travelers who preferred pretending otherwise, claiming to be from Canada to escape the not-altogether-undeserved reputation, but I sensed no accusation in his query.

A moment passed, a waiting pause that seemed to hang like a held breath between us.

“Once?” I asked, when it seemed an encouraging nudge was somehow expected.

“When I was young,” he said. “Young, like you. American, like you. Though, when I set out for my day’s ramble through the moors, I went with a gun upon my shoulder, thinking perhaps to hunt.”

I held up my botanical collection kit. “I only hunt with this.”

“Good. That’s good. Quieter. More peaceful. Though there is something to be said for the older ways, as well. When hunting was as much art as sport.”

Below us, where the steep switchbacked path I meant soon to descend met the sprawling denseness of hilly green grass and bracken I also meant soon to traverse, a brown hare bounded from the underbrush in long leaps as if to prove his point. A breeze wafted up to us, cool and sweetly fragrant, laden with the clean scents of nature. It stirred wisps of hair against my neck, long strands escaped from both braid and hiker’s cap.

The old man looked me over, and I braced for the usual admonitions, as if every woman traveling abroad alone was sure to end up in some Eli Roth torture dungeon. Instead, he smiled again with his sad smile, and said, “Beautiful, and cruel.”

“I beg your pardon?”

“The moors. Beautiful and cruel, like a woman. They are enchanted, you know. I used to go back often. As often as I could. Always searching…always hoping…that this would be the time, each time, and I would find my way again…my heart bade me try and try, even as my mind already accepted the truth. Had I not seen the stone? The shrine? Had I not read the words inscribed upon it? Oh, but fate is also beautiful and cruel, and history inexorable.”

He went on as if I hadn’t spoken. “The past was set; I had been and gone and played my part. I left her. I did not wish to. I would have stayed. But fate, so cruel, so beautiful, had other plans. No matter how I retraced my steps, how long I wandered, how far I explored…no matter how many nights I spent sleeping there beneath the sky…and sometimes I would hear the whirr of wings, the cry of a hawk or hound, and such joy would leap within me…”

His voice trailed off into a quaver, even as tears trailed from the creased corners of his eyes.

“Monsieur…” I’d taken a half-step toward him, reaching out as if to place a hand upon his shoulder, moved by his evident grief despite my lack of understanding. Before I could complete the gesture, his own hand shot up and seized mine. His grip was tremulous, but surprisingly strong.

“I had seen the stone, the shrine,” he repeated. “She died for love of me. She pined, she languished. Perhaps she believed I had abandoned her. I was torn from her, cruelly torn, and there would be no returning. I could not change the past.”

Uncomfortable, if not quite alarmed, I tried gently to free myself. He held firm. His eyes met mine, and through their veil of tears they were sharp and bright.

“After a while,” he said, “I stopped. I stopped trying. After years had gone by. So many years. She loved a young man, you see. A healthy one, and handsome. Not some ancient relic in a chair. What use would I be to her now, even if I did find my way?”

Someone came hurrying toward us, a bustling gingerish fellow with a broad and freckled face. He wore the kind of smock-top and pants I associated with hospital scrubs, in a shade somewhere between mint and moss. Various antiseptic smells—liquid sanitizer, bleach, iodine—hung around him in a cloud, and the fact he’d attempted to counter these with liberal applications of body spray and aftershave did not help the situation.

“Philip, Philip!” he chided in the sort of tone one would use with a wayward child. “Whatever are you doing out here? My apologies, mam’selle! Did he frighten you?”

“Of course not,” I said. “We were merely talking.”

The old man, Philip, had released my hand. His momentary vigor, the strength of his grip and the bright sharpness of his eyes, dulled. He sagged in his wheelchair, looking even frailer and more diminished. His gaze drifted off forlornly across the vast expanse of moors.

I was struck by a sudden, unfamiliar, almost overpowering urge to kneel and embrace him. To tell him that, yes, I knew what it was to yearn for what was lost, for history and bittersweet nostalgia.

Was that not why I’d come on this trip? To attempt, in my own fashion, to recapture bygone eras? To return to simpler times, reclaim the cleaner and purer essences of an earlier age? For personal reasons as well as for business, though my personal reasons might have been deemed less than acceptable in other than these tolerant, enlightened, more modern days.

The fellow in moss-mint scrubs came closer, further assailing me with an intensifying melange of chemicals. No doubt, he thought his grooming regimen would make a favorable impression on the ladies, be they nurses or doctors or visiting relatives of patients. Or, as was the current case, a chance-met vacationer such as myself. His grin broadened. Little did he know, of course, that such particular pursuit was an effort in futility to begin with, and his pungent choice of product only made matters worse. My nose wrinkled.

I noted, by contrast and in passing, that his charge smelled mainly of unscented soap and a pleasant blend of breakfast teas, underlain with a faint hint of some medicinal ointment.

“It was a snake,” Philip said. “A serpent, a venomous viper. It struck me. It would have bitten her as well, but I flung her away.”

“Don’t mind him.” The orderly fussed around, adjusting the crocheted lap-blanket draped over the old man’s legs. “He’s no harm at all. Just wandered off, as they do sometimes. You see how it is.”

Oh, I saw how it was, and found it disturbing, even offensive. The patronizing manner, the tut-tutting, the talking over and around, the conspiratorial tone almost like a wink. How tragic, the elderly, how pitiable in their decaying bodies, with their eroding mental states. While we, we two, we possessed vigor and vitality. We counted. We mattered.

“Jeanne,” Philip sighed, still gazing as if into a distance of years as well as miles. “My dear Jeanne.”

“It has been nice meeting you,” I said to him directly. “But I must be on my way, if I’m to be back before dark.”

“Philip,” chided the orderly. “Enough of that. You’ll upset this pretty—”

I leveled him a cool look, then bent and touched the old man’s bony wrist. “I will. If I meet her, I will tell her.”

His other hand covered mine, warm, and patted. “Thank you.”

“Mam’selle, you should not encourage him.” The orderly’s tone had changed, become huffy and brusque. Disapproving. How dare I. “Come along, Philip. Let’s get you home.”

Lingering a moment, I watched him wheel the chair away. He pushed it with purposeful strides toward the care-complex. Philip sat placidly, letting himself be rolled, head hanging. It still seemed I felt the warmth of his hand on mine, and my heart went out to him.

Then I adjusted the straps of my small day-pack, slung my botanical kit over my shoulder, snapped my folding titanium hiking stick to full extension, and faced the switchbacked cliff-path. I inhaled deeply of the fragrance-laden air. Earthy. Natural and clean.

I smelled wildflowers and budding blossoms, and…lavender? It seemed too early for lavender; my itinerary included Provence in July, when it would be at the height of the season.

Yet, I did catch whiffs of it now, lovely and teasing on the breeze.