Sockhops & Seances: Joshua Wanisko’s The Case that Baffled the Boy

We’re pleased to present our next excerpt from Sockhops & Seances – an exclusive look at Joshua Wanisko’s “The Case that Baffled the Boy.” In small town Greenville, USA, there a boy with a dynamo brain. With it, he solves uncanny mysteries. We see three of his cases, including the unbelievable case he couldn’t solve. 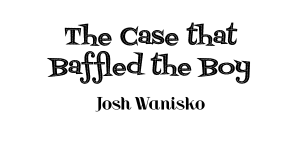 The Case of the Missing Hiker

In which we meet the boy detective of Greenville

Greenville was a humble harbor town nestled snugly in the coastal shore of the United States. On that we can all agree. Which coast and which shore was a matter of some spirited debate.  It was mostly white and mostly Protestant, but not as much as it used to be. Both of these traits were changing with the influx of immigrants after the war. Changing, but not too much, because Greenville was careful to allow only the right sort to settle there.

It had rich neighborhoods and poor neighborhoods and various ethnic enclaves, each of which were home to both wholesome families and the kind of activities we don’t discuss in stories for children. It had synagogues and temples, entire rows of churches lined up on the hill facing the harbor, even a mosque. It had a market district and a main street, a firehouse and a police station, for even the bucolic town of Greenville was not immune to crime.  It had sockhops, poodle skirts, restaurants, banks, and movie theaters, including a new drive-at showed the fancy new 3-D movies once a week.  It had everything Norman Rockwell imagined when he painted covers for the Saturday Evening Post. Plus, one thing more.

Greenville, you see, was also home to a living computer, a boy with a brain more powerful than the minds of the mathematicians who cracked the ciphers of the mighty Enigma engines and thereby threw sand in the gears of the Axis war machine. Like anyone else, this boy had a name, but it was seldom used except by his parents and his teachers. Everyone else referred to him with the title of a reference book, just like another boy in similar circumstances who would be immortalized in song by Jim Croce twenty years hence.

THE BOY was the kind of genius that arises not once in a generation, or even as frequently as once in a lifetime, but the kind of world-shaping intellect born once in the history of a civilization: an Isaac Newton, a J. Robert Oppenheimer, an Abdul Alhazred. THE BOY used his prodigious intellect to help around Greenville, not to change the course of human events. That would come later.

THE MOTHER was a thoroughly modern woman, college-educated and tolerant. She had worked as an English teacher before leaving that career to start her family. She knew much and spoke little.

THE FATHER was the chief of police. He would often solve crimes over dinner. Particularly perplexing problems would give him pause and THE BOY and THE MOTHER would know when he was mulling over a vexing case, as he would play with his food rather than eating it.

Tonight’s meal was a family favorite prepared with wholesome American ingredients from a recipe that originated in the plateaus of the old country. The name translated as sweetbreads in cream of dura mater, and normally THE FATHER savored every heady bite, but tonight he merely pushed the morsels around in their sea of rich peppery sauce.

THE BOY knew what was troubling THE FATHER but waited for him to speak. He had been raised to respect his Elders, after all.  So, THE BOY and THE MOTHER waited as THE FATHER sloshed his scotch around within its tumbler. They waited as he smoothed the napkin on his lap. They waited as he fussed with his notepad. Finally, after the appropriate amount of time had elapsed, THE MOTHER spoke. “Dear, there seems to be something on your mind. Would you care to talk it out with us?”

Like a vampire, THE FATHER had to be invited, but once he was he was eager to speak.  He pushed his plate to the side so that he could set down his notebook, which he opened.

“We know that Boss Eldritch ordered a murder of a witness, but he’s going to walk unless we can prove it.”

THE BOY nodded to acknowledge that he understood. The three-pound dynamo behind his eyes was already spinning. Boss Arcady Eldritch was a crime lord from the city. (It was not necessary to specify which one. Everyone in Greenville knew where you meant when you said “the city.”) He had been steadily expanding his empire, but so far, THE FATHER and his dedicated team of officers had managed to resist the incursion.  As I have said, Greenville was careful to keep the wrong sort out, and Mister Eldritch was most assuredly of the wrong sort.

“We have the sworn testimony from Eldritch, and I’m confident that it’s 100% factual.” THE BOY nodded, and THE FATHER continued. “He said he last saw the witness when he helped him out the door. He said he knew the witness would need to travel through the wilderness, so he filled his backpack with the supplies he would need, food, camping gear, a stove. I have a list, but I suspect it’s not important.”

THE FATHER continued. “The body of the witness was found in a clearing in the Arcadia forest. Eldritch’s agents on the state police investigated it and cleaned it up before we could arrive, so we don’t know how he died, but we do know that he was alone when he died and that he was not moved from the spot where he died.” He snapped the notebook shut. “Like Eldritch’s testimony, we’re certain the report is accurate, but incomplete in some fundamental way.  I just don’t know what it is. What do you say, son? Can you help out your old man?”

THE BOY’s pupils shrank to pinpricks as they focused on the light that burned at the center of the universe. His awareness red shifted millions of miles away.

The details of the case were not important. The ritual was.  THE BOY knew many things. THE BOY knew almost everything.  In these dinner table mysteries, THE BOY knew the answer to the question before THE FATHER started speaking. He already knew who stole the car, or the lucky coin or the forty pies. That was not the trick. The trick was instead asking the one question that would allow THE FATHER to prove the perpetrator’s guilt to the civil authorities.

THE BOY spoke, almost as an afterthought. “The door was on an airplane. The witness had been a paratrooper on the Raid on Los Baños during the war, so he felt that he could jump to his safety if he needed to. One of Boss Eldritch’s torpedoes took him on his private plane, the witness tried to escape, but this was what they intended; his parachute had been replaced with a hiker’s backpack. He fell straight into a clearing and died on impact.”

THE FATHER checked his notebook, but he knew his boy was right. He always was. “By George, I think you’ve solved it.” He snapped the notebook shut and shot to his feet. He kissed his wife on her cheek, then raced out the door. “I have some phone calls to make.”

THE BOY folded his arms and smiled gently. It was the only display of pride that he allowed himself. THE MOTHER was proud of her child, but she too had a role to play, so she gently admonished him to clean his plate.

This is not the story of that crime. The case was gruesome, but it was a quotidian caper for the boy detective of Greenville. Instead, this is the story of crime so twisted, so convoluted, so perplexing that it confounded even the matchless mind of THE BOY. We will read the account of that confounding conundrum in short order, but first we will we see a brief account of the way in which THE BOY assists his fellows in Greenville.

What is Greenville’s secret?

What case could be so DEVIOUS to stump the boy?