We’re pleased to present our next excerpt from Sockhops & Seances – an exclusive look at James Dorr’s “Bottles.” Maria Sanchez is assigned to be a maid for a strange, old man. Is he what he seems? Or is there something more at work in his mansion? 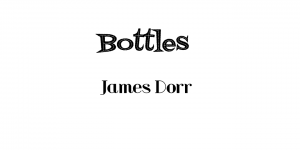 She came in on the New England Trailways, trusted that far, although she noticed the driver kept an eye on her every time the big bus stopped.  She came in at night, to the Park Square station across from the huge green they called the Boston Common.  That much she knew—at the School they had told her a few things she should know in case she got lost.  But she would not get lost, they said.  She would be met there.

She waited until the last passenger got off, then reached to the rack above her seat and took down her single suitcase.  She saw the driver was openly staring at her now, so she smiled as she passed him.  A modest smile only, though.

That they said also, at the West Haven School:  Maria, they said, you should always smile when strangers take an interest in you.  Show them your pretty teeth.  But always be sure to keep your eyes cast down, because you don’t want people to think you forward.

They said many things, Maria thought as she pushed past the driver and down the steps to the concrete platform.  She went in the terminal, seeing the driver reflected behind her in the plate glass door, nodding to someone who waited inside.  She glanced around her—the entrance door to the street outside so near—the newspaper kiosk with headlines displayed about President Eisenhower; Nikita Khrushchev replacing Bulganin, or anyway trying; riots in London and Nottingham, England; more trouble in Little Rock some place down south; a musical show still playing in New York called West Side Story—she thought she was hungry, and looked for a hot dog stand before remembering they hadn’t given her any money—and then, the man, large, that the driver had nodded to, dressed in a dark and too-tight uniform, striding toward her.

He glanced at the clipboard he held in his hand.  “You Sanchez?”

The large man glanced down again.  “From the reform school, you mean,” he grunted.  He reached toward her suitcase, as if to take it, then seemingly changed his mind.  “You’re lucky, Sanchez. Someone like you.  Getting a job at all.  With the recession, not even Americans can get jobs that easy.”

He motioned to her to follow him out to the parking area behind the station, then opened the back door of a large sedan. Maria bristled, but scrambled inside, pulling her suitcase in behind her.  Americans indeed! she thought.  As if people “like her” were not American citizens too.  And yet, she was lucky, she knew that as well—at nineteen years old, going on twenty, so they had told her, soon enough she would have to be leaving the School in any case, and without this job they had set up for her, it would be to prison.

And for what?  For stealing?  A piece of fake jewelry she’d seen in a dime store?  When she was just fifteen?

But at least they trained her, and, Puerto Rican or not she would show them how well she could work for this…now she herself took out a paper and studied its writing…for this Mr. Vlesco who needed a servant.

She tried to relax as the burly man climbed in the seat in front, to enjoy the ride to wherever it was she was to end up going.  It was like a limousine she was in, she thought, which explained the driver’s uniform.  He was a servant too, though not Vlesco’s.  She knew that as well, from something she’d learned not from the School’s teachers but some of the other girls who were there with her, on how to read a car’s license plate numbers to tell it was rented.

She was just as happy.  She saw how he looked at her in the car’s mirror, glancing from time to time to where she sat, alone, in the back seat.  Just like the bus driver.

She shrugged.  She smiled.  She flashed her teeth at him.  She looked out the windows at the lights of downtown Boston.  So bright.  So many.  She breathed in the air and smelled the ocean, reveling in the still warm night breeze.  Why not enjoy it?

For winter, as they would say at the School, would come soon in its cycle.

So why not enjoy it?  She thought of the School, its endless routine, work after breakfast, cleaning and sewing, repairing uniforms—always the uniforms—work after lunch too, then classes and “moral training” for three hours after dinner.  She marveled at the width of the river, the salt-and-pepper-shaker-like towers on the bridge’s main span as they crossed the Charles into Cambridge.  She shuddered then as the lights grew dimmer, still in a city but now a part gone to seed, of tenements and factory buildings.  But then soon enough the buildings grew nicer, as houses appeared, big houses with narrow lawns separating them one from another, yet still extremely old and some in ill repair.  Here the car slowed down.

And then—she held on as they turned a sharp corner, pulling into an overgrown driveway.  They came to a stop, in front of a house surrounded with hedges, the kind of house the local Bostonians called a “three-decker,” the light—it looked like the light of candles—shining fitfully through a front window.  She watched the door open as the rent-a-driver opened her own door and motioned her outside.

She heard him shout something she couldn’t quite make out, and then a reply from the front of the house in words that she also could not understand, as if in some kind of a foreign language.  And then the car started and she was alone.

She walked to the house, her suitcase in hand, feeling pressed down by the structure’s enormousness, three stories high and a peaked roof above that, and, save for the candlelight, all in darkness.  She climbed to the front porch, then suddenly blinked as a light—an electric light—turned on in the hall, flooding out through the still open front door.  Blinking again, she now noticed the man who stood holding it open, unlike the driver stretching his hand out to take her suitcase.

She saw that the hand was huge.  That was the first thing.  Then she looked up and saw he was huge as well, larger than even the limousine driver, but old, his hair white and in disheveled tufts.  He motioned her inside.

She smiled and she curtsied, a little, pert curtsy, just the way she’d been taught to in the School.  She started to speak, to introduce herself as she’d been told to, but the man cut her off.

“You are the new domestic,” he said.  He didn’t ask her, just stated it factually in a voice so thickly accented that she nearly laughed, thinking of the limo-man’s comment about Americans. As if, because of her accent, she was not.  But she only nodded.

“Good,” he said—she tried to place the accent, but couldn’t.  He motioned her past him once again, then closed the heavy front door behind them.

“Good,” he said again, shifting the suitcase to his left hand, then holding the other out for her to shake it.  This time she did speak:  “M-my name is Maria…”

What kind of household has Maria ended up in?