We’re pleased to present our next excerpt from Sockhops & Seances – an exclusive look at Jackson Kuhl’s “The Fishers of Men.” As we’re told, Massachusetts may have had its witches—but Connecticut had its vampires. On his escape from the suburbs, Howard  Conway finds out just how true that is. 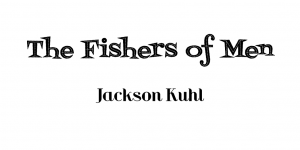 There is no stopping progress. You may buy a plot of land, build a home, raise a family, join a church, and volunteer for the local PTA—but if the authorities determine someone somewhere else is thirstier than you, they will drown your American Dream with no more effort than turning the spigot counterclockwise.

In 1936, when the Norris Dam was completed along Tennessee’s Clinch River, landowners in the century-old trade center of Loyston were relocated and the town submerged beneath the resulting lake. Neversink, New York, population two-thousand, was sacrificed to the waves of the Neversink Reservoir after the residents of New York City grew a little too dry in the mouth. When it was decided the right of a Boston Brahmin to flip his tap handle and fill his glass trumped those of plebeians living in Dana, Enfield, Greenwich, and Prescott, Massachusetts, the four towns disappeared beneath the Quabbin Reservoir. And upon completion of the Saville Dam along a branch of the Farmington River in 1940, the crossroads village of Barkhamsted Hollow, Connecticut—farmhouses, church, and cemetery—vanished underwater so that the citizens of Hartford might wet their lips.

Yet a fortuitous accident of the rising of the Barkhamsted Reservoir occurred along its eastern bank. What beforehand had been a scatter of hillside shacks used sporadically by hunters and outdoorsmen soon found themselves situated along the shore of the new lake, serendipitously increasing their value tenfold almost overnight. Soon what had been rude huts with mossy roofs cobbled together from scrap wood found themselves cladded in clapboard, painted, caulked, and advertised in the city newspapers as weekend getaways for the urban middle-class. Photographs of plaid-shirted men paddling canoes, pipes in mouths, with happy children and adoring wives in the bows promised an analgesic to concrete and smokestack. Five days a week, a man might choke upon an Oxford-striped noose and pledge subservience to the lobotomized gorilla who signed his paycheck, but during the remaining forty-eight hours, he could escape to a cabin along the Barkhamsted Reservoir where he would master fire, dominate a deer, and humiliate a fish.

Howard Conway was the target demographic for these ads, although the scenarios promised were not to be; no manner of persuasion would part Mrs. Conway from her indoor plumbing or convince her that pine air in her lungs was worthwhile compensation for the trouble of warming the baby’s bottle on a wood-burning stovetop. Small matter. Conway was an enthusiastic pursuer of that beast known as the rainbow trout (although brown trout were also considered fair distraction) and as such, felt no remorse during summer months of abandoning wife and babe to drive fifty minutes to his newly acquired single-room shack just yards from the water’s edge. Upon arrival he would pause inside the cabin long enough to throw his bag onto a twin bed before returning outside to don bucket hat, overturn the small rowboat, and push off. It was Conway’s Friday objective that no more than an hour-and-a-quarter’s time should pass between his crossing the threshold of the insurance company and his casting of a line into the Barkhamsted Reservoir.

On these weekends Conway did not mind the absence of his family for in truth he was neither a dutiful husband nor a concerned father. The thrill of wooing his wife dissipated on the wedding day; and his infant child was but a natural consequence of the earlier chase. Nothing between four walls could delight him as much as the one-two-three wave of the rod; no domesticity intrigued him as deeply as tying loop knots or Coachman flies. For him there was no anticipation as intense as watching his line bob in the water like a plucked guitar string, no tension as suspenseful as winding the reel, no release as powerful as landing his prey on the planks of his boat. After that—well, sometimes he would fillet and cook his victims but because he did not greatly care for the taste of fish, more often than not they were thrown into the woods to rot (returning them alive to the water, where they might put their learned experience to use, was unthinkable). Conway found some small joy in his profession as an insurance man selling promises his company never intended to fulfill, but likewise, once the signatures were inked upon the policies, he found himself disinterested in both his clients and their calamities.

On those Friday and Saturday nights, satisfied in his loneliness, Conway would sit outside the shack listening to the lapping on the shore, watching the stars blink into existence in the deepening cobalt. Then he went inside and slept deeply. The lake air and the watery sounds often invoked strange dreams: his limbs would feel heavy and he would claw at the mud covering him, only to find himself among ruins, a dim green illuminating the broken teeth of gravestones. The air was thick and dense—so much so that fish wound lazily through it while long fronds of kelpy weed fluttered in the current. He wandered, a cloud of silt produced by each footstep, past a rusted iron fence and up the stairs of a half-crumbled church.

Then he would awake in his bed in the cabin, the woods outside completely silent, as if a radio or television had been blasting but suddenly switched off just seconds before. Unnerved, sometimes he would grab a flashlight and undo the simple thirty-five-cent latch on the door to shine its beam outside. Gradually the forest noises would return: the rattling of cicadas, the chirping of the spring peepers, the subtle snick and crack of falling twigs and pine cones onto leaves and needles. Sometimes wet snakes of lake weed near his door glistened in the light, and Conway would blame its presence on raccoons. But never would he step far from the doorway; he was too cautious. There were plenty of stories in the local newspapers, glanced at on Sunday morning visits to the tackle shop, of folks vanishing at night, presumably drunk and drowned, or regarding the boy who told his parents he had to make a nighttime visit to the outhouse but must have missed it in the darkness and stumbled into the deep woods, never to be seen again.

Now, there is a bit of relevant Connecticut history of which Howard Conway was ignorant. In the previous centuries, the agrarian population of the state had been plagued by tuberculosis. It was a terrible disease; individuals hale and hearty their whole lives were in months and weeks reduced by fevers and wasting; men accustomed to farm labor were bed ridden with dewy brows and sunken eyes; vivacious women would become exponentially pale and thin. Its victims would lie among sweat-drenched sheets with wheezing breath, coughing blood, every day growing more anemic and weak as if something sipped their souls away. Not for nothing was the disease called consumption.

The more educated among the citizenry understood the condition as a vexation as natural as it was incurable. But others questioned if perhaps it was neither, and wondered why it seemed to afflict whole families; if one fell, so it seemed in time they all did. Both First John and the Gospel of Matthew hinted at many sinister explanations. Might not a spirit come upon the wife or daughter nocturnally, draining her life by ounces and drams? And might not she return after death to torment husband or father, parent and child? Who would deny a former loved one entry at the window sill or fail to embrace their lost sweetheart appearing after the gloam? What if, as the dying lay emaciated and white in rust-blotched bed clothes, his recently deceased sister lay plump and pink six feet beneath the ground?

What is the truth behind the Connecticut vampires?

What lurks BENEATH the surface of the Barkhamsted Reservoir?