We’re pleased to present our next excerpt from Sockhops & Seances – an exclusive look at Jaap Boekestein’s “Call the Dawn, Dear Brother.” A jazz trumpeter is hired by a mysterious brotherhood to play as dawn blooms over Las Vegas. But why? What do they want from him? 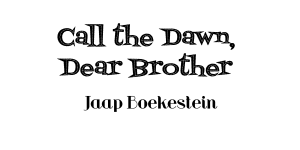 Clem just started his horn solo when the guy with the fez tripped and broke his arm. It happened in the big room of the Las Vegas Fremont Hotel, at the entrance with the two steps leading down the gambling pit. Because Clem was standing on the stage, he saw the whole thing happen. No-one else in the band did, and not many, if any, of the gamblers. The staff of the casino was trained to take care of distractions with maximum speed and minimum fuss. Nothing to keep the customers from spending their bucks.

It wasn’t destiny; of course not. Just a drunk who slipped and somehow managed to break a few bones on an inch-thick carpet. Stuff like that happened all the time. This was Vegas. Anything could happen.

Tonight the hotel was overrun by fraternity guys, having their national convention. The American League of something something. Red fezzes and colorful sashes everywhere, drunks, laughter, goof balling, the usual. Last week it was dentists, next week it would be car salesmen or coin collectors. It didn’t matter much: the men enjoying the fleshpots of Sin City were all the same. They loved Vegas and Vegas loved them, or at least their money.

The guy who slipped the exact moment when Clem started to blow his horn, wore a red fez.

Clem finished his solo without spending another second thinking about the drunk. He sat down again and the band continued with The Sheik of Araby. The gamblers kept on playing. This was Vegas, the gambling Mecca in the desert, the booming town, the Atomic City. It was 1955 and it was happening.

From this day forward the U.S. Atomic Energy Commission has been authorized to use part of the Las Vegas Bombing and Gunnery Range for test work necessary to the atomic weapons development program.

Test activities will include experimental nuclear detonations for the development of atomic bombs—so-called “A-bombs”—carried out under controlled conditions.

Tests will be conducted on a routine basis for an indefinite period.

The band was finished around one A.M. and Clem and the other guys were packing their stuff when Charlie, one of the stagehands, approached him.

“There are a few guys wanting to see ya, Clem.” Charlie originated from Chicago and although he had lost most of his hair over the years, he had never lost the thick accent.

“An angry father with a shotgun?” joked Rick, one of the sax-players.

“Or that guy from last week’s poker game?” Fred, the drummer, said. “He wants his money back?”

Clem waved his buddies away. “What kind of guys, Charlie?” He wasn’t expecting any angry dads or gamblers, but it was pretty unusual for someone asking for him. It wouldn’t hurt to ask. This was Vegas, anything could happen.

The balding stagehand shrugged. “A few of the guests. They wear those funny red hats. A fat little four-eyed guy and his buddy. Small fry. They wanted to see the horn blower of the band and you are blowing those pipes, so I guess that’s you.”

“You got a fan, Clem,” Fred joked. “Got to be a producer with a record deal. The new Perry Como, with a horn instead of the voice.”

“Yeah, yeah.” Clem finished packing. “That will be the day. Let’s see what they want. You guys are still going to have drinks in the Diamond? Maybe I’ll join you later.”

The Diamond was the afterhours watering hole for the lower Las Vegas showbiz crowd. The musicians, the dancing girls and other performers who weren’t in the big league. You wouldn’t find Sinatra in the Diamond.

“Sure, daddy-o, we will save you a seat. Don’t take too long, or we will have drunk the place dry and charmed all the ladies.”

“I hope to live to see that wonder happen. I’ll be there, or not.”

After securing his horn in his locker, Clem made his way to the backstage entrance, joking and saying goodbyes to the other band members.

The two guys weren’t wasted, but they had made a nice start. Their ties were loosened, and one had spilled a drink on his suit. They looked exactly like a thousand other visiting guys in Vegas, except they wore a red fez and a sash with embroidered weird symbols. And even that wasn’t anything special in Vegas.

“You fellows are looking for me?” Clem asked.

Four eyes, the guy with the thick spectacles, smiled and offered his hand. “Hi there, you are a horn blower?” The other guy was pretty nondescript. Just your ordinary run of the mill guy.

The spectacled guy took Clem’s hand and pumped it. “I’m so glad to see you, sir! I am brother Felix and this is brother Wulf, we are from the Grand Order of the American Dawn!”

“Nice to meet you guys,” Clem said. He hadn’t the faintest idea what the Grand Order of Whatyoucallit was. “I’m Clem Jules. What can I do for you fellows? You liked my music?”

“Wonderful! Wonderful!” brother Felix assured Clem. “Mr. Jules, Clem, we are in desperate need for a horn blower this night. Our regular horn blower, dear brother Lux, slipped and broke his arm. He is in hospital right now, thus being unable to perform his sacred duties. And without horn to call the light, our sweet United States of America will be plunged into a thousand-year darkness!”

“At least,” said brother Wulf. He had a gruff voice. Clem wondered if he maybe was an undertaker in real life. He looked and sounded like one.

“Yes, at least,” brother Felix confirmed. “And that is why we turn to you, my dear man. We need a horn blower tonight, and you are one. Can you, so to say, save our bacon? And the bacon of millions of your fellow countrymen of this proud and beautiful nation?”

He sells insurance for a living, Clem decided the talkative brother Felix did. An insurance salesman and an undertaker. It sounded like the beginning of a joke.

“So, if I understand you fellows right, you want to hire me tonight to play horn?”

Both brothers of the something order of thatsnotit nodded in union.

“If you insist there can be a financial compensation,” brother Felix said. “It’s isn’t tradition of course, but in desperate times one needs to take desperate measures.”

“How long do you guys need me? Is it for a party?”

“One could say so. It is a most joyous occasion! A celebration of American greatness! And for the duration…Well, the event takes place at the end of the night, but you’re not a member of our Order and to blow the Horn you will need to be initiated. Normally that would take six months, but we will make do in a few hours.”

Clem smiled. The whole thing sounded wacky, but he liked wacky. If there was a party, there no doubt was booze. And making a few bucks on the side didn’t hurt either.

“I’m in for sixty.” He didn’t earn sixty with the band in one night, but these guys didn’t know that. And they just told him they were desperate. They weren’t going to find another horn player in the middle of the night.

“Sixty? One can do!” Brother Felix shook Clem’s hand again. “Welcome on board, Clem. I am exalted to have you. Come, we don’t have much time and quite a few things to do.”

“I’ll have to pick up my horn,” Clem said, making a gesture in the direction of the backstage locker room.

“No need, dear man. No need! The Horn is upstairs, in the top floor suite. It’s ceremonial, cut from the fang of the ancient world serpent Jörmungandr.”

They hired the top floor suite? They must have wagonloads of money. I should have asked eighty.

“Good, good!” brother Felix waved his hands in excitement. “First we are going to see the Lady. A horse, a horse. My kingdom for a horse. We will need to drive a bit.”

“That guy who broke his arm, did that happen in the gambling pit, earlier this evening?” Clem asked while they walked to the exit of the casino. “I happened to see someone slip. He wore the same outfit as you.”

“You did? That must be a sign, for certain! Brother Wulf, Clem, I feel the Lords and Ladies are smiling on our endeavor!”

These guys were really wacky.

what is clem in for?

Can he really prevent a thousand years of darkness?