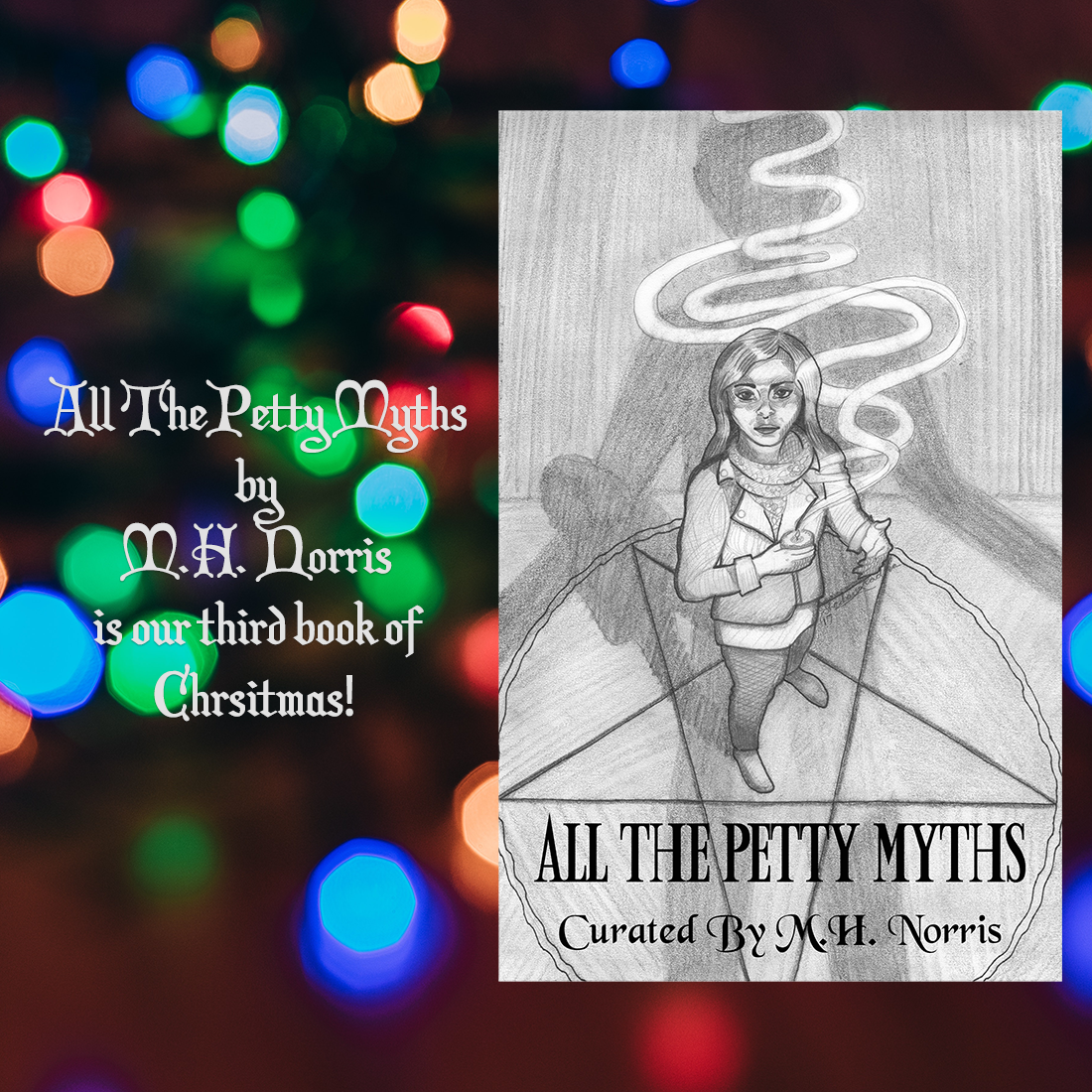 M.H. Norris Brings Myths and Mysteries to Our Books of Christmas with All The Petty Myths!

10 days ’til Christmas and we’re back! Today we’ve given a nod to an old Christmas tradition by featuring the start of M.H. Norris’ mystery series, All The Petty Myths!

Our third book of christmas is all the petty myths by m.h. norris 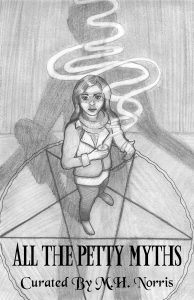 Once upon a time, families gathered around the tree and told ghost stories full of myths and legends. It’s referenced several times in various Christmas songs (the most notorious being “The Most Wonderful Time of the Year”).

In this collection, M.H. Norris brings the “Scary Ghost Stories” along with Marc Sorando, D.J. Tyrer, and James Bojaciuk. Get ready to mesh myths, legends, and folklore with mysteries. A hitchhiker appears to a trucker, Holmes ends up on an unusual case, how could someone die in a locked room, and perhaps you shouldn’t try everything you find on the internet.

Let’s take a look at the back cover description.

Lurking in your hometown and countless others, urban legends and folklore are all around us.

To many, they exist solely as myth. But not for all. Sometimes a body is found, apparently killed by something from stories. Sometimes someone goes missing, all the clues pointing to something only spoken of around campfires. Then the police are called, or a detective, who must discover if there really is something in those stories…

Featuring M.H. Norris’ “Midnight,” which debuts her new series. Dr. Rosella Tassoni, a Forensic Mythologist, is hired by the FBI to consult on a case where seeming old world folklore is cross-contaminated by internet fauxlore. High school students are being murdered. Will the experience break her?

A detective who wishes to write his own mysteries, but can’t bring his words to life, is now trapped in a “Locked Room” mystery by Marc Sorondo. Is the killer a ghost, or a clever human?

Sherlock Holmes and his partner’s partner, Mary Watson, investigate a mad artists. He insists his doppelganger has replaced him, and that he himself is locked away in his painting. How can he see a painting which no-one else can see? James Bojaciuk answers this question in “Doppelgangers (and Other Artistic Piffle).”

A mournful soul on a lonely highway, calling for death, is the center of a murder case in D.J. Tyrer’s “Tuttle and Gretel.” What is the Vanishing Hitchhiker?

We caught up with M.H. Norris and asked her some questions about this collection.

Back when we were first starting 18thWall, James Bojaciuk came to me and asked me if I had any ideas for short story collections that we could do with 18thWall. This was around the time I was writing my first book and I wanted to do more with mysteries.

I was also into mythology, and wanted to find a way to combine them. It wouldn’t be until much later that I realized that what I was trying to do was make a more science based Scooby Doo.

So there was mythology and mysteries. I wondered if we could combine them into a series of cases, after all in the early days CW’s Supernatural had a case of the week where they did just that. In Supernatural’s case, whatever was going bump in the night was real, but don’t ask Rosella to tell you whether or not those things are real. ,

The opening scene. There’s floating around an early version of the lecture Rosella gave in that scene but then in later versions, it became so much more. Dr. Rosella Tassoni is good at investigating, but there’s just something about writing her when she’s lecturing. She slides into this zone and takes me along for the ride and I have a blast writing them and learning about the subject matter so that I can help her give the best lecture she can.

Can you tease what’s ahead for Rosella?

Only a bit, because the events of Midnight really do influence her in ways she couldn’t have imagined. I’m finishing her next adventure and you’ll see her a few months down the road and it’s a very different Rosella than you met in Midnight. Part of my challenge is bringing her back from that and it’s been interesting to explore how the events affected her.

Mysteries and mythology is an unusual combination. What makes them work so well together?

If you look at some of the most infamous serial killers – Jack The Ripper, the Axeman of New Orleans and Zodiac being  prime examples – you notice that some of what has made them so notorious is that they’ve almost become mythical in their own rights. The Axeman openly declared himself a demon, and the supposed letters by the Ripper openly declare his address to be “From Hell.” This doesn’t stop there. We like to mythologize so much crime. Shoot, Scooby Doo has gone for decades on the principle.

Mysteries and mythology aren’t as exclusive as people think they are.

Mysteries often thrive by what hides in the shadows. Who did it? If we knew that right away, there would be no mystery. Myths are often there trying to explain what we don’t know. The two share enough similar themes that they work together, it’s just that people haven’t taken advantage of it nearly enough.

You included other stories along with Dr. Rosella Tassoni’s debut. Tell us about those.

I was lucky to get some wonderful submissions. I couldn’t have done this book without these guys, and their stories still make me happy to think about.

D.J. Tyrer gave a unique take on the Woman in White. While this is one of the most common urban legends, he takes a route with it that isn’t often seen.

Marc Sorando gave me a locked room story, something I really didn’t expect. I was so excited to see this story and loved it from the moment I saw it. Even a few years later, I still reread it. I’m so honored to include him in the collection.

Lastly, James Bojaciuk included a story at my request. Sherlock Holmes faces something that makes for a rather unique Holmes adventure. He has a way of writing in the style of that era and it was a nice fit.

We want to thank M.H. Norris for answering our questions.

all the petty myths is available in both print and as an ebook.

Tune in tomorrow to see what our fourth book of Christmas is!