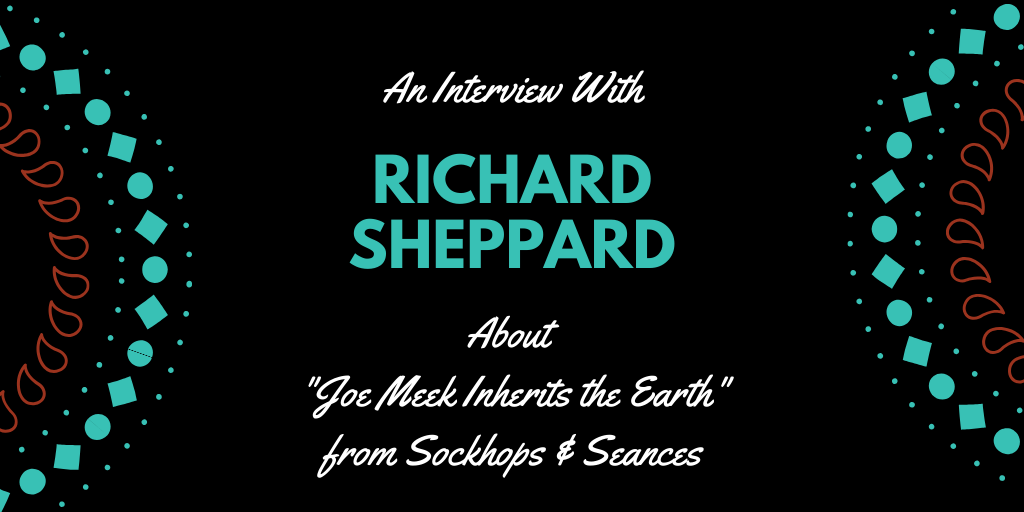 ‘Joe Meek Inherits the Earth’ is a detective story set in London in 1952. The detective is a former American GI who decided to stay in London after demobilization. He his hired to find a young man named Joe Meek who has gone missing somewhere in the city. Hampering this investigation is Joe Meek’s own unbalanced nature, the secretive world of the 1950s gay scene and a thick smog that has brought the city of London to a crippling standstill.

I’ve always been fascinated by Joe Meek. He was a man ahead of his time, whose music foresaw a lot of the electronic dance music of recent decades. Not only was a he a musical prodigy, Meek was also obsessively interested in UFOs, spiritualism and unexplained phenomena. Such an eclectic blend of interests made him irresistible to write about. He also had substance abuse issues later in life and was responsible for the murder of his landlady before taking his own life. His music lives on though, and the space-age weirdness of ‘Telstar’ and his one surviving album ‘I Hear a New World’ provide an interesting counterpoint to the immediately accessible and lovable Beatles.

As Joe Meek was gay in an era when homosexuality was a prosecutable offence, I used his disappearance as an excuse for the investigating detective to discreetly explore the gay subculture of the time rather than use official channels. The slang that the barman uses in the Frampton Arms is called ‘polari’ or ‘palare’ and was a kind of secret language, like a thief’s argot, used by gay men and women to recognize each other. The idea of a secret language fascinated me, so I was very happy to use it.

The great London smog of 1952 was social and ecological disaster that was caused by a ‘perfect storm’ of bad weather, inner-city overcrowding and over-industrialization. Many people died in accidents over those few days, and many more died later of respiratory illnesses. A lot of people have a romanticized Victorian idea of foggy London, so I liked the idea of using this unusual, dangerous time as a backdrop.

I liked the insistence of historical realism in the original call for stories. When you’re writing about something that is in living memory for some, it is important to get the details as accurate as possible. Hence all the train changes and long waits that my protagonist has to go through to get from one side of London to another, as well as detail around historical locations like The Crystal Palace and the Frampton Arms.

I have been fascinated with the post-war period for quite a while, so I jumped at the chance to set a story there. London was taking its time to rebuild after the Blitz, and whole streets had yet to be rebuilt and rubble was left piled up from destroyed homes. The war had displaced many people, but also opened new opportunities to travel and re-establish themselves for others, so I wanted to have a protagonist who was displaced but found themselves at home somewhere thousands of miles from where they were born.

My story, ‘The Lighthouse’ is available from Egeaus Press’s ‘The Book of the Sea’. My wife and I produce the Hallowed Histories Podcast about English folklore, which can be found on iTunes, spotify and any decent podcast finder. We’re also producing The Constant Reader Podcast about the works of Stephen King which will be available in September.