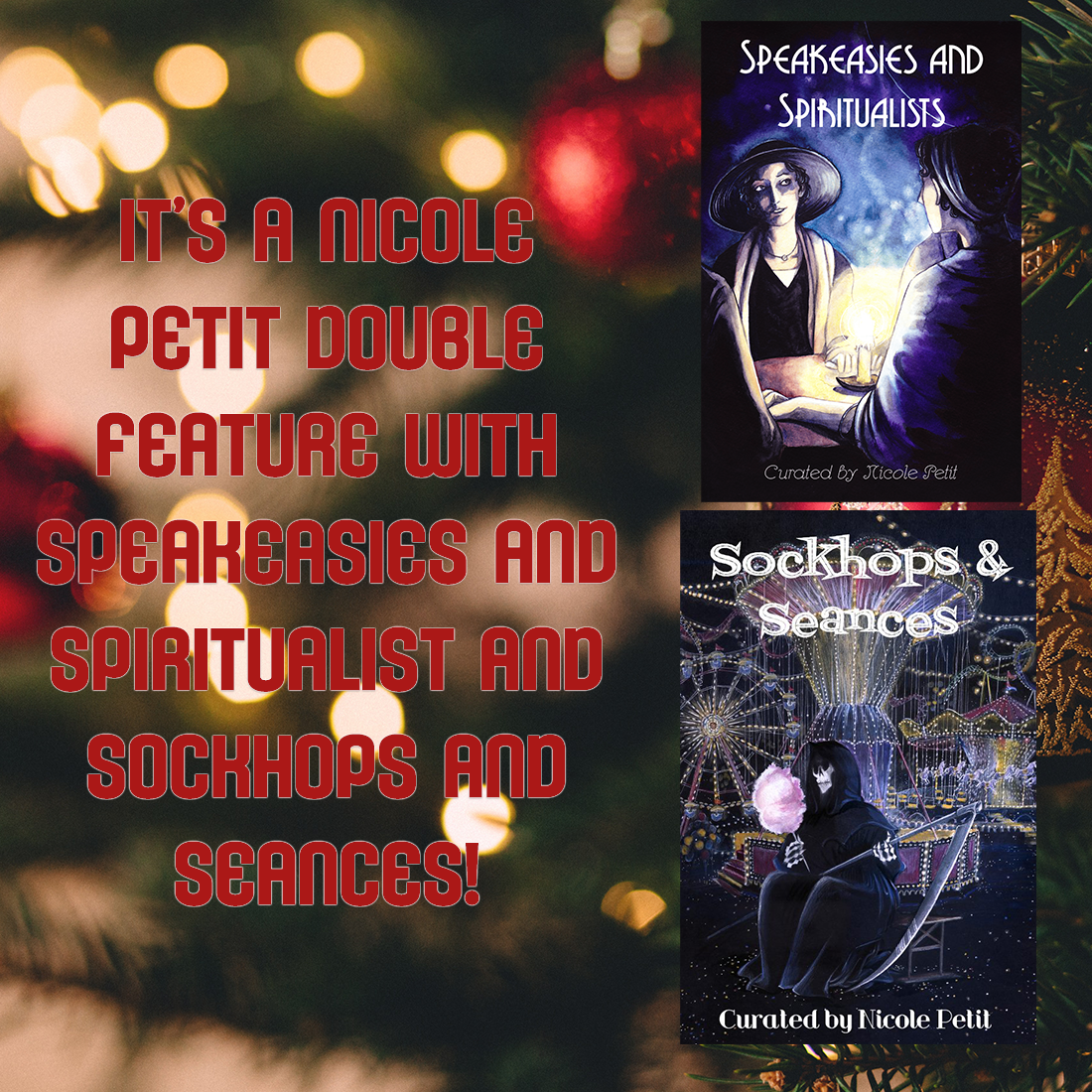 Since we’re only  three days from Christmas, we have a special gift today. You can open to of your gifts today!

Because today we have a Nicole Petit double dip, looking at two of her books with supernatural stories set in the past. With the 1950s we have her new anthology, Sockhops & Seances, and with the 1920s we have her award-winning Speakeasies & Spiritualists. Feel free to wrap up with both as you enjoy your last weekend before the big day. 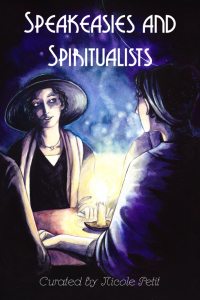 “Most mediums with their spurious and specious methods, with their ghostly trumpets and spectral hands, hold few secrets–and fewer terrors.”
– Rose Mackenberg, “Exposing the Weird Secrets of ‘Mediums’ and ‘Spirits’”

She was Harry Houdini’s chief investigator. She testified before congress about psychic fraud, and discovered all the tricks of the seance trade.

Psychic investigators on the trail of the trail of a jazz musician who seems to have crawled from the grave. Amateur, livingroom seances going very wrong when mixed with grief for those who died in the war. Strange men warning out of Florida storms. Dream Demons stalking Chicago, feeding off bar-dwellers, and floors painted with mystic stars.

I was already in the process of refining the concept for Sockhops and Seances when I stumbled onto an Atlas Obscura article about Rose Mackenberg. Rose was one of Harry Houdini’s “spook spies” in the 20’s, a time where spiritualists and the occult was gaining a lot of traction. Houdini, disappointed with so many frauds that took advantage of his desire to contact his dead mother, hired several men and women to test the spiritualists of the time. This fascinated me and I decided to turn what had originally been a one shot anthology about the supernatural in the 1950s into a series of anthologies where we could explore each decade in a similar, alliterative fashion.

Tell us about the authors we can find inside!

I was lucky to have a wonderful group of talented authors in the book, and they all did such good work. The stories in the book are by Brendan Foley, Donald J. Bingle, John Linwood Grant, Jon Black, Josh Reynolds, William J. Martin, Aaron Smith, and Peter Rawlik. They all provided stories taking looks at everything from looks at the state of New York City to the kinds of demons you might meet at a bar. James Bojaciuk and M.H. Norris gave me stories about Mackenberg herself, and her investigations into spiritualism. And, lastly, we reprinted two of Mackenberg’s own articles.

Speakeasies & Spiritualists IS AVAILABLE IN BOTH PRINT AND AS AN EBOOK. 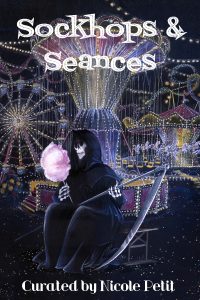 Award-Winning curator Nicole Petit presents the ginchiest look into the supernatural world of the 1950s.

Between poodle skirts and white picket fences, there should be only one place to meet a monster: at the local drive-in. Captured by technicolor, these creatures of the night are banished by hanging up the speaker.

But there are other forces at work in the night. The ghost of a wooden roller coaster haunts the theme park that tore it down. Hot-Rodders race a particularly hellish speed demon. An American P.I. in London braves the fog to find a man chasing lights in the sky. A small town boy detective takes on three impossible, eldritch cases. There’s no telling what’s out there, beyond the drive-in’s screen.

Well, I was driving along one day and the title popped into my head, I’m a sucker for alliteration and the title sounded catchy enough that I decided to run with it. The 50s is an interesting setting for the supernatural, while it doesn’t have the fad appeal that it did in the 1920s like the setting of Speakeasies and Spiritualists, it still hung around in intriguing ways. What stuck out to me is the vast amount of movies of the time from teen comedies like The Ghost of Dragstrip Hollow to cult classic House on Haunted Hill. While the 50s is probably best known for its explosion of monster movies, spooks and haunts found their way into cinemas as well.

What makes the 1950s such a perfect time to set supernatural stories?

I think it’s more that the 50s is a pretty neat setting for any story. It’s a period that has really cemented itself in the American cultural consciousness especially, albeit in a rather vague and rose-tinted way. All our Christmas songs come from around that time, sitcoms like Leave It To Beaver and the nostalgic Happy Days continue to air and most people have picked up the feel of those even if by osmosis. But really, there’s a lot to say about the era, from exploring the post-war boom to looking at the cultural shifts that would set the stage for the sixties.

Word from the bird is that the teen culture of the 50s is the ginchiest. I dig the sockhops and the poodleskirts, the cool cat greasers and meet ups at the drive-ins. Listening to the latest rock’n’roll hit at the diner with a coke float and all that was really copacetic. Also I like the slang.

Can you walk us through this book? What should readers expect? Who contributed to it?

Of course! We have stories from such amazing authors as Kara Dennison, Sophie Iles, Jaap Boekestein, Richard Sheppard, James Dorr, Josh Reynolds, Joshua Wanisko, Jackson Kul, M. Lopes da Silva, and Jon Black. They all explore a different aspect of the time from early roller coasters (which are haunted) to drag-racing teens in Texas.  They did a beautiful job capturing so many sides of the decade.

WE WANT TO THANK nicole petit FOR ANSWERING OUR QUESTIONS.

Sockhops & Seances IS AVAILABLE IN BOTH PRINT AND AS AN EBOOK.

TUNE IN TOMORROW TO SEE WHAT OUR next BOOK OF CHRISTMAS IS!