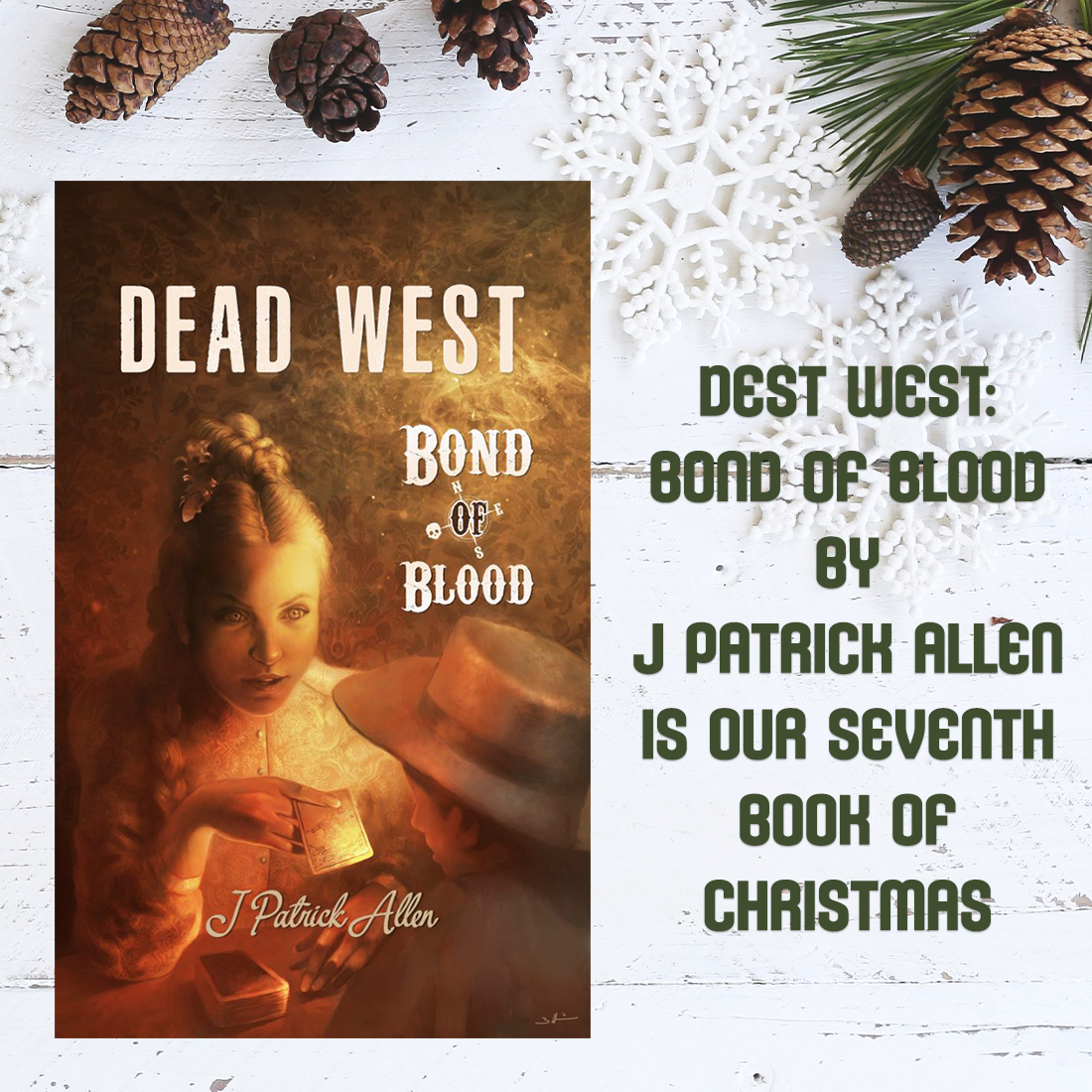 A Frontier Christmas with Dead West: Bond of Blood!

The countdown is getting closer now as we are official 8 days ’til Christmas and we’re back! With less than a week before Christmas, we are bringing you the first of a set with Dead West: Bond of Blood by J Patrick Allen!

j patrick allen brings us a tale of the western dark fantasy in dead west: Bond of Blood 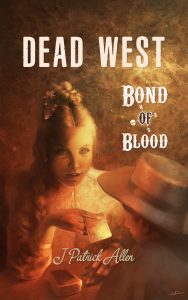 Virgil cleared his throat and patted me on the shoulder. “In the meantime, welcome to the Fraternal Order of the Knights of Charlotte.”

Dead Men who Cannot Die, Blazing Winchesters, and Legends of the Old West

Everyone brought something from the old country. Grandfather’s watch, and grandmother’s china; great-grandfather’s folklore, and great-great-grandmother’s fairy tales. What is never discussed, however, are the undying characters of the folklore: nix and fairy, goblin and vampire, dragon and eldritch things who all came to America’s shores in time with the rhyme of their tales.

The Knights of Charlotte hunt those things, ensuring what came from the dark stays in the dark.

Two of their knights have returned from the wild. Battered, bloody, and barely alive after West of Pale, Charlie and Samuel return to headquarters. It is time for one of the Knights’ meetings, a reunion for old comrades.

But two problems are waiting for them. First, their coffers run dry. Hunting folklore’s refuges doesn’t bring riches, and a rich man’s inheritance has expired. Second, an old comrade seems to have returned from the grave, fire in his belly supplanted by a fire a touch more hellish. He rampages across the west, refusing to die.

The Knights must ride out on one last quest…

Dead West: Bond of Blood picks up where West of Pale and the award-winning short story “Dragonfly Shadow” left off. Also includes a bonus Carnacki: The Ghost-Finder short story!

we sat down with j patrick allen to chat about the first book in the set.

Tell us more about Samuel!

Samuel is a hard read. He was born and raised in Elizabethtown Kentucky. Kentucky itself was a border state in the war–the very heart of brother-versus-brother territory and so the war had a lot of personal meaning to the folk fighting in there. As we learn in book 2, Samuel joined for revenge. I think seeing what war was really like burned that out of him. He never fought for any sense of duty, any loyalty to state. Samuel didn’t much truck with the entire reason folk went to war to begin with. But he was young and he was angry. In Samuel’s mind that fire needed to be pointed somewhere. He’s turned what hate he had for the Yankees that killed Savannah in on himself. Besides, the last days of the war taught him there were worse things out there. He was never a man who spilled blood out of sense of duty or honor. Samuel Henry Clayton only ever killed because he thought he had to.
A lot of people tell me when they read these books that they see me in Charlie. But if I had to choose a character I identified more with, it would be Samuel. The modern reader will clearly recognize the earmarks of Post Traumatic Stress Disorder, something I’ve also fought in real life. It’s a long road to recovery, but the message with him is that with the love of others and yourself, it is possible.

Is there a particular section that stands out?

I just re-read the book while warming up to work on the next in the series. The point at the beginning where the boys recite the oath that marks the beginning of each Charlotte Conference took me by surprise. I have genuinely no recollection of writing it and I loved it.

This novel introduces a supporting character who has proven very popular with readers. Tell us a bit about her, and what inspired her?

Ahh yes, miss Maddy Irving. I love a good Femme Fatale. Ginny served the role originally, but I wanted a recurring character. There was a growing fascination with the Supernatural in the mid 19th century, in part because of the growing Spiritualism movement and Americans running in to more and more groups of people who did not share their beliefs. I loved the idea of a woman who was part of the community not because she was herself supernatural, but because she was obsessed with the supernatural. In my mind she became part Catwoman, part Annie Oakley, part Fujiko Mine. Plus, I love the idea of someone who frustrates Samuel as much as he frustrates everyone else.

WE WANT TO THANK j patrick allen FOR ANSWERING OUR QUESTIONS.

dead west: Bond of Blood IS AVAILABLE IN BOTH PRINT AND AS AN EBOOK.

TUNE IN TOMORROW TO SEE WHAT OUR Seventh BOOK OF CHRISTMAS IS!